As we highlighted in an article two weeks ago (farmdoc daily, July 9, 2014), there has been much discussion this summer about the prospects for what can only be described as spectacularly high U.S. corn yields. We examined summer weather conditions in the six years from 1960 through 2013 that had the largest positive U.S. average corn yield deviation from trend. The objective was to determine if summer weather conditions are on track to produce another such high yield in 2014. Our conclusion was “… that very high U.S. corn yields have been associated with summer precipitation that was near to slightly above average and summer temperatures that were well-below average in Illinois, Indiana, and Iowa.” With regard to 2014 we found that “…June weather conditions in Illinois, Indiana, and Iowa were not entirely consistent with those experienced in the previous six highest yielding years relative to trend. This was particularly true for Iowa, which received over twice its long-term average precipitation in June.”

While not receiving quite as much attention, the USDA is currently forecasting a new record yield (45.2 bushels) of soybeans in 2014, exceeding the 2009 record of 44 bushels by a large margin. Like corn, high soybean yield expectations this year are based on generally favorable growing conditions to date and on the high percentage of the crop rated in good or excellent condition. The USDA’s Crop Progress report of July 21 estimated that 73 percent of the crop in the 18 major producing states was in either good or excellent condition as of July 20. That is the largest percentage in those two categories for that week since 1994, when 83 percent of the crop was rated in good or excellent condition, the third largest since the report was initiated in 1986, and 14 points above the average for 1986 through 2013. The purpose of the today’s article is to specifically identify the summer weather conditions that contribute to high U.S. soybean yields and compare weather conditions to date in 2014 with those previous very favorable conditions. We follow the same procedures that we used in our previous analysis of corn yield prospects.

Figure 1 shows the annual average U.S. average soybean yield for the period 1960 through 2013, with a linear trend fit to that yield data. U.S. soybean yields have increased by an average of 0.39 bushels per year since 1960 and a linear trend explains nearly 88 percent of the annual variation in the average yield. Given the trend yield estimates found in Figure 1, we want to identify the five years from 1960 through 2013 when the U.S. average yield had the largest positive deviation from the calculated trend yield. The deviation from trend can be calculated in terms of bushels or percentages. The five years since 1960 with the largest positive difference between actual and trend yield in bushels were 1992, 1994, 2004, 2005, and 2006. The five years with the largest percentage deviation included 1961 and 1979, but not 2004 and 2006. As a result, we include all seven years in the analysis, as indicated in Figure 1. Interestingly, three years are included in the high yielding years for soybeans that were not included for corn , and three years were included in the corn analysis that are not included for soybeans. The numerical deviations from trend yield for soybeans are summarized in Table 1. Yields in those seven years were 2.3 to 5.7 bushels above the calculated trend, with an average difference of 3.0 bushels. Yields were 6.1 to 15.9 percent above trend, with an average difference of 8.8 percent. 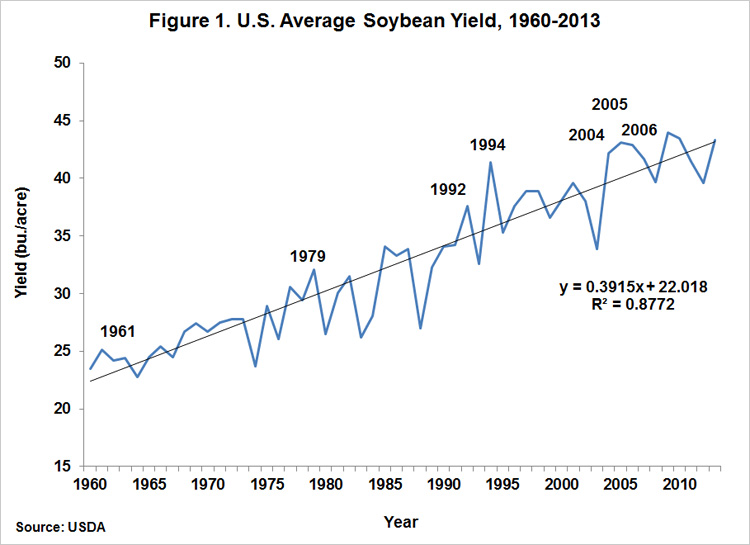 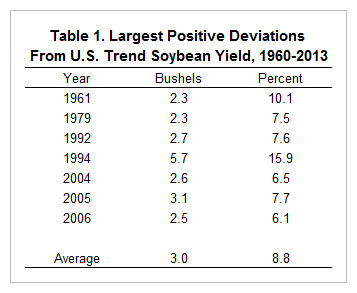 Next, we identify the summer weather conditions in each of those seven years that likely contributed to the very large U.S. average soybean yields relative to trend. U.S. growing season weather conditions for each of those years for the entire soybean producing region are difficult to summarize. Following the procedure used for corn, we use precipitation and average temperature for each of the months of June, July, and August in the states of Illinois, Indiana, and Iowa as an indication of growing season weather for the entire production region (Table 2). The shortcomings of examining weather conditions for only a portion of the production area are recognized. Still, these states account for about 30 percent of the soybean harvested acreage. 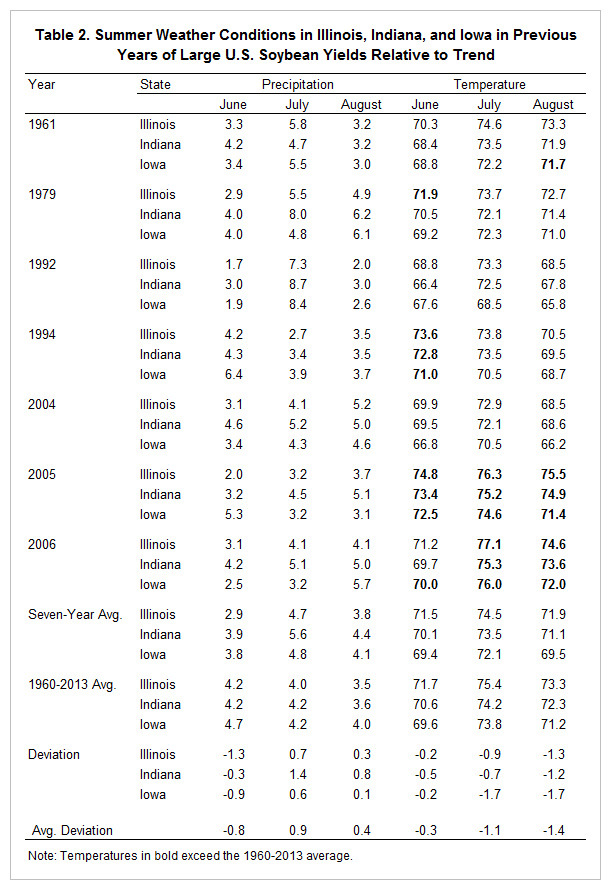 The data in Table 2 paint an interesting picture of growing season weather in these three states in years of high soybean yields. First, extreme monthly precipitation amounts did not occur frequently. The highest monthly precipitation was 8.7 inches in Indiana in July 1992 and the lowest amount was 1.7 inches in Illinois in June 1992. Comparing the average precipitation for all three states for the seven high-yielding years to the average for the entire 54-year period we find that June was slightly drier than average and July and August were slightly wetter than average.

Finally, we can compare what we know about the 2014 growing season so far with the growing season in previous high yielding years. Preliminary weather data for June 2014 in Illinois, Indiana, and Iowa are compared to the average June weather in those states in the seven previous years of very high soybean yields (Table 3). June precipitation was well above both the 7-year average and the long-term average in all three states. This was particularly notable in Iowa, which received over nine inches of precipitation, about twice its average for the month. The three-state average precipitation in June 2014 was double the average in those seven high-yielding years. Excessive June precipitation extended beyond Iowa to include Minnesota, Nebraska, and Wisconsin. As noted above, the largest positive deviations from trend yield have been associated with moderately below-average June precipitation, so the excessive levels received in these states this year may well have reduced yield potential. Average temperatures in June were not excessive, but were above the long-term average as well as the average in the previous seven years of very high soybean yields. Like corn, the 2014 growing season did not start off in June with as uniformly optimal conditions as the seven growing seasons that produced the highest soybean yields relative to trend yield since 1960. 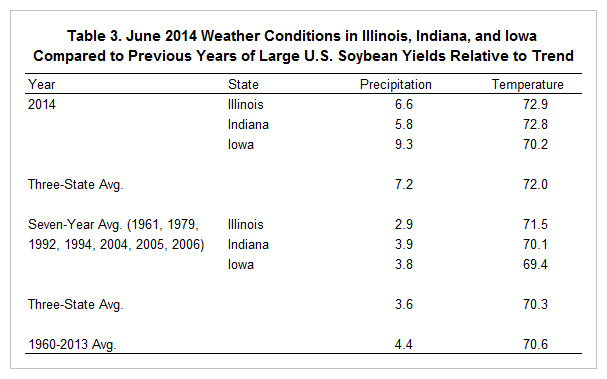 Expectations of a U.S. average soybean yield above trend value in 2014 seem justified by current crop condition ratings. A yield above trend by as much as the average (3.0 bushels) of the previous seven highest yielding years relative to trend since 1960 would be 46.6 bushels per acre. However, June weather conditions in those high yielding years tended to be moderately dry and cool, while June 2014 in was wet and warm. This was particularly true for Iowa, which received over twice its long-term average precipitation in June. Weather conditions so far in July have been mixed. Temperatures in major growing areas were below average early in the month, moved to above average this week, but are forecast to retreat again next week. Average July temperatures are expected to be about 2.5 degrees below average. Rainfall in the first three weeks of July was slightly above to slightly below average for most areas, but was well below average in some key northern states. History suggests that cool, moist conditions are needed in August for the U.S. average yield to be equivalent to that of the other high yielding years examined in this article.