There has been widespread discussion in recent weeks that the U.S. average corn yield in 2014 will set a new record, perhaps exceeding the previous record yield of 164.7 bushels in 2009 by a considerable margin. High yield expectations are based on generally favorable growing conditions to date and on the high percentage of the crop rated in good or excellent condition. The USDA’s Crop Progress report estimated that 75 percent of the crop in the 18 major producing states was in either good or excellent condition as of July 6. That is the largest percentage in those two categories for that week since 1999, the fifth largest since the report was initiated in 1986, and 10 points above the average for 1986 through 2013. The high crop ratings have undoubtedly contributed to the continued downward slide in corn prices.

In a farmdoc daily article (July 2, 2014), Carl Zulauf provided estimates of the level of “high” U.S. average corn yields under good growing conditions, which turned out to be in the low- to mid-170s range. In related and earlier work (farmdoc daily March 25, 2014), Gary Schnitkey showed that for the U.S. to have an average corn yield significantly above trend the majority of corn producing counties must have above trend yields. The purpose of the today’s article is to specifically identify the summer weather conditions that contribute to high U.S. corn yields and compare weather conditions to date in 2014 with those previous very favorable conditions.

We first start with a brief discussion of the calculation of the trend of U.S. average corn yields. The most common way to identify the trend is illustrated in Figure 1. Actual average yields over a specified period of time are plotted and a trend line is fit to those yields. In this case, yields from 1960 through 2013 are plotted and the best fit is a linear trend. As indicated by the equation in Figure 1, the U.S. average corn yield increased by an average of 1.7928 bushels per acre from 1960 through 2013 and the trend yield explained 88 percent of the variation in actual annual yields (R2 = 0.8804). The calculation of the linear trend and the fit of the trend may vary according to the time period considered. This method of calculating trend is “unconditional,” in the sense that the influence of weather conditions and technology on the average yield in each year is not explicitly disentangled.

An alternative for trend calculation is to measure the underlying trend in corn yields associated with changing technology and management practices independent of variation in weather conditions from year-to-year. Typically, a regression crop weather model is estimated in order to separately estimate the influence of weather and technology on yield. These models basically “correct” for weather so that the coefficient associated with time is expected to more accurately reflect the underlying trend in corn yields. Since the influence of weather on yield is not symmetric (bad weather reduces yield more than good weather increases yield) the trend calculation using this methodology will be slightly higher than the trend calculation using the fit of actual yields. For example, the 2014 trend yield calculation based on the equation in Figure 1 is 159.5 bushels per acre. Trend yield calculation using a regression crop weather model, like the ones presented in this earlier research report, would tend to be higher but not by a large amount. The more common and simpler unconditional method of trend calculation of actual yields is sufficient for the analysis conducted in this article. 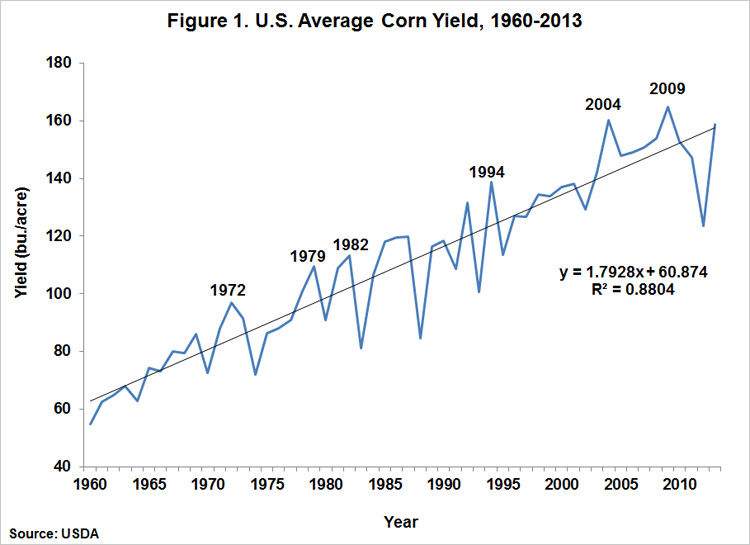 Given the trend yield estimates found in Figure 1, we want to identify the five years from 1960 through 2013 when the U.S. average yield had the largest positive deviation from the calculated trend yield. The deviation from trend can be calculated in terms of bushels or percentages (see farmdoc daily April 17, 2013 for further discussion of this issue). The five years since 1960 with the largest positive difference between actual and trend yield in bushels were 1972, 1979, 1994, 2004, and 2009. The five years with the largest percentage deviation included 1982, but not 2009. As a result, we include all six years in the analysis, as indicated in Figure 1. The numerical deviations from trend yield are summarized in Table 1. Yields in those six years were 11.1 to 18.8 bushels above the calculated trend, with an average difference of 14.1 bushels. Yields were 9.4 to 15.2 percent above trend, with an average difference of 12.3 percent.

Next, we identify the summer weather conditions in each of those six years that likely contributed to the very large U.S. average corn yields relative to trend. U.S. growing season weather conditions for each of those years for the entire corn producing region are difficult to summarize. Here we use precipitation and average temperature for each of the months of June, July, and August in the states of Illinois, Indiana, and Iowa as an indication of growing season weather for the entire production region (Table 2). This is similar to previous analysis of corn yield prospects that we have provided (farmdoc daily July 19, 2011; June 26, 2012; September 9, 2011). The shortcomings of examining weather conditions for only a portion of the production area are recognized. Still, these states account for about 35 percent of the corn acreage harvested for grain. 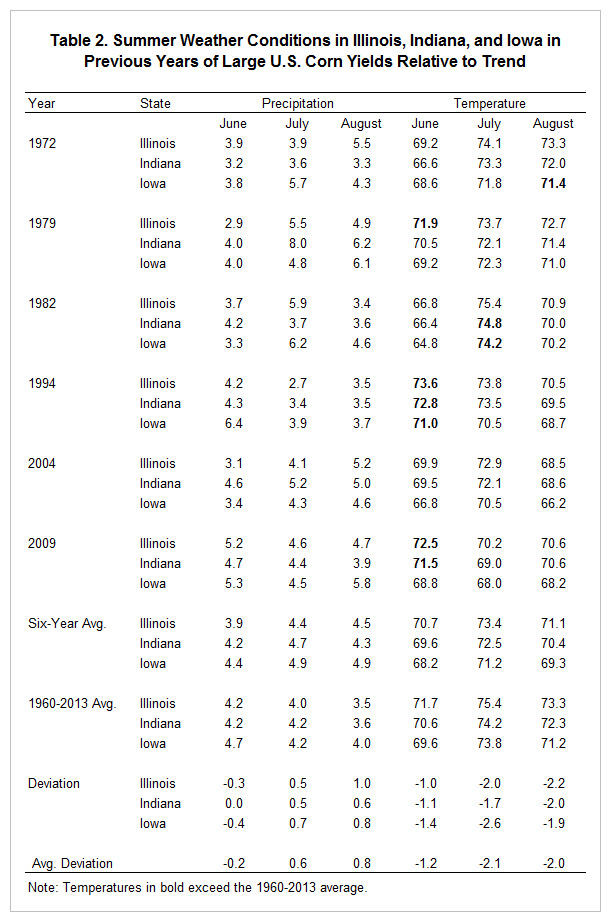 The data in Table 2 paint an interesting picture of growing season weather in these three states in years of high corn yields. First, monthly precipitation amounts were rarely extreme. The highest monthly precipitation was eight inches in Indiana in July 1979 and the lowest amount was 2.7 inches in Illinois in July 1994. Comparing the average precipitation for all three states for the six high-yielding years to the average for the entire 54-year period we find that June was slightly drier than average and July and August were slightly wetter than average.

Temperature observations are even more interesting. In the high-yielding years, average temperatures for some months in some states were above the 1960-2013 average (marked in bold), but those were mostly in June. The 3-month average temperature was below the 1960-2013 average in all six high-yielding years. The coolest summer of the six years for all three states was 2004. The warmest summer was 1979 for Illinois and Iowa and 1994 for Indiana. For the six high-yielding years, temperatures averaged 1.0 degree below the long-term average in June, 2.0 degrees below in July, and 2.2 degrees below in August.

What emerges from this analysis is that very high U.S. corn yields have been associated with summer precipitation that was near to slightly above average and summer temperatures that were well-below average in Illinois, Indiana, and Iowa. It is no mystery that near- to above-average precipitation is critical to high corn yields. One has to look no further than 2012 to appreciate what happens when just the opposite is experienced. More formally, the yield impact of summer precipitation has a marked “hill” shape, with the decline in yields particularly steep for low levels of precipitation (see p. 104 of the previously mentioned research report for examples). The yield impact of cool summer temperatures, particularly in July and August, is probably less widely-understood. Professor R.L. Nielsen of Purdue University explains the relationship as follows,

In other words, cool weather slows down the maturation of the corn plant and thereby provides a longer period for adding dry-matter weight to each kernel of corn.

As a side note, we also examined timeliness of corn planting to see if the six high-yielding years differed from the average timeliness for the period from 1971 through 2013. Three of the six years had about an average percent of the U.S. crop planted “late” (1972, 1982, and 1999), two had considerably less than average planted late (1979 and 2004), and one had considerably more than the average planted late(2009). We conclude that timeliness of planting had a minimal impact on corn yields in these selected years.

Finally, we can compare what we know about the 2014 growing season so far with the growing season in previous high yielding years. Preliminary weather data for June 2014 in Illinois, Indiana, and Iowa are compared to the average June weather in those states in the six previous years of very high corn yields. June precipitation was well above both the 6-year average and the long-term average in all three states. This was particularly notable in Iowa, which received over nine inches of precipitation, about twice its average for the month. The three-state average precipitation in June 2014 was 1.75 times the average in those six high-yielding years. Excessive June precipitation extended beyond Iowa to include Minnesota, Nebraska, and Wisconsin. It is generally acknowledged that June precipitation at the levels received in these states this year may well have reduced yield potential. Average temperatures in June were not excessive, but were above the long-term average and well above the average in the previous six years of very high corn yields. The 2014 growing season did not start off in June with as uniformly optimal conditions as the six growing seasons that produced the highest yields relative to trend yield since 1960. 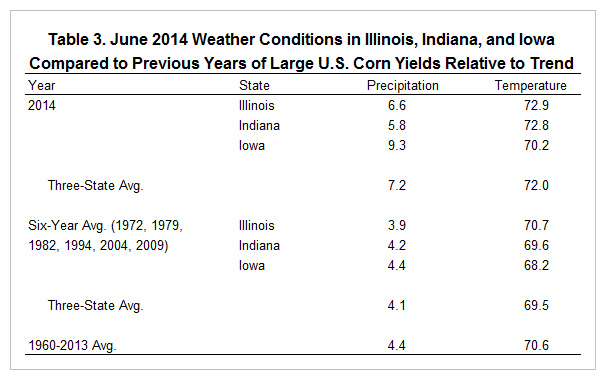 Expectations of a U.S. average corn yield above trend value in 2014 seem justified by current crop condition ratings. A yield above trend by as much as the average (14.1 bushels) of the previous six highest yielding years since 1960 would be 173.6 bushels per acre. However, June weather conditions in Illinois, Indiana, and Iowa were not entirely consistent with those experienced in the previous six highest yielding years relative to trend. This was particularly true for Iowa, which received over twice its long-term average precipitation in June. There is no historical precedent in the last five decades for an extremely high corn yield relative to trend (1972, 1979, 1982, 1985, 1986, 1987, 1994, 2004, and 2009) when Illinois, Indiana, or Iowa had such an extreme amount of precipitation during June. The same conclusion also holds when other major corn-producing states are included in the analysis. This does not mean that such an exception cannot occur, but it would be unprecedented. On the other hand, it should also be pointed out that weather in the first six days of July was very favorable for corn yield prospects. Temperatures in major corn producing states averaged two to seven degrees below normal and precipitation was near average over a widespread area. Near average precipitation and below average temperatures are expected over the next two weeks. Such weather would keep expectations of a very high average corn yield alive. History suggests that cool, moist conditions need to persist through August for the U.S. average yield to be equivalent to that of the other high yielding years examined in this article.

Irwin, S., and D. Good. "Where Should We Be Now With Corn Yield Expectations?" farmdoc daily(2):121, Department of Agricultural and Consumer Economics, University of Illinois at Urbana-Champaign, June 26, 2012.

Zulauf, C. "One Perspective on High Yield for 2014 U.S. Corn and Soybeans." farmdoc daily (4):123, Department of Agricultural and Consumer Economics, University of Illinois at Urbana-Champaign, July 2, 2014.