Incentive issues will be influenced by rental type. For farmland that is not owned, four control methods predominate:

Share rent: A share rental arrangement involves sharing revenue and direct costs. In northern and central Illinois, the most common split is 50% to the farmer and 50% to the landowner, or a 50%-50% agreement. Share rent arrangements are more varied in southern Illinois, with two-thirds (farmer) — one-third (landowner), 60% (farmer) — 40% (landowner), and 50% (farmer) — 50% (landowner) being used. The USDA estimates that share rental arrangements are used on about 18% of the farmland in the Midwest (Bigelow et al.).

Flexible cash rent: A flexible cash rental arrangement is a modification of a cash rental arrangement. The rental payment typically equals a percentage of crop revenue with a minimum or base rent level specified. For example, a fairly typical arrangement in northern and central Illinois is a minimum rent of $200, with a higher rent possible if revenues are high enough for the share to exceed the minimum base level. For corn and soybeans, 33% and 40% revenue shares are fairly typical. USDA estimates that less than 10% of rented farmland in the Midwest uses flexible leasing arrangements (Bigelow et al.).

Custom farming: A custom farming arrangement has the landowner paying all costs and receiving all revenue from a parcel of farmland. In addition, the landowner pays a farmer to perform all field operations. According to Iowa State’s custom operation survey, the usual payment to the farmer for custom operations is about $120 per acre. USDA estimates that one to two percent of farmland in the Midwest is operated using custom farming arrangements.

Prevalence of Leasing Arrangements in Illinois

While the above statistics from USDA provide estimates of averages for the Midwest, Illinois’ land tenure and rental arrangements are unique. Illinois has more of its farmland rented than other states, with 60% of the farmland rented according to the 2017 Census of Agriculture. Grain farms in Illinois Farm Business Farm Management Association (FBFM) tend to be larger than “average” farms and have more of their farmland rented, 80% for FBFM farms compared to 60% for the USDA state average (see farmdoc Daily, July 6, 2021, for more discussion). Given the relatively large share of rented farmland and other factors, the use of leasing arrangement types also likely vary in Illinois from Midwest averages.

Illinois FBFM releases the percent of farmland cash and share rented by its grain farms. In FBFM’s share and cash rent dichotomy, variable cash rents are classified as cash rents.

Figure 1 shows the percent of cash rent acres on rented farmland by FBFM farms. Note that there are regional differences in the use of rental arrangements, with northern Illinois having higher use of cash rent than the other regions. In 2020, cash rental arrangements were used on 77% of rented land in northern Illinois, 53% in central Illinois, and 54% in southern Illinois. As a result, incentive issues will vary across Illinois. Over time, there has been a movement away from share to cash rents. In central Illinois, for example, cash rents were used on 26% of acres in 1995 and now are used on 53%. Almost every year, there is about a one percentage point shift from share rent to cash rent arrangements. As a result, dealing with incentive issues on cash rent farmland is becoming more of a concern. 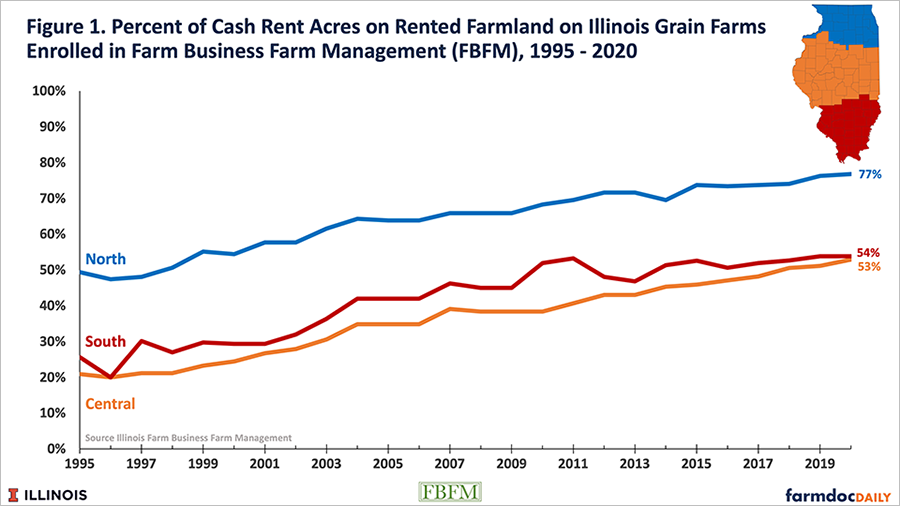 When farmland is owned and operated by the same individual, there is compatibility between the person that bears the costs and receives the benefits, even over multi-year planning horizons. The same is not true under rental arrangements when costs are incurred upfront and benefits occur in the future. There are incentive problems because most leasing arrangements are less than three years in length. In Illinois, a fairly common practice is to have year-to-year leases that can be changed or terminated at the end of each year. While most of these year-to-year leases are renewed, there is no guarantee that the farmer will continue to operate on the rented farmland in the future.

Compatibility issues often arise with lime applications. Lime is typically applied every fourth to fifth year and costs roughly $25 to $30 per acre. Farmers usually pay lime costs in rented situations according to the split in share arrangements. The farmer typically pays 100% of lime’s cost in cash rental arrangements. If a farmer stops farming the land before the end of the life of the lime application, the farmer does not gain all the benefits of the lime. Some leases account for this possibility by having a schedule that pays the farmer for the remaining lime if the lease is terminated. Without such a lease stipulation, some farmers would be reluctant to spread lime.

Similar to lime, compatibility issues arise with adopting conservation practices, with uncertainties and risk further adding to incentive issues. Cover crops are a prime example. In the initial years of planting, the costs of planting and terminating cover crops often are not offset by higher yields or reductions in other costs. Net cover crop costs often are around $25 per acre in the initial years of plantings. In central Illinois, the average return to cash rent farmland from 2016 to 2020 averaged $52 per acre (data from Revenue and Costs for Illinois Crops). A $25 net cover crop cost represents almost half the farmer returns from a cash rent acre. Future economic benefits to the farmer and landowner may accrue from the continued use of cover crops, but those benefits are not well documented. Compared to the lime example where benefits are well known, farmers and landowners may be reluctant to adopt cover crops because of uncertainties of benefits. Tenure and leasing arrangements will further impact adoption decisions.

Owned farmland: If a farmer plants cover crops on owned farmland, the farmer bears the initial costs and accrue all the benefits in the future. In this case, the economic decision is relatively straight-forward when compared to those from leasing situations. Only one party — the farmer, who also is the landowner — needs to be involved in that decision and decide that the prospect of future benefits exceeds the current costs.

Cash rent farmland: Under most cash rent arrangements, the farmer will bear all the costs of the cover crop. Theoretically, all benefits will then accrue to the farmer in the future. However, the farmer likely will be more reluctant to use the cover crop for two reasons:

Given a choice, a farmer is much more likely to plant cover crops on owned farmland, where future benefits are more assured to flow to the farmer. Depending on the cash rent landowner, farmers may be more reluctant on cash rent farmland than on share rent farmland. If the landowner desires higher rent levels, the probability of adopting cover crops declines.

Farmers are more likely to adopt cover crops on owned farmland than on rented farmland because of uncertainties of farming the land when future benefits may accrue. This feature is important as 60% of farmland is rented in Illinois. The majority of rental farmland is controlled by farms over 1,000 acres (see farmdoc Daily, July 6, 2021). For widespread adoption to occur, commercially-sized farms must be targeted, or at least not disadvantaged.

Public policies that encourage cover crops and other conservation adoption practices need to consider rental incentive issues if widespread adoption on rented farmland is desired. Again, the pool of owned farmland is less than 50% of farmland in Illinois and most other Midwest states.

Similar incentive problems could occur with the development of carbon markets. Those agreements likely are long-term, and uncertainties surrounding future control of the land may reduce farmer incentives to adopt on rented farmland.

Schnitkey, G. “Revenue and Costs for Illinois Grain Crops, Actual for 2014 through 2019, Projected for 2020 and 2021.” Department of Agricultural and Consumer Economics, University of Illinois at Urbana-Champaign, January 2021.