Congress debates and reauthorizes farm bills every five years and, and while farm policy is never on the ballot, a candidate’s position on food and agricultural policies certainly can be a factor for voters. More importantly, public opinion has a critical role for representatives as they sort through various policies and proposals. Public opinion can also influence the efforts by interests or lobbying organizations that work on behalf of farmers, consumers and citizens. Finally, the public, as both taxpayers and consumers, are important stakeholders in the farm bill and the policies authorized in it. For these and other reasons, investigating public opinion on agricultural policy is vital. In this article, we explore public perception of various forms of government support for farmers and analyze the results by both political ideology and geographic region. The results discussed here are from Quarter 1 Gardner Food and Agricultural Policy Survey, a quarterly, online survey of approximately 1,000 US consumers (farmdoc daily, June 2, 2022).

In the survey, we asked participants in which situations they thought the government should provide financial support to farmers. They were asked about six situations when farmers might receive government financial assistance: a natural disaster (e.g., hurricane, tornado) harms a farmer’s crop(s); crop prices are considered too low; farmers adopt sustainable production practices; to make crop insurance protection more affordable for farmers; during agricultural trade or export restrictions; and to provide income to farmers. Participants were able to answer Yes, No, or I Don’t Know/No Opinion for each type of possible support. We also asked participants to select in which situation would it be most important for the government to provide financial support to farmers, which is a useful way to understand the public’s priorities.

Across the board, we find that the many US consumers believe the government should provide financial support to farmers in a variety of situations (see Figure 1).

Figure 1. Extent to Which Us Consumers Agree the Government Should Provide Different Types of Financial Support to Farmers 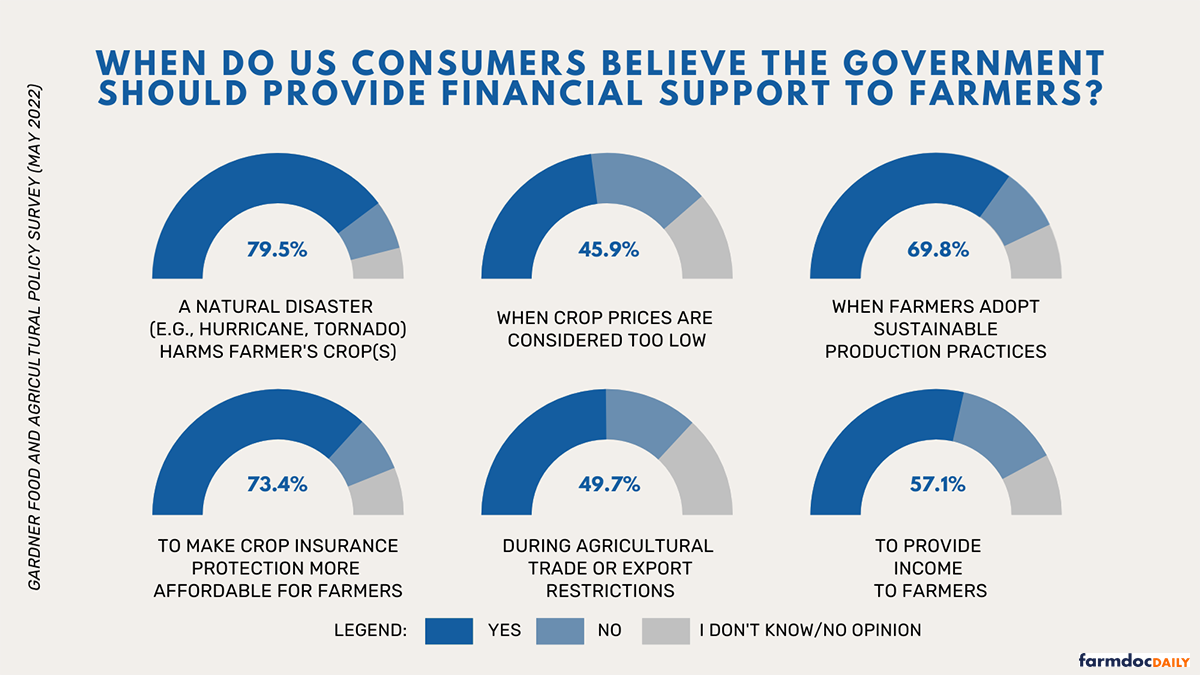 We find that financial support following crop damage from natural disasters received the highest level of agreement, with nearly 80% of consumers saying they believed the government should provide support in this situation. Similarly, 73.4% agreed government support should be used to improve affordability of crop insurance.

Financial support during agricultural trade or export restrictions (49.7%) or when crop prices were considered too low (45.9%), received the lowest levels of support in this survey. However, more consumers indicated they did not know or had no opinion about these two situations than the others (see Figure 1). Combined, these may indicate that these programs were less familiar to the public or that there is little understanding about how these programs work. It could also reflect the attention that recent ad hoc program payments have received, such as the payments from the Market Facilitation Program.

Interestingly, over half (57.13%) supported a more general payment to provide “income to farmers”. Previous research has shown common reasons the public supports government financial support for farmers are to ensure a secure supply of food for US citizens and because they believe farming incomes are too unpredictable (Ellison, Lusk, and Briggeman, 2010), which may explain support of this more general payment. This option also received a higher level of don’t know or no opinion.

Beyond financial support during difficult times, nearly 70% agreed the government should provide financial support when farmers adopt sustainable production practices. This is in line with earlier results from the Gardner Food and Agricultural Policy Survey, where we reported that the public is concerned about climate change’s impact on the food system, including the possibility of causing food shortages and increasing food prices (farmdoc daily, June 10, 2022). However, we also report that the majority (57.1%) of consumers surveyed agree that our food system produces sustainable food (farmdoc daily, June 2, 2022).

When consumers were asked to select the most important situation in which farmers should receive financial support from the government, we find that nearly 40% of those surveyed indicated the top priority should be financial assistance when a natural disaster harms a farmers’ crops (see Table 1). This was followed by a more general income payment for farmers (19.3% of consumers believed this should be the top priority), when farmers adopt sustainable production practices (14.7%), and making crop insurance more affordable (14.0%).

Table 1. Situations When US Consumers Believe It Would Be Most Important That the Government Should Provide Financial Support to Farmers

Across political ideologies, there seems to be relatively high rates of agreement on farm support mechanisms. Figure 2 breaks down the types of government aid for farmers that liberal, moderate, and conservative consumers support. In general, both conservatives and liberals were in favor of support mechanisms at slightly higher rates compared to moderates. An exception to this was financial assistance for farmers who adopt sustainable production practices, which was supported most highly by liberals (81.6%), then moderates (68.7%), and finally conservatives (60.1%). Conservatives had slightly higher rates of support for when natural disasters occur and making crop insurance more affordable. Beyond the adoption of sustainable production practices, liberals had somewhat higher rates of support for payments when crop prices were too low, when trade or export restrictions occurred, and to provide income to farmers. Differences across political ideology may be due to differing beliefs about government involvement in agricultural markets or feelings about taxes (Ellison, Lusk, and Briggeman, 2010; Variyam, Jordan, Epperson, 1990) or about differing worries (e.g., climate change).

Figure 2. Extent to Which Us Consumers Agree the Government Should Provide Different Types of Financial Support to Farmers by Political Ideology 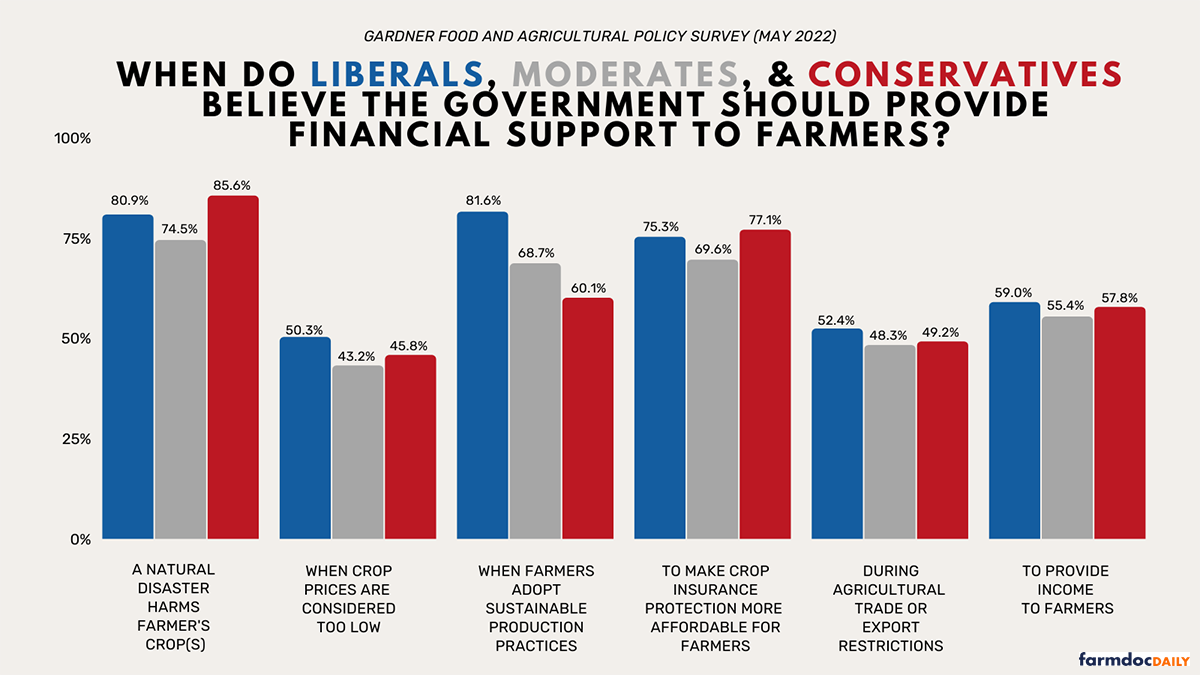 Support also varies somewhat by geographic region. Results are presented in Table 2, where regions are defined by census regions (Northeast, South, Midwest, and West). In particular, we see that payments to farmers who adopt sustainable production practices had higher rates of support from participants in the West and Northeast (76.9% and 72.1%, respectively) than those in the Midwest and South (67.9% and 66.8%, respectively), which aligns with our previous findings that these regions are more concerned about climate change (farmdoc daily, June 10, 2022). Support for providing farmers a more general income payment was supported at higher rates in the Northeast (61.5%) and South (58.7%) than in the West (53.8%) or Midwest (52.5%).

Table 2. Extent to Which US Consumers Agree the Government Should Provide Different Types of Financial Support to Farmers by Geographic Region

The public, as both taxpayers and consumers, are an important part of the food system, and understanding public perception of agricultural policy is essential. Informing that understanding has important implications for the upcoming farm bill debate. Results from the Gardner Food and Agricultural Policy Survey show that the public generally supports a wide variety of policies that assist farmers, but that assistance following natural disasters has the strongest level of support. We also find that support for different programs varied across political ideology and geographic region.