The current supply and demand situation suggests a need for more corn acres in the upcoming 2011 production year. If corn acres are to increase, a sizable amount of the growth likely will come from the corn-belt. In the corn-belt, increases in corn acres cause reductions in soybean acres, as these two crops compete for acres. As farmers decide the proportion of corn and soybeans to plant, relative profitability of corn and soybeans likely enter into the decision-making process. 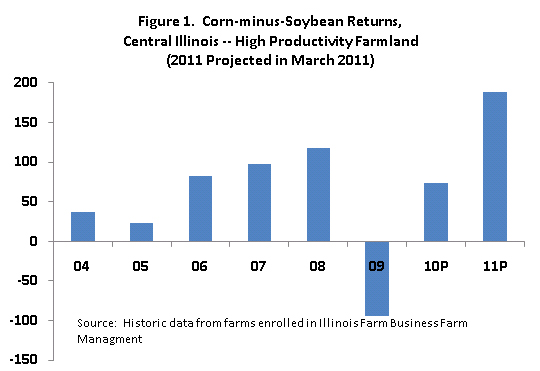 Corn being projected more profitable than soybeans is widespread over much of the corn-belt. Relative profitability of the two crops is examined with break-even soybean-to-corn ratios for each county in the corn-belt. Calculations begin with the following formula:

where the breakeven corn price gives the price at which corn and soybeans have the same profits and the “cost difference” is the additional cost of producing corn rather than soybeans (see the Sept 17 Illinois Farm Economics: Facts and Opinions article titled “Breakeven Corn Prices for More Corn in 2007” for more detail). This equation serves as the basis for determining breakeven soybean-corn price ratios. The above equation is rearranged to calculate ratios for each county in the greater corn-belt using expected yields for each county.

In each county, historical corn and soybean yields from the National Agricultural Statistical Service, an agency of the U.S. Department of Agriculture are used to calculate trend-yields. For those counties where non-irrigated and irrigated data exists, non-irrigated yields are used. Counties that do not have sufficiently long yield series are not included in the analysis. Trend yields equal the linear trend through the 1972 through 2009 data extended to 2011.

The cost difference is set at $210 per acre, based on budgets for central Illinois. This indicates that corn production costs are $210 per acre higher than soybean production. 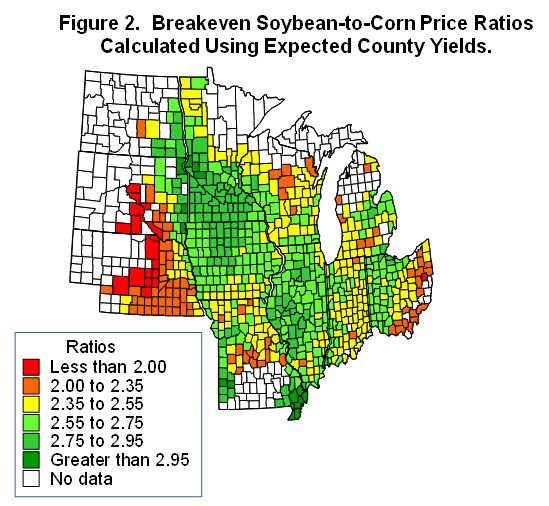 A map of break-even soybean-to-corn ratios is shown in Figure 2. When examining these ratios, two benchmarks are useful. Current cash bids place the soybean-to-corn ratio at 2.26 ($13.25 for soybean divided by $5.85 for corn). Counties with ratios less than 2.30, picked to be more conservative than the 2.26 current price ratio, are colored either red or orange. Counties in red have break-even soybean-to-corn price ratios below 2.00 while orange counties have ratios between 2.00 and 2.35. On average, farms in these counties will find soybeans more profitable than corn.

The second benchmark is 2.55. This is the average price ratio for January 2007 through December 2010 using monthly Illinois prices as reported by the US Department of Agriculture. In Figure 2, counties in red, orange, and yellow have breakeven ratios below 2.55. In yellow counties, soybeans would be more profitable than corn given historic soybean-to-corn price ratios, but this year’s current harvest-time bids suggest corn will be more profitable than soybeans in these counties.

Over much of the corn-belt corn is projected more profitable than soybeans. Moreover, differences in corn returns are projected to be more than historically observed. Whether farmers will react to profit incentives remains to be seen. Overall there may be caution to switching to more corn because growing and harvest conditions in the past two years have been problematic in many areas of the corn-belt.

Returns presented in this paper are averages. Individual farms can vary significantly from these averages. Hence, farm specific budgets should be consulted when evaluating acreage decisions.