The USDA projects that soybean stocks at the end of the current marketing year will total only 140 million bushels, or about 4.2% of projected consumption. With expectations for such small inventories, soybean prices have been and will continue to be sensitive to the pace of consumption. The USDA provides weekly soybean export and export sales data. For the domestic crush, however, monthly data are provided by the Census Bureau, typically in the fourth week of the following month. Estimates for February were released today. 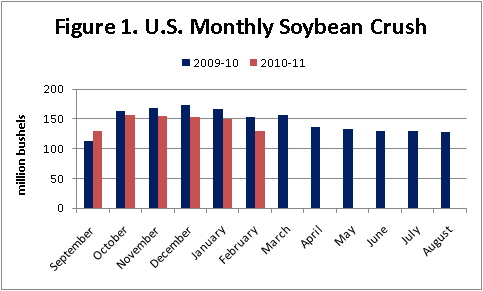 For the year, the USDA projects the domestic crush at 1.655 billion bushels, 97 million bushels (5.5 percent) smaller than last year’s crush. The magnitude of the crush is driven by soybean meal demand since meal is not storable and soybean oil is easily stored. From September 2010 through January 2011, domestic soybean meal consumption exceeded that of a year ago by nearly 3 percent, but exports were down by about 18 percent. Total consumption was off by 3 percent. Today’s report revealed that total meal consumption in February was nearly 13 percent less than that of a year earlier. In addition, the average yield of soybean meal per bushel of soybeans crushed so far this year was 1.6 percent higher than in the previous year. As a result, the monthly soybean crush has been below that of the previous year since October 2010 (figure 1). The crush during the first 6 months of the marketing year was 65 million bushels (6.9 percent) smaller than during the previous year. The crush during February, as reported today, was down almost 16 percent. To reach the USDA projection, the crush during the last half of the year needs to be only 32 million bushels (3.9 percent) smaller than that of a year ago. The March domestic crush report will be released on April 28. 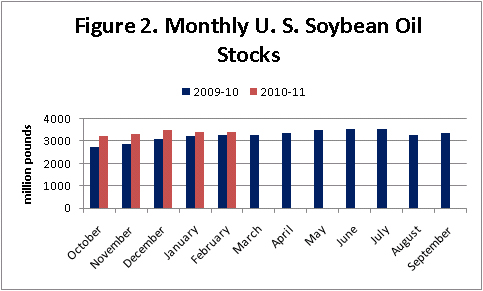 Even though the domestic crush has been smaller this year, month-end stocks of soybean oil have been larger (figure 2). The yield of soybean oil per bushel of soybeans crushed has been nearly 2 percent higher than the yield of a year earlier. While soybean oil exports were up 16 percent in the period September 2010 through January 2011, the domestic use of soybean oil for production of biodiesel was down by 58 percent. Consumption began to recover in January 2011 when the blenders’ tax credit was re-instated. Estimates of use during February will be released on March 31. Consumption of U.S. soybean oil for all purposes was off about 3 percent from September 2010 through January 2011, but was down nearly 7 percent in February.