Our post on March 29 provided updated evidence that nominal crop prices entered a new era beginning about January 2007. The increases in price levels that have occurred in this new era are generally consistent with the increases that occurred in the previous era that extended from January 1973 through September 2006. We have not previously examined livestock prices to determine if a shift in those prices has also occurred recently. Here we examine the average monthly farm prices of hogs; steers and heifers; and milk in Illinois in the accompanying three figures to identify the timing and magnitude of any previous or recent shift in nominal price levels.

For hogs, the price data covers the period from January 1947 through February 2011 (U.S. average prices have been substituted for Illinois average prices for both hogs and steers and heifers in January and February 2011 since USDA discontinued reporting state level average prices). A clear increase in nominal hog prices occurred in early 1973, similar to the timing of the increase in crop prices. The average price of hogs from January 1973 through September 2006 was 2.33 times the average during the previous era. The magnitude of the increase was almost identical to that experienced for soybeans. A more recent shift in nominal prices is not yet clearly evident. While prices are currently moving to new highs, the average price since December2006 was only about 10 percent higher than in the previous period ending in September 2006.

Average monthly milk prices are also available starting in January 1960. The nominal price pattern for milk is distinctly different than the pattern for the other commodities examined. Prices increased steadily through December 1981 and then moved generally sideways through December 2000. Prices have averaged slightly higher since 2000, but a clear shift in the level of prices is not yet evident.

We have examined prices in nominal terms because those prices are important to current decision makers. We will examine prices in real terms, as well as livestock profitability indicators, in upcoming posts. 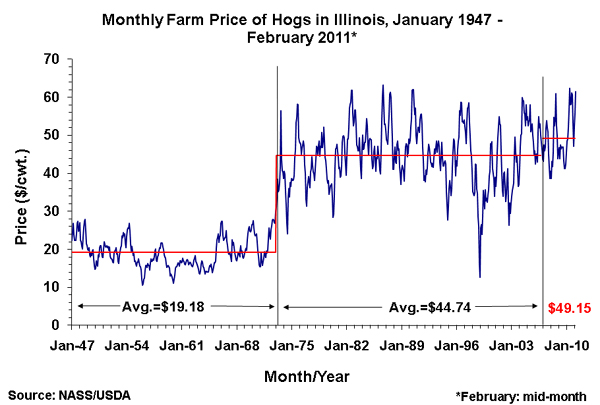 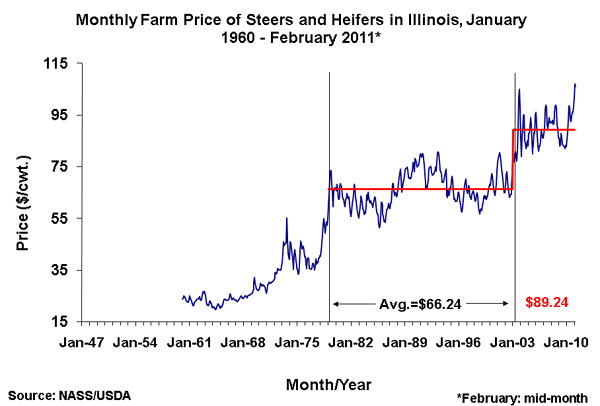 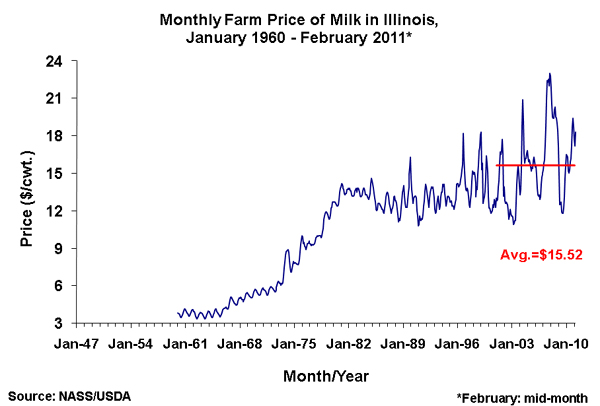