The projection of the marketing year domestic crush of soybeans was unchanged at 1.65 billion bushels, 102 million (5.8 percent) less than the crush during the previous year. For the past two months, we have chronicled the pace of the domestic crush as estimated by the Census Bureau. The April 2011 crush estimate was released today and revealed a continuation of a very slow pace of crush (figure 1). [Note: The Census Bureau estimates for April are reported as released. Revision in some estimates may be required since calculations of combined meal and oil production per bushel of soybeans crushed during the month exceeded 60 pounds.] The April crush was estimated at 128 million bushels, 7.1 million bushels (5.2 percent) fewer than crushed in April 2010 and the smallest crush for the month since 2004. The monthly crush has been below 128 million bushels only 3 times since September 2004. Those low totals occurred in either August or September. Cumulative crush for the marketing year to date (September 2010-April 2011) totaled 1.143 billion bushels, 89 million (7.2 percent) below the total of the previous year. 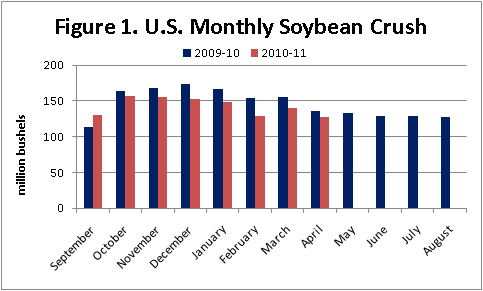 The slow pace of the domestic crush so far this year reflects a combination of higher product yield per bushel of soybeans crushed and (mostly) a slowdown in soybean meal consumption. Soybean meal consumption during the period September 2010 through April 2011 was 6.4 percent less than during the same period in the previous year. The largest decline, 22 percent, was in the export market, as a rebound in South American soybean production has provided more competition for U. S soybean meal. Consumption of U.S. soybean oil during the same period was about two percent below that of the previous year. Month-end soybean oil stocks remain large even as the soybean crush and resulting soybean oil production have declined. Stocks at the end of April were marginally smaller than stocks of a year earlier (figure 2). Stock levels below those of a year ago may continue through the end of the marketing year since stocks were very large, at least through July, last year. The USDA projects year-ending stocks to be 885 million pounds (26 percent) smaller than stocks at the beginning of the year. 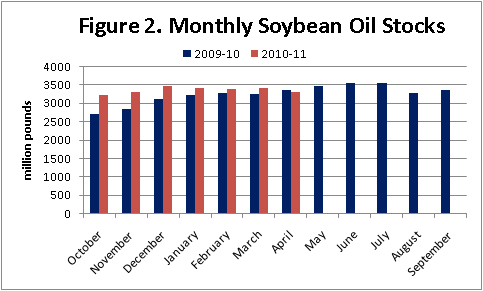 To reach the USDA crush projection for the year, crush during the final four months of the marketing year needs to total 507 million bushels, only 13 million less than during the same period last year. Crush during those four months last year was relatively small so that the projection for this year may still be achievable. A monthly rate of about 127 million bushels will be required.