With farmland values increasing at rapid rates over the past 5 years, there has been growing concern over whether we are facing a farm real estate bubble. The bubble view links current Fed policy and the resulting low interest rates to the increase in farmland investment activity, noting the similarities between today’s interest rate and commodity price environment and that of the period leading up to the 1980s farm crisis. Arguments against the bubble view cite the current income generating ability of farmland, the hedge against inflation it provides as a real asset, and the reportedly lower debt loads currently held by farmers as compared to the period leading into the crisis of the 80s.

But are farm debt levels really low? In relative terms, as measured by leverage, the answer is yes. Figure 1 illustrates the decline in the average debt-to-asset ratio for U.S. grain farms reported by the USDA Agricultural and Resource Management Survey data. Grain farmers financed roughly 10% of their assets with debt in 2009, a significant decline from the average level of more than 16% in 1996. Over the same time period, average land values in most grain producing regions have more than doubled. For example, IL land values increased from less than $2,000 per acre to more than $4,800 per acre according to USDA data. Continued increases in land values have persisted in 2010 and 2011. Given that farmland comprises a significant portion of the asset portion of the farm balance sheet, this increase in land values would naturally act to reduce farm leverage or relative debt position even with increasing nominal debt levels. Furthermore, if a farm real estate bubble does exist, measures of leverage based on current market values may be significantly understated. 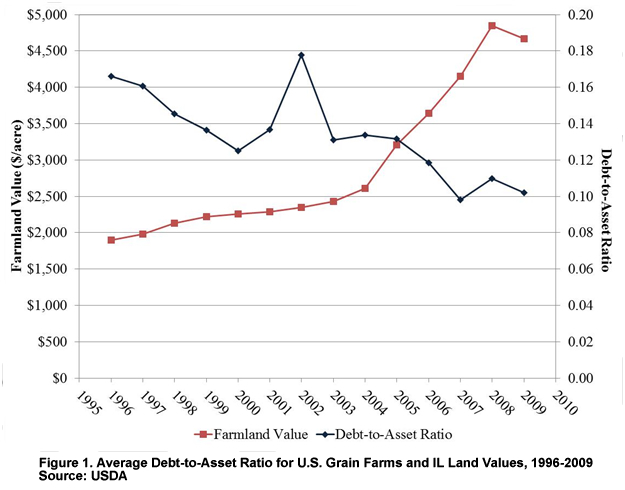 Figure 2 uses data from the Illinois Farm Business Farm Management Association (FBFM) to illustrate the change in debt levels since 1996 for commercial grain farms in Illinois. Debt levels have indeed increased in both real and nominal terms. Total debt has increased by 44% since 1996, with a similar increase in the current portion of debt. This equates to an average annual increase of nearly 3%. Long term debt has increased at an even faster rate due mainly to increasing land values, and is almost 60% higher than its level in 1996 (3.5% average annual increase). Intermediate debt has also grown, but at a slower rate of approximately 1.5% annually, and is 25% greater than in 1996. 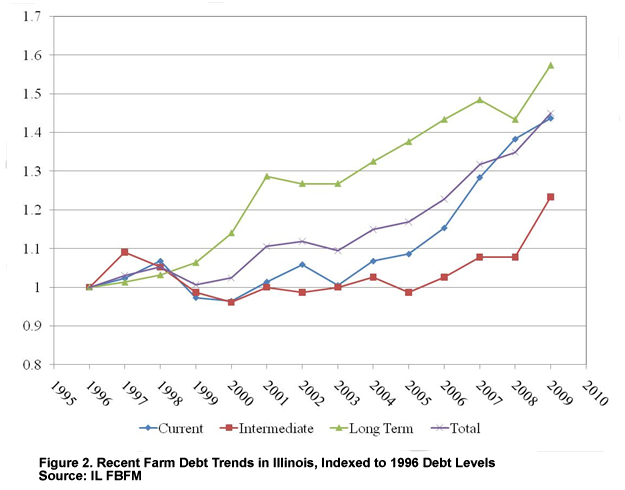 Another important measure to consider is that of farms’ debt repayment capacity, or their ability to generate sufficient income to service existing debt levels. In a recent article from the Kansas City Fed, Brian Briggeman analyzes current farm debt levels and estimates the impact of income and interest rate stresses on farms’ debt repayment capacities. He shows that farm debt has indeed been increasing rapidly since 2004 throughout the U.S., with this increase concentrated among younger farmers, crop producers, and larger farms with sales exceeding $1 million. While the financial stress scenarios examined in the article would negatively impact all debt-holding farms, interest rate or farm income shocks were estimated to have the most severe impact on livestock producers due to relatively low income levels compared to crop producers.

In summary, there are opinions on both sides of the current farm real estate bubble. Many argue the potential impact of a decline in farmland values would be smaller than during the 1980s farm crisis due to low farm debt levels. While debt has fallen in relative terms, it has been increasing fairly rapidly in absolute terms. This is especially true for term debt and among certain farm groups. Recent analysis indicates that interest rate or farm income shocks could still lead to significant financial stress for grain and livestock farms.