The USDA’s weekly Crop Progress report released on June 13th indicated that corn planting progress had caught up to the normal level of 99 percent by June 12. Some caution is warranted in interpreting the planting progress numbers. First, planting progress always catches up to the average pace since planting is eventually completed. Planting progress this year caught up to the average pace very late in the season, underscoring the fact that a much larger than average percent of the crop was planted after the optimum date for maximizing yield potential. Yield potential is reduced in a non-linear fashion with lateness of planting, with yield penalties increasing for later planting dates. Figure 1 depicts that relationship for Illinois based on estimates from research here at the University of Illinois by Emerson Nafziger. Yield penalties become very large for corn planted after mid-May. The yield penalty for corn planted in early June, around 25%, is especially striking.

The yield/planting date relationship is summarized in Table 1, along with weekly U.S. corn planting progress for 2011 and the average weekly planting progress for 2006 through 2010. We use the planting response results for Illinois shown in Figure 1 as representative of the bulk of U.S. production. The data in Table 1 imply that an average of 25 percent of the crop was planted after May 15th in 2006 through 2010. In 2011, 37 percent of the crop was planted after May 15th. That is, nearly 50 percent more of the crop than normal was planted during the period with substantial and increasing yield penalties. While corn yields can still be “good” in 2011 if summer weather conditions are favorable, the U.S. average yield should be expected to be below potential yield due to the lateness of planting of such a large portion of the crop. 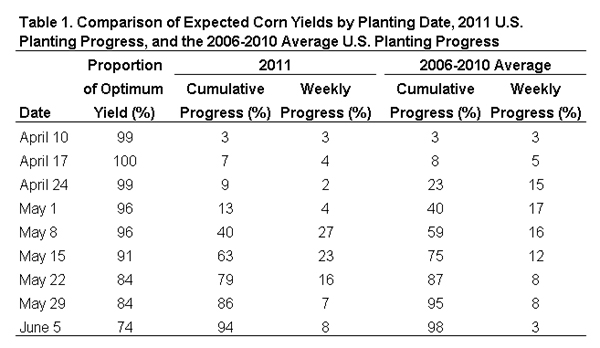 The second point about planting progress is that planting always reaches 100 percent, but the question is 100 percent of how many acres? Early planting progress reports reflect the percentage of acreage intended for planting. Intended acreage may change later in the planting season as cropping plans are altered by weather and timeliness of planting. That is, the denominator in the calculation of planting progress may change as the season progresses. This year, corn acreage is expected to be less than intentions reported in March, so that 100 percent planting progress represents fewer acres than if all intended acreage had been planted. The National Agricultural Statistics Service (NASS) provides the following guidance to those completing the weekly Weather and Crops questionnaire: “Percent of acreage planted relates to the amount that would be planted under normal conditions. For instance, on wheat seeding you may be reporting less than 100% seeded when lateness or weather prohibits further seeding. Your reported seeding should then jump to 100% the next week although no additional wheat was seeded.” For the week ended June 12th, a reported 39 percent of the Ohio corn crop was planted, bringing total progress to 97 percent. The reported figure was likely 97 percent of a much smaller acreage than the 3.7 million intended acres reported in March.

The USDA’s Acreage report to be released on June 30 will provide a survey-based forecast of acres planted to corn and intended acreage to be harvested for grain. The USDA’s June WASDE report reflected expectations that planted acreage will be 1.5 million less than intentions reported in March.