In order to provide further insight on temperature impacts, we examine state-average corn yields for Illinois over 1975 through 2010 in years when the average July temperature exceeded 77 degrees or about 2 degrees above the average temperature for the state over the entire time period. We chose this temperature cutoff because preliminary data indicates July 2011 will be at least this warm. Summer weather and trend-adjusted yield data for those 10 years are presented in Table 1. Note that the observations are ordered by average July temperatures (largest to smallest). A linear regression trend estimate over 1975-2010 is used to re-state all yields in terms of 2011 technology. For example, the actual Illinois yield in 2002, 135 bushels per acre, is increased to 152 bushels to reflect the improvement in corn production technology since 2002. 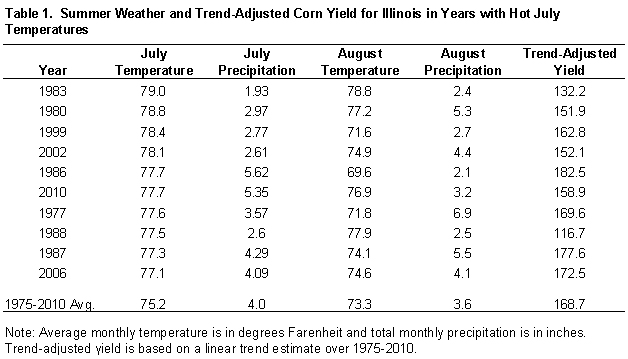 The state average trend-adjusted corn yield in the selected 10 years varied from 116.7 to 182.5 bushels and averaged 157.8 bushels, compared to the 36-year average of 168.7 bushels. Consistent with previous research, a substantial part of the variation is associated with the large range in July precipitation and varying temperature and precipitation conditions in August. In addition, extremely dry conditions were experienced prior to July in 1988. The available data indicates average July temperature in 2011 will be above 77 degrees and that the average precipitation will be below the 1975-2010 average of 4 inches. 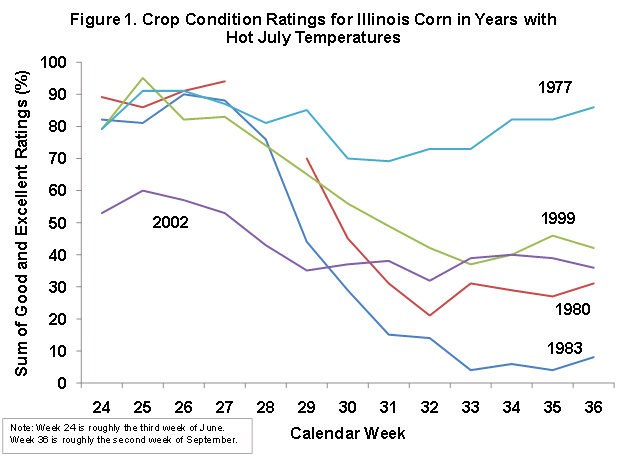 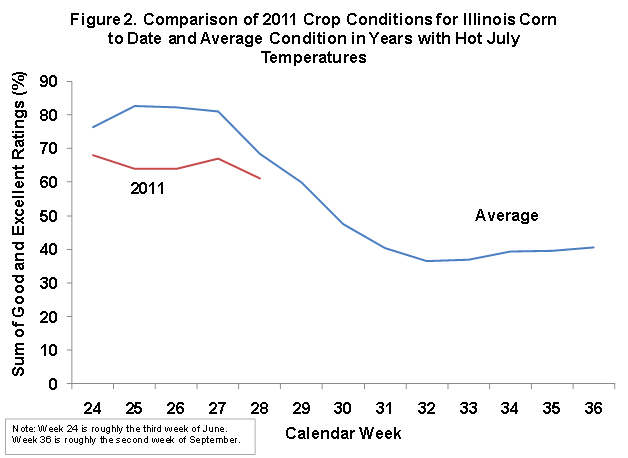 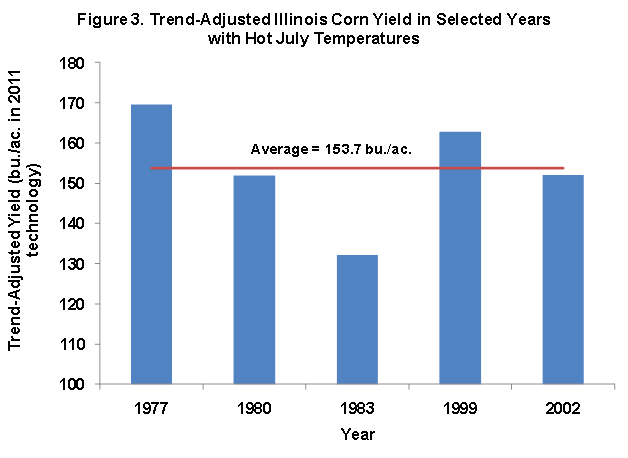 Corn yield prospects in Illinois this year are still very uncertain. However, the history of corn yields in years with hot, dry conditions in July clearly points to the potential for a below average yield. Much will depend on actual weather conditions in the last week of July and in August. Weekly crop condition ratings will provide some indication of potential yield. Without favorable conditions during that period, a state average corn yield in the mid- to low-150’s might be expected. That compares to a trend yield for 2011 of 168.7 bushels.

Some other Corn Belt states have experienced hot, dry conditions in July. We have not done a similar analysis for these states, but comparable results would be expected. The implications for the U.S. average corn yield are less certain because parts of the Corn Belt have fared better than Illinois this summer.