In the post from July 15, a regional comparison of a proposed modification to the existing ACRE program was summarized. One of the main points of the analysis was that an area revenue program based on a lower level of aggregation (i.e. county-level vs. state-level) would result in fairly significant gains in support and risk reduction for Midwestern states relative to Southern states. Support currently offered under the direct payment program – the most commonly cited area for anticipated cuts to farm program spending – is also characterized by regional variation.

Direct payments are made on a farm unit’s base acreage. These base acres are fixed values based on historical crop acreage rather than current planting decisions. This allows producers to adjust planting decisions for program crops to changes in expected crop returns without affecting the amount of direct payment support associated with a given farm unit.

Figure 1 compares the level of base acreage to average planted acres from 2007 to 2011 for certain program crops in the U.S. using data from the Farm Service Agency. Corn, soybeans, and wheat are the dominant program crops, accounting for approximately 80% of total base acreage. Planted acres for corn and soybeans currently exceed base acreage by 4 million and 23 million acres for these crops, respectively. In contrast, recent planted acreage for crops such as barley, sorghum, cotton, and wheat have been well below their base acreage amounts. These differences are due primarily to reduced small grain acreage in the Plains and Midwest, and reduced cotton and rice acreage in the South as corn and soybean acreage has expanded since the last base update in 2002. 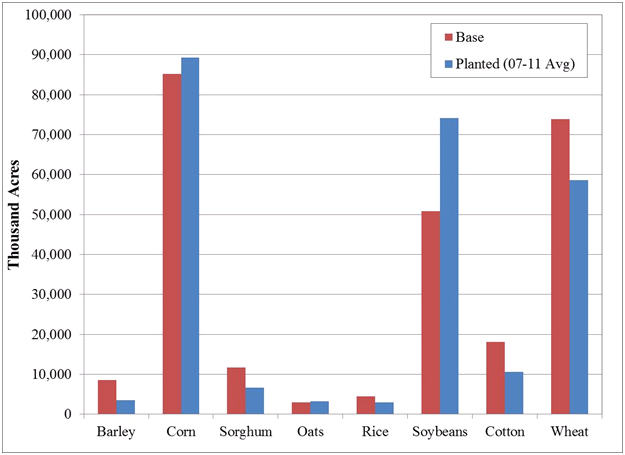 This variation in base acreage and resulting direct program support can also help explain the differences in opinion of the ACRE program between Midwestern and Southern crop producers. While a Midwestern corn farmer may have to give up around $5 per base acre to enroll a farm in ACRE, a Southern corn farmer may be required to forego as much as $8 per cotton base acre or close to $20 per rice base acre to enroll. These differences in the relative cost of enrollment are reflected in the actual enrollment numbers by state for the ACRE program in 2009 and 2010. In Midwestern states, enrollment rates range from 10% of base acres in Ohio to 23% in Illinois. Enrollment rates in the Southern states were much lower, with less than 1% of base acres enrolled in states such as Arkansas, Louisiana, and Mississippi.

In summary, agreement regarding farm program modifications, even among producers with similar crop mixes, will be difficult to achieve due to regional factors such as variation in the historical acreage allocation from which farm program base acres are derived. Producers in the Midwest may be more willing to consider reductions in direct payment support to fund changes or improvements to existing programs such as ACRE or crop insurance. However, strong support for direct payments exists among Southern producers whose historical base includes cotton and rice acreage associated with much larger direct payments. This is true despite trends in both regions away from small grains, cotton and rice acreage toward corn and soybean production.