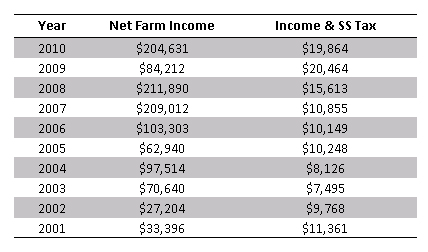 It would seem that to add over $100,000 in net farm income while adding just under $6,000 in income and social security taxes doesn’t quite add up! We know that tax rates…even at their lowest…are not at the 6% level. What gives?

First of all, I will acknowledge that net farm incomes are accrual based and the taxes paid are based on Schedule F cash income. But, over time those differences should begin to wash out; it could be that ten years isn’t quite long enough.

Or, there could be a number of other reasons for these facts that seem at odds with each other.

This makes me think that there might be a ‘mountain’ of deferred income tax that has been built up. It would do one well to realize that this is something to be aware of. Maximizing after tax income year-after-year is the goal of many. Good financial management includes good tax management. In the current political lingo…this could be referred to ‘kicking the can (or the tax liability) down the road’. But, in many cases it is employing good financial and tax management to with the goal of maximizing after tax income.