In the Tuesday September 13th post, information about average cash rent trends in Illinois was provided for use in negotiating rent levels for 2012. As cash rent levels continue to rise, producers might be interested in considering variable cash leases as an alternative form of rental arrangement for risk management purposes. Landowners may also be interesting in a variable lease which could offer larger rental payments and greater returns during years resulting in high crop revenues. 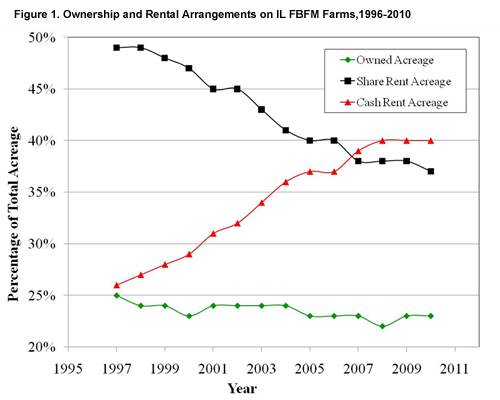 A number of factors have contributed to this trend, such as the simplicity of cash rent contracts from both producer and landowner perspectives. Management decisions do not have to be negotiated under a cash rental agreement, and they also relieve the landowner from making marketing decisions while providing them with a fixed return. Furthermore, under cash rent contracts the producer handles all processes related to government program payments. However, this shift towards cash rent contracts has also increased the risk exposure facing the tenant which becomes increasingly important as production and land costs continue to rise.

Based on recent survey results from the Illinois Society of Professional Farm Managers and Rural Appraisers (ISPFMRA), variable cash leases are becoming more widely used. Variable cash leases were reportedly used on 21 percent of rented acres in 2011, an increase from 11 percent in 2010 and 2009. All respondents in their survey indicated expectations for the use of variable cash leases to either increase or remain stable in 2012. While their use is on the rise, the 2011 ISPFMRA report on land values and leasing trends indicates that the use of flexible leases varies widely by region within Illinois. Rented acreage in variable leases ranges from just 2 percent in regions of northern Illinois to up to 75 percent in regions of southern Illinois.

Variable cash leases offer an alternative with many of the benefits of both cash and share rental agreements. The most common variable lease design includes a minimum fixed cash rent set at a level below what would be appropriate for a fixed cash rent agreement, along with a bonus tied to gross revenues. This provides the landowner a minimum return along with the potential for higher returns under profitable conditions, while the producer receives some risk sharing benefits through the lower minimum established in the agreement. Furthermore, a recent Farm Service Agency policy change states that variable cash leases are treated as fixed cash agreements with respect to collecting government program payments at least through the 2012 crop year. Thus, landowners who agree to a variable lease are not required to enroll in the Direct and Counter-Cyclical or ACRE programs.

Tenants who are currently operating under a cash rent agreement might approach variable cash lease negotiations by offering a minimum or base rent level below their current cash rent amount, and then specifying a revenue share which would result in a slightly higher expected rent level for the landowner to compensate them for the risk sharing the variable lease provides. This is illustrated in figure 2 where a $250 cash rent contract is compared to a variable cash lease with a $150 base rent and 25 percent of revenues exceeding $500 per acre. At a revenue level of $900 per acre the contracts result in the same rental rate. As revenues increase the landowner receives a larger payment under the variable lease, while for lower revenues the rental rate under the variable design is lower, providing the producer some risk protection.