Much has been written in recent years about the linkages between the agricultural and energy markets. Energy prices have always had an impact on agricultural prices indirectly through their effect on input costs. What’s new is their direct impact on output prices forged via biofuel production. In particular, corn prices are now inextricably linked with crude oil and gasoline prices. With that background in mind, this is the first of a series of posts that will explore basic pricing relationships in the energy markets and between energy and agricultural markets.

It is no surprise that crude oil prices are the major driver of transportation fuel prices. Figure 1 shows one benchmark for the price of crude oil in the U.S.—the nearby price of NYMEX crude oil futures prices on a weekly (Thursday) basis since early 2007. The roller coaster ride of the last five years is obvious, with crude rising to over $145 per barrel in the summer of 2008, dropping precipitously to under $40 during the financial meltdown during the fall of 2008, and then beginning a steady rise back to a peak over $110 this spring. Prices have recently fallen rather sharply again to around $80. 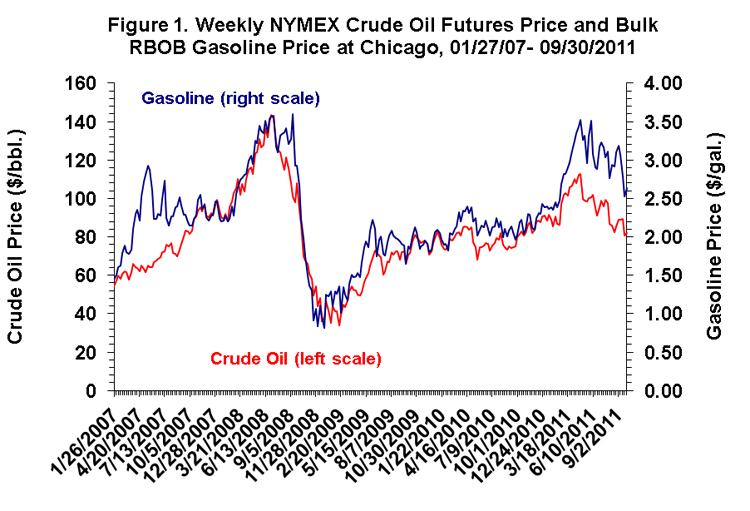 The second line charted in Figure 1 is the weekly (Thursday) wholesale price of gasoline (RBOB) for Chicago. Since one of the major products of refining crude oil is gasoline, it is no surprise that crude and gasoline prices tend to follow one another closely. However, the relationship is far from perfect, which is evident in divergences during early 2007 and in recent months. A simple way to track the relationship is shown in Figure 2. It presents the ratio of crude oil to gasoline prices. The average ratio is about 36 for this period, meaning it usually takes about 36 gallons of gasoline to purchase one barrel of crude oil. This relationship is quite volatile, though, with a low of about 25 and a high of about 55. The sources of the variation are complex but basically have to do with changing refining margins and supply and demand conditions in the crude market versus the retail gasoline market. Notice that the ratio has recently trended down to around 30, likely reflecting a relative surplus of the type of crude represented by the NYMEX futures contract (west Texas intermediate, or WTI) and some recovery in miles driven in the U.S. 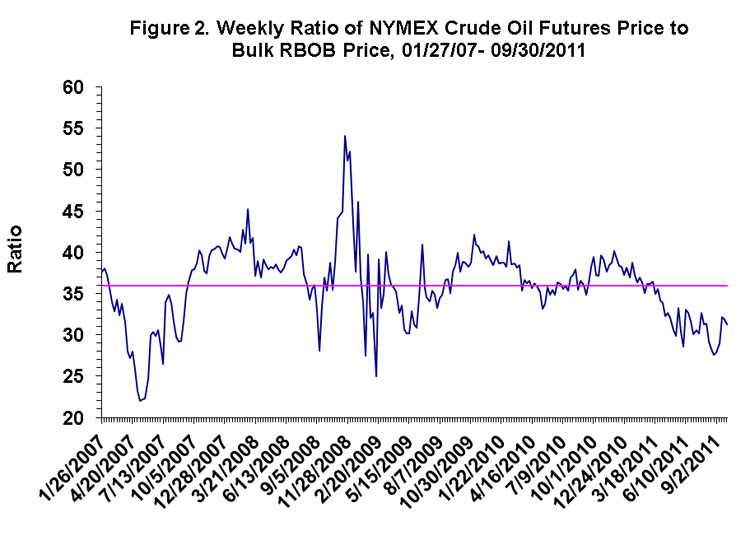 Figure 3 presents the next link in the chain—the difference between wholesale Chicago and U.S. average retail (at the pump) gasoline prices. This difference reflects transportation costs, markup, and taxes. It has averaged about 70 cents per gallon but with a great deal of variation over time. The difference has been very high recently, likely reflecting the ability of retailers to reduce pump prices more slowly than the fall in crude oil prices. History suggests this will not last and margins will fairly quickly return to levels closer to the average. 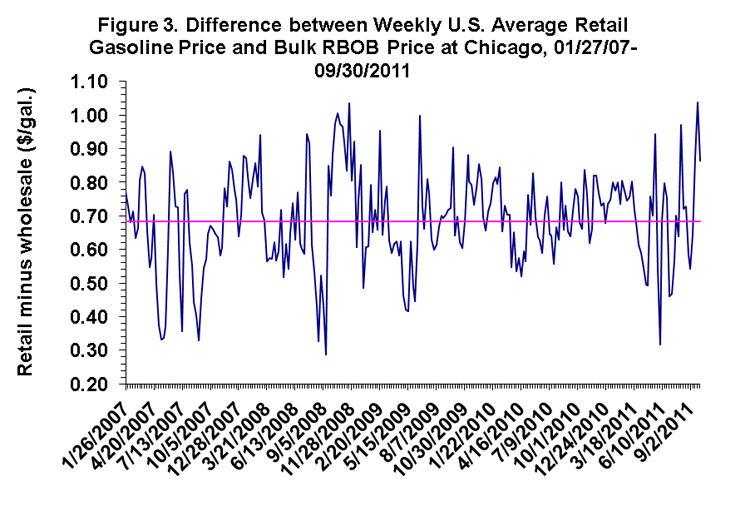