A period beginning in 2006 and ending sometime in the future likely will be viewed as a “golden age” for crop farm incomes. Beginning in 2006, corn and soybean prices have reached higher levels due to increased use of corn in producing ethanol and sustained export demands for grain. Higher commodity prices then have led to higher net farm incomes for grain farms. For grain farms enrolled in Illinois Farm Business Farm Management (FBFM), net farm income has an average of $66,000 per farm from 2001 through 2006 increasing to $177,000 per farm from 2006 through 2010.

Net farm incomes on grain farms likely will average over $200,000 in 2011 because of high corn and soybean prices. Current WASDE estimates place the average price during the 2011/12 market year between $6.20 and $7.20 per bushel for corn and between $11.60 and $13.60 per bushel for soybeans. While average incomes will be over $200,000, incomes will vary across farms because of yield differences across farms. Many farms have had yields significantly below average, particularly in the central and western Illinois. As a result, many farms in central and western Illinois will have lower incomes while farms in northern Illinois will have higher incomes.

Overall, a $150,000 of average net farm income for 2012 will result in another good income year for crop farmers. Further declines in prices could lead to less profitable times and more financial stress. Take, for instance, a $4.50 per bushel corn price and a $10.50 per bushel soybean price. These prices represent estimates of “long-run” prices. There will be variability around these long-run prices over the next five years, but the average over the five-years likely will be close to $4.50 per bushel for corn and $10.50 per bushel for soybeans. These prices would result in $86,000 of net income for grain farms, much closer to the $66,000 average per farm income from 2001 to 2006 than the $177,000 average from 2006 to 2010.

All grain farms need to consider ways of withstanding period where crop prices are significantly below the long-run averages of $4.50 for corn and $10.50 for soybeans. Understanding how to responds to a $3.50 corn price and $8.50 soybean price will be a worthwhile planning activity. Farms particularly vulnerable to price downturns are farms that have a percent of their farm base cash rented. Building financial reserves is a practically now is a particularly good way of being able to withstand periods of low incomes. Farms also need to find ways of lowering cash rents when periods of low prices are on the horizon. 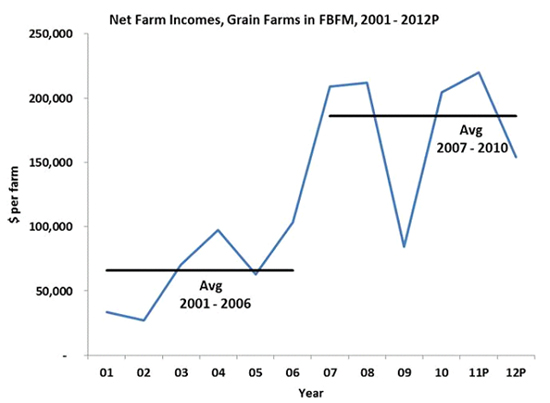 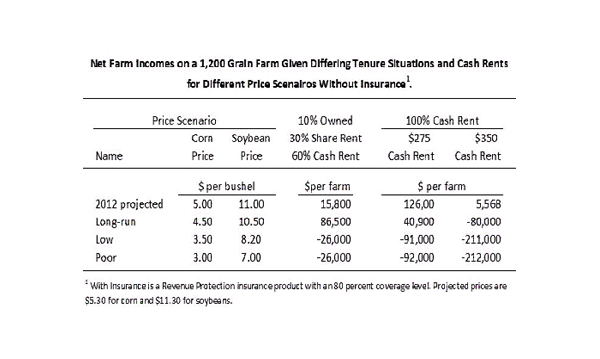