Conditions that have allowed early field work and some very early planting of corn in the Corn Belt have raised the issue of potential impact on the 2012 U.S. average corn yield if the crop is generally planted earlier than normal. That question is addressed here by first briefly summarizing some of the research that has been conducted on the impact of planting date on corn yields. That summary draws heavily on the work of Emerson Nafziger, Department of Crop Sciences at the University of Illinois (2008 and 2012), but similar results have been reported in other Corn Belt states (see the summaries found here). Figure 1 illustrates the general yield response to planting date in central Illinois, which is thought to be representative of much of the Corn Belt. 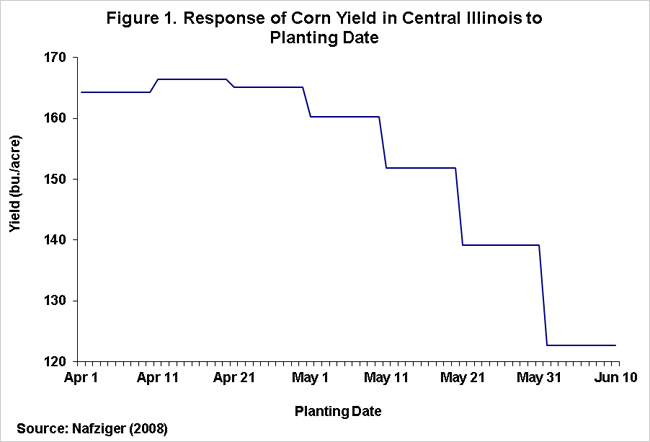 The yield response indicates a slight yield advantage for corn planted in mid-April, but a generally very flat yield response for corn planted between early April and early May. In contrast, there is a yield penalty associated with corn planted later than early May, with increasingly large penalties as planting occurs after mid-May. The research on yield response attempts to isolate the impact of planting date, with other factors generally held constant. Those other factors vary from year-to-year so that both high and low yields can be associated with early and late planting. Contrary to popular opinion, however, this research indicates that there is not a substantial yield premium for early planting, but confirms that there is a notable yield penalty for late planting. The potentially beneficial impact of planting a large portion of the crop early, then, is in the avoidance of the yield penalty of late planting.

The yield and planting results reported here reflect field level results. In the big picture, the market issue is the likely impact on the U.S. average corn yield resulting from planting dates that vary widely across the country. Our previous modeling work has found that corn yields in the U.S. are reduced fractionally for each one percent of the crop planted late. For that work, late corn planting is defined to be after May 30 for 1985 and earlier and May 20 for 1986 to the present. The percentage planted late nationally using these definitions is calculated from the USDA’s weekly Crop Progress report and is presented for 1975-2011 in Figure 2. 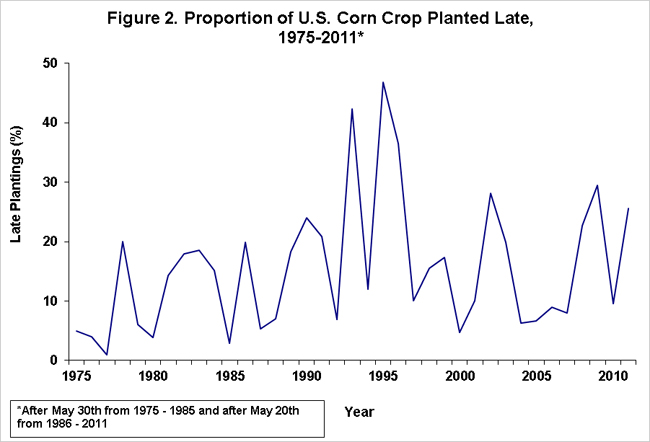 So far, it appears that 2012 will be a year with minimal late plantings. Since 1975, late planting in the five years with the smallest portion of the crop planted late averaged 3.3 percent, compared to the average for the entire period of 15.4 percent. Excluding the 5 years with the most late plantings (average of 36.7 percent), an average of 12.1 percent of the crop was planted late. We can use these averages to project the potential yield impact in 2012 of earlier than normal planting. If late planted corn acres in 2012 are in the range of the previous years of early planting rather than at a more typical level, the U.S. average yield potential might be as much as 2 bushels higher than in a normal year, everything else equal.

If a smaller than normal portion of the 2012 corn crop is planted late, expectations should be for an average U.S. yield as much as two bushels above trend unless there are offsetting factors. One of the potentially offsetting factors is the dry soil conditions at planting time in portions of the western Corn Belt. Actual yields in 2012, like all years, will be most heavily influenced by summer weather conditions.