Unusually warm weather in March and early April provided the opportunity to start planting the 2012 corn crop earlier than normal. While there is little doubt that some corn has been planted much earlier than usual, determining whether the crop in total is being planted at a record pace is not as straightforward as it may seem at first glance. The problems include: i) corn planting is generally spread over a relatively long time period, ii) the timing of planting differs substantially by region of the country, and iii) there are several ways to characterize how early or late the crop is planted. One consistent measure is the date at which planting in those states in the heart of the Corn Belt reaches 50 percent completed, as reported in the USDA’s weekly Crop Progress report. We previously examined this measure in the report found here.

The history of the number of days before and after May 1st that planting progress reached 50 percent in Illinois is shown in Figure 1. The first observation is that over time there has been a clear trend of reaching 50 percent completion earlier. In the 1960s the 50 percent date tended to be about 15 days after May 1st while in recent years it has tended to fall near May 1st. This implies that corn is planted in Illinois about two weeks earlier than was the norm five decades ago. More formally, the fitted trend line indicates that 50 percent planting progress in Illinois has been reached nearly 0.4 days earlier each year since 1960. The trend is smaller, but similar, in Iowa (0.34 days) and Indiana (0.26 days). 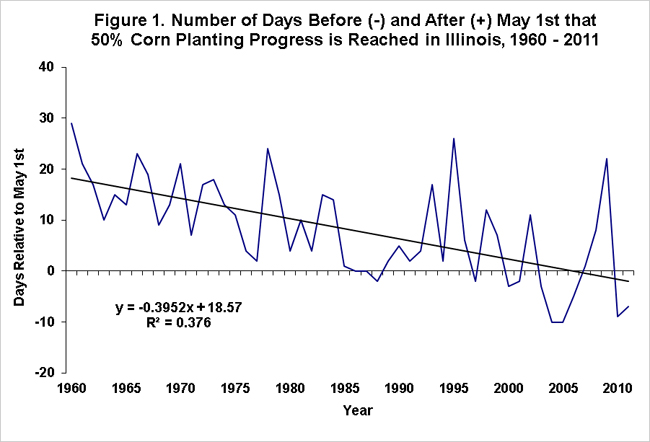 Figures 2 through 4 present the trend-adjusted calculations of the number of days before or after May 1st that corn planting progress reached 50 percent in Illinois, Indiana, and Iowa, respectively. Several observations can be made. First, the number of days before or after May 1st of 50 percent completion has been in a much narrower range for Iowa than for the other two states. Second, planting tends to reach 50 percent complete later in Indiana than in the other two states. Third, the range in the trend-adjusted date of reaching 50 percent completion has been larger in all three states over the past two decades than in the previous three decades, particularly in Illinois and Iowa. 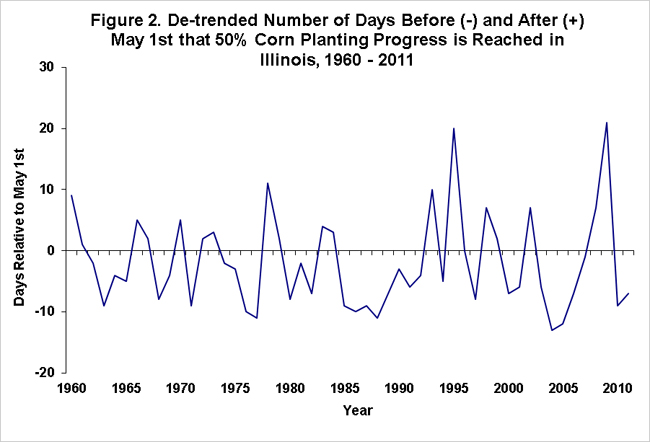 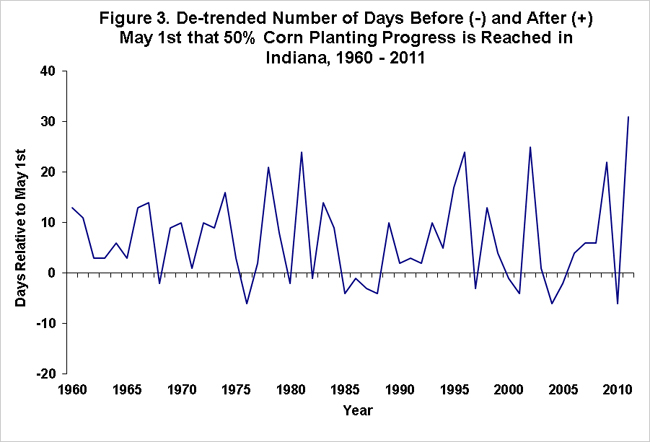 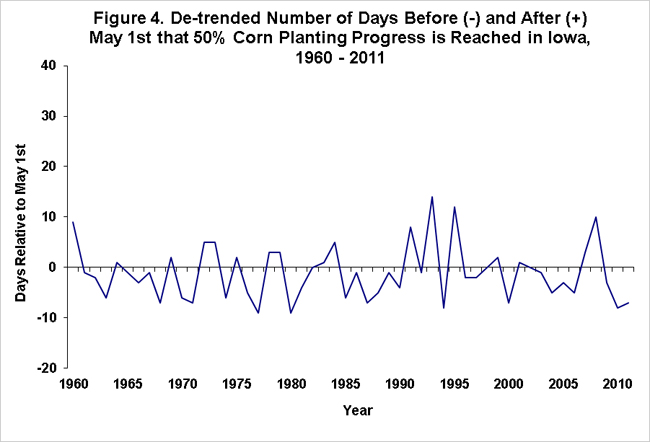 Corn planting in 2012 will reach the 50 percent completion date earlier than any other year since 1960 in Illinois and perhaps in Indiana as well. While Iowa is not likely to set a record early date, it is likely that Iowa will reach 50 percent complete well before its trend date. While some records will be set in 2012 it is important to keep in mind that other years have seen corn planting almost as early. The main market implication is that a smaller than average percentage of the U.S. corn crop is likely to be planted late (after May 20) and incur the yield penalty associated with late planting. As indicated in our post of March 23 a smaller than average portion of the crop planted late supports the expectation for the 2012 corn yield to be about two bushels above trend, if there are no other offsetting factors later in the season.