The Farm Bill recently passed by the Senate outlines some major changes to programs included in the Commodity Title. As expected, the direct, counter-cyclical, and ACRE programs were replaced by a revenue program referred to as Ag Risk Coverage (ARC). This shift towards a risk-based program has implications for the relative impact on crop producers across the country. In general, while the expected overall levels of support for producers will decline due to budget cuts, moving from a program which provides fixed payments to farmers which are proportional to productivity levels (direct payments) to a program which provides support when revenue declines from an historical average benchmark (ARC) will tend to favor producers in areas of higher crop yield risk. Today’s post estimates this effect for Illinois corn and soybean producers by comparing support levels under the direct payment program to the expected payments from the Senate’s county-level ARC program.

The proposed ARC program allows farmers to choose between a farm- and county-level design which provide coverage for losses ranging from 11% to 21% of the revenue guarantee. Alternatively, the program can be viewed as having an 89% coverage level with a cap on payments equal to 10% of the revenue guarantee. Further details about the ARC program were provided in last week’s post summarizing the first draft of the Senate’s Farm Bill, and future posts will be provided to reflect additional changes as further progress is made in the process.

Again, the estimates reported below are based on the comparison of direct payments and the county-level ARC design for corn and soybeans in Illinois. Expected counter-cyclical program (CCP) payments were not considered given the high levels of corn and soybean prices relative to their CCP target prices. The comparison also does not include expected ACRE payments. Thus, the estimates for percentage changes in expected support levels are most relevant for Illinois farms which did not enroll in the ACRE program. Including expected ACRE payments would tend to further increase the estimates of reduction in support under the county-level ARC program. 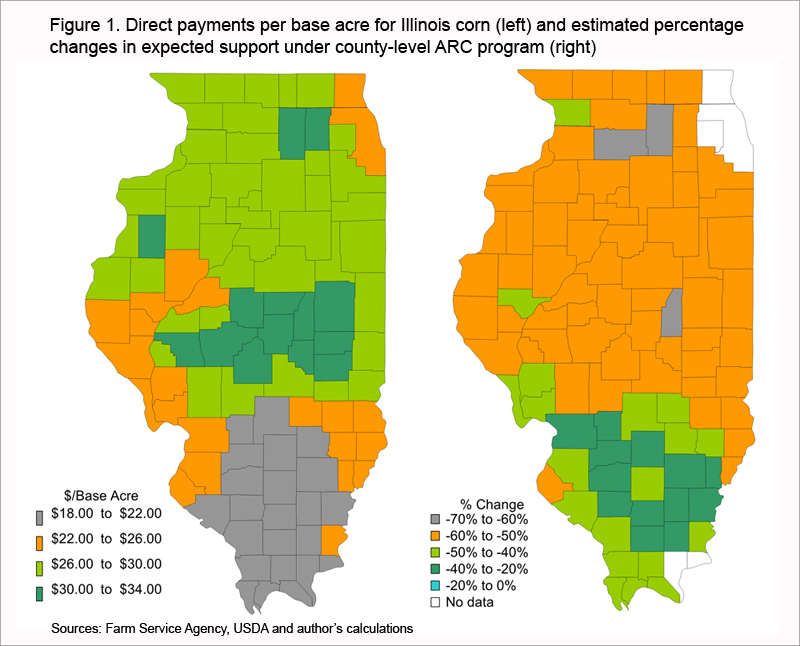 Figure 1 illustrates average direct payments received on corn base acres in Illinois counties and the estimated percentage reduction in support under the county-level ARC program as it is defined in the current version of the Senate Farm Bill. Direct payments for corn base acres range from $18 to $22 per acre in southern Illinois, $26 to $30 throughout much of northern Illinois, and are more than $30 per acre in areas of central Illinois. The average county-level ARC program payment was estimated to be between $13 and $14 per acre for corn in Illinois, with expected payments in Illinois counties ranging from about $9 to $15 per acre.

Shifting to the county-level ARC program option is estimated to result in reductions in expected support levels by more than 50% throughout northern and central Illinois, while most of southern Illinois is estimated to realize expected reductions between 20% and 50%. While ARC payments, like direct payments, are proportional to productivity levels, the higher relative yield risk observed in most areas of southern Illinois causes expected ARC payments to be relatively higher. In general, the estimated variation in expected ARC payment levels across the state is smaller than the variation in direct payment levels. This results in a smaller percentage change in support for most southern Illinois counties.

Figure 2 illustrates direct payments on soybean base acres in Illinois and the estimated reduction in support under the county-level ARC program. The pattern of variation in direct payments for soybeans is similar to that for corn, with central and northern Illinois receiving larger payments per acre due to higher yields. Direct payments for soybeans are typically $12 to $15 in most of northern and central Illinois, and $8 to $12 per acre in southern Illinois. Estimates of expected county-level ARC payments average approximately $6.50 per soybean acres across the state, and range from just over $4 to just under $8 per acre. The estimated reduction in support under the proposed ARC program ranges from more than 50% in most of northern and central Illinois, with the majority of southern Illinois counties estimated to realize a reduction of less than 50%. 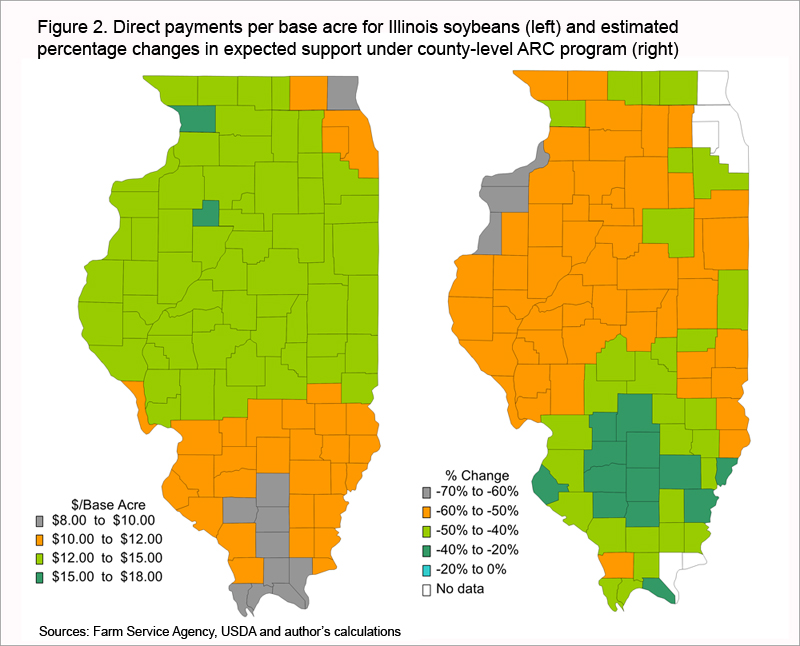 Expected payments from the county-level ARC program outlined in the Senate’s Farm Bill are estimated to be smaller than direct payments received by corn and soybean producers throughout Illinois. The estimates also indicate a relative shift in support from areas/crops with higher productivity and lower yield risk to areas/crops with higher yield risk. Thus, while all Illinois corn and soybean producers should expect lower levels of support over the next Farm Bill period, the magnitude of this effect will vary across the state. This result is expected given the shift from a program that provides payments which are proportional to average productivity to a program which provides both yield and price risk protection over time.

Beyond the expected changes in support levels discussed here, the change in the timing of payments must also be considered. The ARC payment estimates are averages across possible outcomes based on simulation modeling. ARC could provide significantly larger payments if commodity prices decline over the next Farm Bill period or low crop yields are realized, or the program could provide very little or zero support like the ACRE program for certain crops over the 2008 Farm Bill period.

Future posts will provide further analysis of the proposed changes to the commodity title and the resulting impacts on producers of other crops and in other regions of the country.