Debate over limits on payments by farm safety net programs has become increasingly passionate. In the current 2012 Farm Bill debate, significant attempts likely will be made (1) to further tighten existing payment limits and (2) to implement limits on crop insurance. Therefore, this post discusses the history and several interrelated topics concerning farm payment limits. Please note, this discussion neither endorses nor opposes payment limits.

To the author’s knowledge, the first limit on payments by farm programs ($10,000) date to the Agricultural Adjustment Act of 1938. Thus, farm payment limits are nearly as old as the farm safety net itself, which began in 1933. However, payment limits did not become a continuous part of farm bills until the Agricultural Act of 1970, which limited total government payments to $55,000 per farmer per crop. Current limits on payments by individual farm programs are:

Means testing for farm programs, a type of payment limit, was added in the Farm Security Act of 2002. Means testing prohibits or reduces payments to an entity with a high enough income. Specifically, producers with adjusted gross income of over $2.5 million, averaged over the previous 3 years, were ineligible for direct and counter-cyclical payments, marketing loan benefits, and conservation payments. However, an exception was granted if 75% or more of adjusted gross income was from farming, forestry, or agriculture. After lengthy debate, the means test was tightened to the following in the Food, Conservation, and Energy Act of 2008:

Why Interest in Payment Limits Has Increased?

It is not clear why payments limits became a continuing part of the farm bills with the 1970 Act, but one likely reason was the transformation from programs that established floors under prices to programs that made payments to farmers. This transformation began in the 1960s. A second likely reason reflects an on-going historical trend that underpins much of the historical and contemporary debate over farm program payment limits. 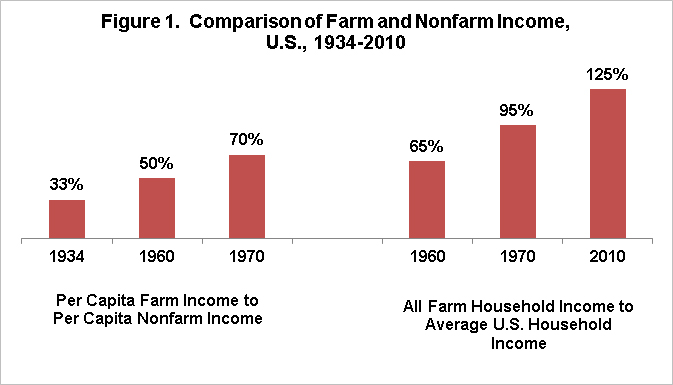 Debate occurs over whether these measures of farm well being are the most appropriate. One argument is that the appropriate comparison is between farm businesses and self employed Americans. Nevertheless, it is difficult to say that a different measure would alter the long run trend depicted by the above data. Also, it is important to remember that farm programs involve income transfers from taxpayers to farmers. Thus, comparison with average household income is at least one relevant perspective. In summary, the historical trend of increasing parity between farm and nonfarm income has prompted proponents of payment limits to ask whether it is fair that farms, in particular large farms, receive government payments when their income is close to or above the national average for all households.

Payment limits are usually thought of limits on payments to a payment entity. As noted above, entity payment limits come in the form of means tests and limits on payments by a specific program or a set of programs. However, a second type of payment limit exists: limits that reduce payment per unit of a commodity to less than 100%. For example, counter-cyclical and ACRE payments currently are made on 85%, not 100%, of eligible acres. Another example is that the highest coverage level for individual crop insurance is 85%.

In contrast, per unit output payment limits almost always seek to reduce the overall cost of a program. They can attain this goal because they affect all recipients of farm program payments.

While different in focus, the two types of payment limits do interact. In particular, reducing per unit payments reduces the probability that entity payment limits will be exceeded. Thus, for example, the U.S. might choose to address the debate over crop insurance subsidies for large farms by treating it as an associated outcome of reducing the insurance subsidy level for all farms in order to reduce the cost of farm safety net programs.

In contrast, limits on payments seem inconsistent when a program’s objective is to help manage risk. Risk management programs will make large payments when a sizable shortfall in revenue, yield, and/or price occurs. Moreover, occurrence of such a shortfall is not known when planting decisions are made. To limit payments when they are most needed is inconsistent with the objective of helping to manage risk.

The history of farm policy and underlying economic trends suggests that payment limits are likely to become an even more important topic of debate in farm bills. The only exception might be if farm family income deteriorates relative to non-farm family income. Given this situation, it is important that informed debate occur, particularly in regard to how to design payment limits to minimize negative impacts on the efficiency with which farmers use resources.