Based on an analysis of the recent trend in the U.S. average corn yield and a near record early planted crop, the USDA’s May and June WASDE reports indicated prospects for a record U.S. average corn yield of 166 bushels in 2012. With much of the Corn Belt crop now entering the critical stage of the growing season, this seems to be an appropriate time to re-assess yield prospects.

To date, weather conditions have been generally favorable for crop development in a portion of the Northwest Corn Belt and in some far eastern growing areas. This is reflected in the crop condition ratings included in the USDA’s weekly Crop Progress report. As of June 24, 71 percent or more of the crops in Minnesota, North Carolina, North Dakota, Pennsylvania, and South Dakota were rated in good or excellent condition. Weather conditions have been far less favorable in the areas traditionally identified as the Eastern Corn Belt and in a few states in the western Corn Belt. As of June 24, 51 percent or less of the crops were rated in good or excellent condition in Colorado, Illinois, Indiana, Kansas, Kentucky, Missouri, Ohio, and Tennessee. Ratings were especially low in Illinois, Indiana, and Missouri. The rest of the states included in the weekly report (Iowa, Michigan, Nebraska, Texas, and Wisconsin) had 60 to 68 percent of the crops rated in good or excellent condition.

Based on growing season weather to date and current crop conditions, what level of yield should now be expected? First, we should note that an above-trend corn yield requires timely planting and very favorable weather conditions over a very wide area throughout the entire growing season. Most important are weather conditions during the reproductive and grain filling stages of the growing season, about late June through August in much of the Corn Belt this year. Above average precipitation and below average temperatures during that period are most conducive for high yields. Most recently, these type of conditions prevailed in 2004 and 2009. Based on weather and crop conditions to date and the hot, dry near term forecast, an above trend yield is clearly not in the cards this year. 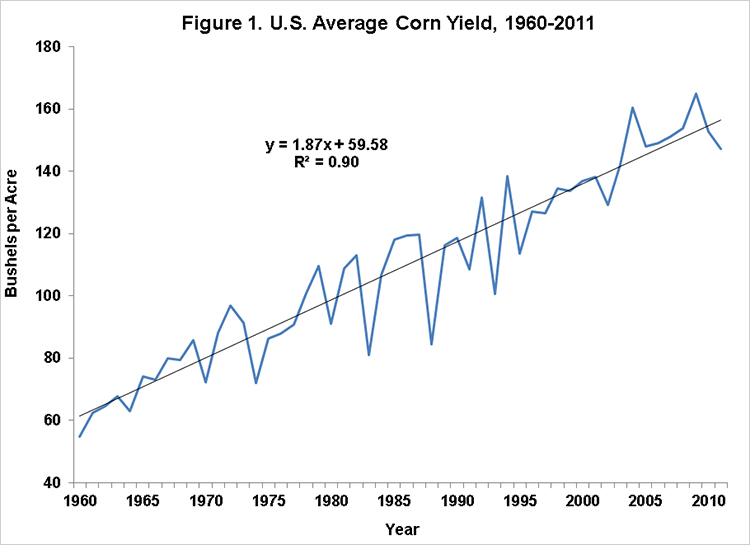 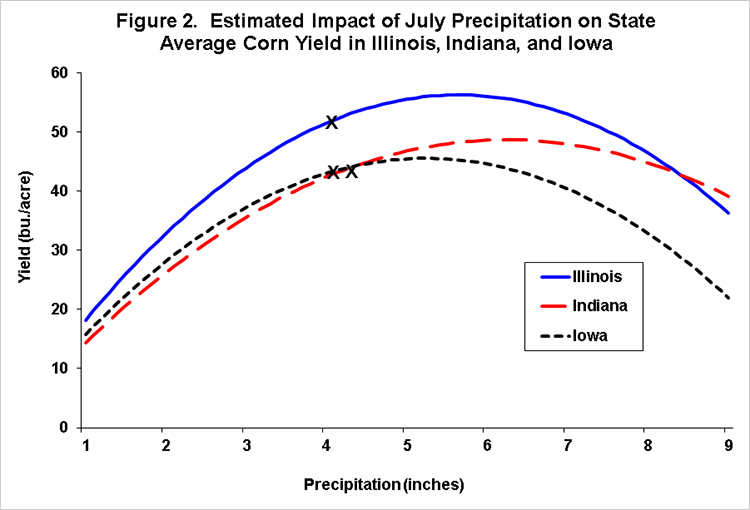 In addition to the yield implication of the magnitude and distribution of summer precipitation is the yield implication of summer temperatures. The weather models reveal a negative, but linear, relationship between monthly average temperatures in July and August and state average corn yields (illustrated in Figure 3). If the current and upcoming period of above average temperatures extends further into the growing season, additional yield losses would be expected. 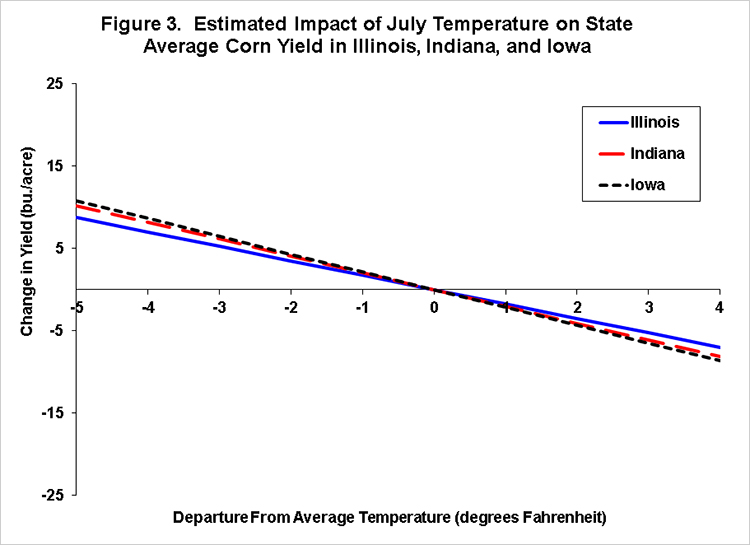 Current conditions point to a U.S. average corn yield below trend again in 2012, but the extent of the yield shortfall will remain uncertain for another 10 weeks. With the large increase in corn acreage this year, an average yield above 150 bushels would require minimal rationing during the year ahead. Based on current and upcoming weather conditions, however, there is risk that the average yield will fall below that level, requiring higher prices to ration the crop. The USDA’s June 29 Acreage report, on-going weather conditions, and weekly crop condition ratings will be followed closely in order to assess production prospects. The USDA’s National Agricultural Statistics Service will provide the first survey-based yield forecast of the season in the August 10 Crop Production report.