The 2012 corn crop will be much smaller than anticipated earlier in the year when producers planted near-record acreage in a very timely fashion. Prospects then were for an above-trend average U.S. yield and a record large crop in excess of 14.5 billion bushels. A crop of that size would have allowed for an increase in consumption and some build-up in inventories and resulted in much lower prices than experienced over the past year. In May, for example, the USDA saw prospects for U.S. corn stocks to grow from 850 million bushels at the end of the current marketing year to 1.88 billion by the end of the 2012-13 marketing year. The average farm price was expected to decline from $6.15 this year to $4.20 to $5.00 next year.

Weather conditions since the crop was planted have been generally unfavorable over large areas so that crop conditions have deteriorated and yield prospects have declined sharply. In the first report of the year the USDA’s Crop Progress report indicated that 72 percent of the crop was in good or excellent condition. By July 8, only 40 percent of the crop was in good or excellent condition. The USDA’s May WASDE report indicated potential for a national average yield of 166 bushels. Just two months later the July report indicated potential for a yield of 146 bushels. The USDA’s July supply and demand projections for the 2012-13 corn marketing year are presented in the first column of Table 1. Despite the drop in yield these projections result in year ending stocks in excess of beginning stocks. The mid-point of the expected average farm price for 2012-13 is $5.95, $0.35 below the average now expected for 2011-12.

A continuation of widespread stressful weather suggests that the average U.S. corn yield could be lower, perhaps much lower, than 146 bushels. At the same time, the price of December 2012 corn futures has increased about $2.00 since mid-June as production prospects continued to deteriorate, putting prices well above the average currently projected by USDA. A key question in the market outlook is whether the current level of prices is high enough to ration usage in light of substantially diminished expectations about supply. Further questions about the price level are raised by the prospect of even smaller production if weather conditions do not take a turn for the better.

We provide estimates in Table 1 of how the corn crop would be allocated to various uses and the implications for price under several alternative yield scenarios. We consider scenarios where U.S. average yields range from 140 bushels to 125 bushels, in 5 bushel increments. Please note that the yield scenarios reflect what we believe is a plausible range of yield outcomes for this “what if” analysis, but we do not take a position on the likelihood of any particular scenario at the present time.

The projections of total production, total consumption, and consumption by category for each scenario are based on several key assumptions:

The projections based on the previous assumptions are found in Columns 2 through 5 of Table 1. Note the very modest declines in feed and residual use of corn with lower yields and higher prices, which seems to be a contradiction of assumption (6). However, total corn-based feed consumption would decline much more rapidly than implied by the corn feed and residual projection. This is due to the decline in feeding of distiller’s grain, which is driven by the more rapid pace of decline in ethanol use (and production). Progressively more liquidation of livestock numbers would be required with each 5 bushel decline in the average corn yield through this implied distiller’s grain pathway. 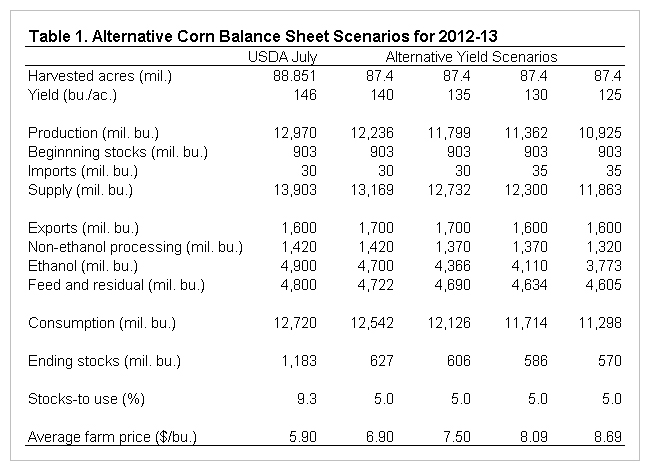 The projections also imply that ethanol production would eventually drop below the mandated level of blending. We calculate the mandated level for the 2012-13 corn marketing year at 13.6 billion gallons, which would require processing of about 4.9 billion bushels of corn. However, as noted in the discussion of assumption (7) part of that the mandate can be satisfied by accumulated RINS from production that exceeded the mandate the past two years. We estimate that maximizing the use of those RINS suggests that a minimum of about 3.92 billion bushels of corn would be required to meet the mandate. Under the demand assumptions in this analysis, an average yield much below 130 bushels would not provide adequate corn supplies to meet the mandate even making full use of the available stock of RINS credits. Such a situation would require more severe reductions in consumption in other categories (likely in feed use) or some partial waiver of the mandate. Nonetheless, it is still noteworthy how low the U.S. average corn yield can sink before the RFS mandate becomes binding and much more drastic adjustments are forced on other categories of use. This highlights the key role that the RINS credits are likely to play in the upcoming marketing year.

What about the question posed at the beginning of this post? Is the current level of prices high enough to ration usage in light of substantially diminished expectations about supply? In central Illinois, the current forward bid for harvest delivery of corn is about $7.20. This is consistent with the scenarios where yield is between 135 and 140 bushels. If yield turns out to be above 140 then current prices would appear to be sufficient, and perhaps more than sufficient, to ration usage. An average yield of 135 bushels or less would require substantial further rationing, resulting in record high average prices. Under such a scenario, history suggests that prices may go well above the expected average price in order to initiate the additional rationing process. Prices have probably not yet gone high enough to accomplish the necessary rationing if the average yield is below 135 bushels.

In closing, it is important to emphasize that our analysis should be viewed for what it is–a simple, first take on what might happen under alternative corn yield scenarios. How actual market dynamics will be worked out is fraught with complexities. In particular, we are in uncharted territory regarding the interaction of the corn, ethanol, and gasoline markets in a major drought. This adds even more uncertainty to what is already an extremely volatile market situation.