According to economic theory, consumers decide how much disposable income to spend on various items to create a “basket” of goods and services that maximizes each individual’s utility. Because each person has different tastes and preferences, the exact combination of items and the amounts spent on each particular item in the basket will differ for each individual. However, all of these individual purchases by every consumer can be combined to show how the marketplace allocates its spending and how much consumers as a group spend for each particular item.

Expenditures – the quantity purchased, multiplied by the price paid – combines both quantity and price into a single number, making this statistic a useful measure of consumer demand. Once it is adjusted for population growth and inflation, the result is a figure called “real per capita expenditures” that measures inflation-adjusted spending by individual consumers.

The expenditure data used in this posting are compiled by the Livestock Market Information Center (LMIC) from various government sources. Without getting bogged down in all the details, USDA’s “total disappearance” number – total production, plus imports, minus exports – is the starting point for determining the quantity purchased. It is then adjusted from a carcass basis to a retail-weight basis, and divided by the U.S. population to put it on a per-person basis. The price paid is based on spending data from grocery stores collected by the Bureau of Labor Statistics, and is adjusted for inflation by converting into 2011 dollars.

Using real per capita expenditures has certain advantages and disadvantages relative to other ways of estimating beef demand, but it is interesting that the final results from all these methods are similar. One advantage with the expenditures approach is that we can monitor the quantities and prices that go into the final number. These details are useful in helping us better understand where cattle prices have been in the past, and where they might be headed in the future.

Figure 1 shows that the average amount that each consumer spent on beef, on an inflation-adjusted basis, tumbled by more than 50% in the 20-year period between 1978 and 1998. Spending collapsed from $539.15 per person to $260.25 per person, all in 2011 dollars, and the amounts purchased slid from 87.5 pounds per person to 68.1 pounds per person, all on a retail-weight basis. It’s clear that the industry had a serious demand problem during this period, because consumers were able to cut spending by one-half on an inflation-adjusted basis and still receive 78% as much product. Stated differently, the industry supplied three-quarters as much beef but received just half as many dollars. 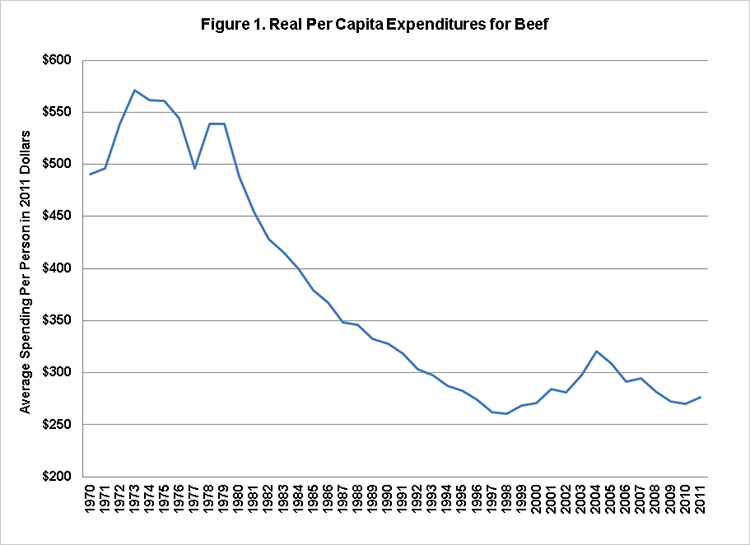 Per capita expenditures recovered through 2004, bouncing back to $320.40 in 2011 dollars for 66.2 pounds on a retail-weight basis. Between 1998 and 2004, consumers spent more inflation-adjusted dollars ($60.15) for less beef (1.9 pounds) – a textbook example of stronger demand. Even more remarkable is the fact that the high point occurred in the calendar year immediately following the December 2003 BSE discovery.

Most of those gains were given back in the 2005-2010 time period, and expenditures per person bottomed out in 2010 at $270.05 for 59.6 pounds of retail-weight beef. The upturn beginning in 2011 is expected to continue through 2012, but what will happen after that is anyone’s guess. Beef supplies will be down substantially in 2013, and the latest USDA World Supply and Demand Estimates (WASDE) show per capita consumption for 2013 at 54.8 pounds, a drop of 2.4 pounds from 2012 projected levels. But if the economy remains soft and unemployment remains high, it seems unlikely that consumers will be willing to pay substantially more dollars for less beef, as they did in 1999-2004 when economic conditions were much more positive.

Consumer spending for beef will also have a bearing on fed cattle prices. Although reduced supplies of slaughter cattle should give the market a firm undertone, the $130-plus levels being projected by the futures market for 2013 may require some help from the demand side to make this happen.