In the face of a small corn crop and high prices, there has been a great deal of debate about a partial temporary waiver of the Renewable Fuels Standards (RFS) mandate for ethanol in 2013. Our analysis of the likely impacts of such a waiver can be found here. While the headlines have focused on the short-term implications of waiving the ethanol mandate in 2013, a potentially much larger issue looms on the horizon. Beyond 2013, there are real questions about the feasibility of meeting the ever-increasing requirements of the RFS, and this concern goes beyond the well-known difficulties with meeting the mandate for cellulosic biofuels. The purpose of this post is to show why the RFS is likely to collide with market realities in the near future.

We begin by reviewing the RFS requirements for minimum domestic biofuels consumption in the U.S. as summarized in Table 1. There are three categories in the RFS and each has its own minimum volumetric mandate: renewable, advanced, and total. Renewable biofuels is generally assumed to be corn-based ethanol but this is actually not explicitly required by the RFS legislation. Instead, corn-based ethanol has been the cheapest alternative for this category that also meets the environmental requirements of the RFS. Advanced biofuels has three sub-categories: cellulosic, biodiesel, and undifferentiated. Cellulosic biofuels have been in very limited supply, so the Environmental Protection Agency (EPA), the government agency charged with enforcing the RFS mandates, has written down the cellulosic mandate to near zero (8.65 million gallons in 2012). The biodiesel mandate was established as a minimum of one billion gallons per year from 2012 through 2022, with larger amounts subject to EPA approval. That mandate has been set at 1.28 billion gallons for 2013. A key point is that to date the EPA has not written down the total mandate for the RFS at the same time as it has reduced the mandate for cellulosic biofuels to near zero. This means that the burden of fulfilling the total advanced component of the mandate has fallen almost entirely on the biodiesel and undifferentiated categories. 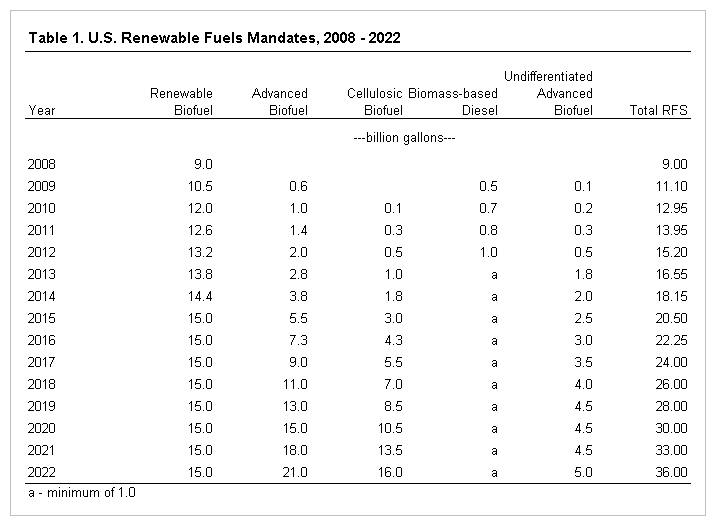 There are two separate but related issues surrounding the implementation of the RFS in the near future. One is the so-called blend wall for renewable biofuels (almost entirely ethanol) and the second is the availability of advanced biofuels feedstocks. We illustrate the effect of these issues using a baseline scenario for RFS implementation. Table 2 presents the RFS baseline for the next three years (2013-2015) under the simplifying assumptions that (1) cellulosic mandates will continue to be written down to a level near zero, (2) the biodiesel mandate remains at 1.28 billion gallons, and (3) the total RFS is not changed. 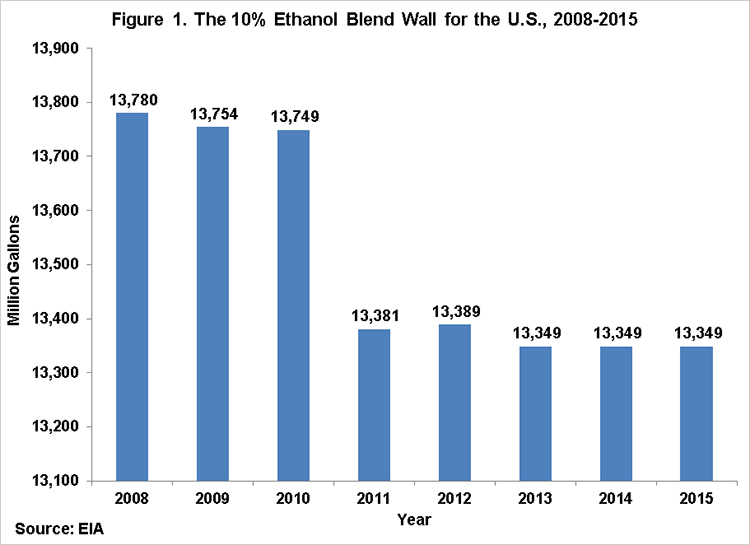 These alternatives provide a relatively straightforward solution to the blend wall in 2013, but the blend wall becomes much more problematic in 2014 and beyond. Without an increase in gasoline consumption or an increase in consumption of E-15 and E-85, the difference between the mandate and the physical ability to blend grows from 500 million gallons in 2013 to 1.1 billion gallons in 2014 and 1.7 billion gallons in 2015. RINS credits from previous discretionary blending would likely be exhausted sometime in 2014. If the blend wall could not be sufficiently expanded to blend 15 billion gallons of renewable biofuels by 2015, the mandate would have to be met with discretionary blending of biodiesel since the blend wall effectively caps the amount of ethanol that can be blended and qualify as advanced biofuel. The possibility that renewable mandates would have to be met with biodiesel leads directly to the second issue of the availability of feedstocks for biodiesel production.

Assuming that each gallon of biodiesel (100 percent methyl ester, B100) requires about 7.5 pounds of feedstock, the mandate for 1.28 billion gallons of biodiesel in 2013 would require about 9.66 billion pounds of feedstock. Some portion of that requirement could be met with animal fats, waste grease, and animal waste and byproducts. Various estimates of that potential have been made. Census Bureau estimates of fats and oils consumption for methyl esters available through July 2011 suggest that total might be near 3 billion pounds per year. The remainder of the feedstock, about 6.66 billion pounds, would be various vegetable oils, primarily soybean oil.

The dilemma presented by the magnitude of vegetable oil requirements under the scenarios described here is two-fold. First, by 2015 biodiesel production used to meet the advanced biofuels requirement would be nearly equal in size to the current (2012) total annual domestic consumption of vegetable oil in the U.S. of 28 billion pounds. Extremely large increases in vegetable oil crop production or vegetable oil imports would be required if biodiesel were to be used to meet biofuels mandates. For example, if domestic soybean oil was used to meet all of the advanced mandate feedstock requirements in 2015 this would require approximately 2.6 billion bushels of soybeans (28/10.7). Second, the biodiesel requirements would exceed the current capacity to produce biodiesel, estimated at 2.5 billion gallons by the EPA. Not addressed here, is the third issue of the likely economic feasibility of producing such large quantities of biodiesel.

Part of the undifferentiated portion of the advance mandate could be met by other advanced biofuels, which currently would be almost exclusively imported sugar cane ethanol from Brazil. Recently (2010) Brazil produced as much as 6.9 billion gallons of ethanol and at the peak in 2006 the U.S. imported about 730 million gallons of ethanol from Brazil. If we assume Brazilian production could support the 2006 level of exports to the U.S, this source of ethanol could meet up to 730 million gallons of the advanced biofuels mandate. That would be about half of the undifferentiated advanced biofuels requirement in 2013, but only 17 percent in 2015. This magnitude of use would not significantly reduce the requirement for biodiesel and vegetable oils. In addition, this is where the dilemma comes full circle. Import of additional ethanol brings the blend wall issue back into play. If the vast majority of ethanol in the U.S. is still being used in a 10 percent blend, ethanol imports from Brazil would have to replace domestically produced ethanol. To maintain domestic ethanol production, ethanol exports from the U.S. (to all destinations) would have to increase by as much as the increase in ethanol imports to the U.S. from Brazil.

There is a clear and impending collision of biofuels mandates and the reality of the ability to produce and consume biofuels in the U.S. For renewable biofuels (ethanol) the impending collision underscores the importance of implementing E-15. Widespread implementation by 2014, or even 2015, would solve the blend wall problem. However, there are several reasons for being cautious about the likelihood of this actually occurring on a wide scale. Avoiding the collision for advanced biofuels is likely to require not only writing down the cellulosic mandate, but also the total RFS mandate. Otherwise, a new and even larger conflict between food and fuel use of crops is in store due to the huge potential draw on vegetable oil feedstocks. This is a problem that the EPA can solve with the stroke of a pen.