‘Tis the season for negotiating land rental agreements for the 2013 crop year. Recent posts have discussed trends in rental agreements (here) and relative performance of share/flex and fixed cash rent agreements over the past few crop years (here). Today’s post looks at the historical relationship between average cash rent levels in Illinois and average crop revenues. These historical relationships provide some basis for expectations for cash rental rates in the coming crop years.

Figure 1 reports average corn and soybean revenues ($/acre) for the state of Illinois from 1976 through 2012. Revenue is defined as the product of the marketing year price and crop yield reported by the USDA, and is plotted on the left axis for both corn and soybeans. For 2012, the midpoint of the ranges for corn and soybean prices for the 12/13 year from the October WASDE report, and current yield estimates were used. Average cash rents for Illinois ($/acre) are plotted on the right axis. Note that the crop revenue and cash rent axes are defined so that cash rent levels on the right are equal to 40% of the crop revenue axis values on the left. 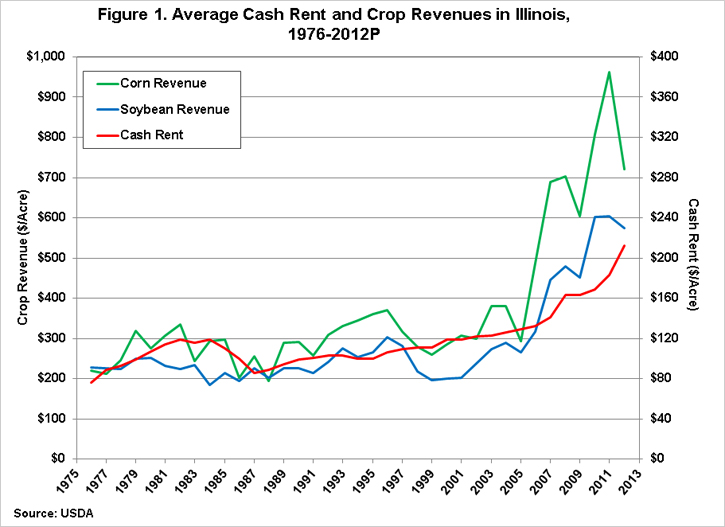 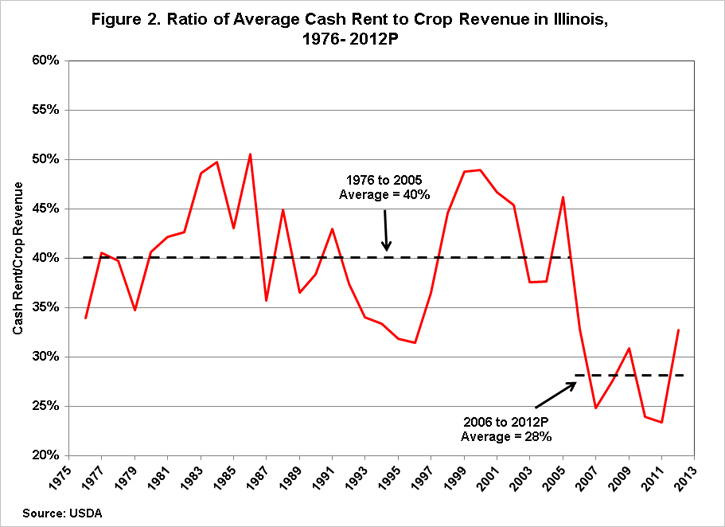 The historical relationship between average cash rents and crop revenue levels in Illinois show that, while average cash rental rates adjust to changes in crop revenues, they do so at a slower rate. In periods of increasing revenues, cash rents will also increase but at a slower rate. Similarly, in periods of declining crop revenues cash rates tend to remain stable rather than immediately adjusting to lower levels. Historically, the ratio of average cash rents to crop revenues has averaged about 40%. With the large increase in revenue levels experienced over the past 7 years, that ratio has declined to an average of 28% since 2005. This suggests that we might continue to see an increase in cash rent levels despite the large yield losses and reductions in revenue for 2012. Furthermore, even if the longer-term outlook is for lower crop prices, cash rent levels could remain stable or even continue to increase as the ratio adjusts to the higher historical level.

However, the many changes experienced in the grain industry over the past decade may cause the historical relationships to be misleading for the future. As pointed out in a recent post (here) ,more and more cash rent agreements are being negotiated on an annual basis in response to increased price variability. This trend will likely reduce the lag effect seen in average cash rent levels.