Prior to 2012, the most adverse growing season weather conditions for U.S. corn and soybeans in recent history occurred in 1988. Now that the 2012 season is over, it is instructive to compare the two growing seasons and the impact on the U.S. average yields of the two crops.

To simplify the comparison of growing season weather, we consider state wide monthly average precipitation and temperature from April through August in Illinois, Indiana, and Iowa. Those weather data for 1988 and 2012 are presented in Table 1 as deviations from averages for the period 1960 through 2012. Note that a positive (negative) sign indicates above (below) normal precipitation and temperature. In April, for example, average precipitation in Illinois was 0.7 inches below average in 2012 and 2.1 inches below average in 1988. Considering the 5-month period as a whole, weather conditions were very similar in 2012 and 1988 in all three states. Average total precipitation for the five months in the three states was 1.2 to 2.0 inches below average and average temperatures were 1.6 to 3.3 degrees above average. However, the pattern of monthly weather was substantially different in the two years. 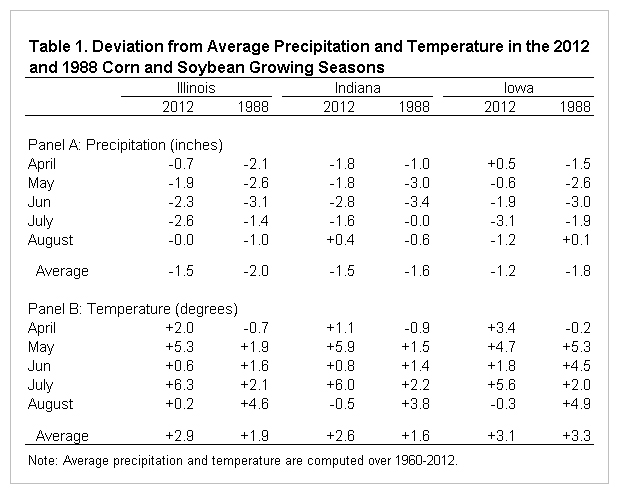 In terms of temperatures, state wide averages were above the long term average in all cases for 2012 except August in Indiana and Iowa. The highest temperatures relative to average in 1988 were in July and August in Illinois and Indiana and in May, June, and August in Iowa. In 2012, the highest temperatures relative to average occurred in May and July in all three states. July was astonishingly hot in all three states in 2012, with temperatures about six degrees above average. This was by a wide margin the hottest July since 1960 (2011 was the next hottest in each state). Temperatures were close to average in all three states in August. Similar to the precipitation pattern, the most stressful temperatures in 2012 occurred in the critical reproductive stage for corn. Average temperatures were much less stressful in August, during the critical reproductive stage for soybeans. Given the weather patterns in those two years, and assuming weather conditions in the three states was representative of the entire production area, the expectation would be that corn yields were more adversely impacted in 2012 than in 1988. Conversely, weather conditions appeared to be more negative for soybean yields in 1988 than in 2012.

For corn, the difference between actual (or forecast) yields is 32.8 bushels for 1988 and 35.6 bushels for 2012. The difference in the magnitudes of the yield shortfalls is consistent with the observed weather patterns in those two years. Most analysts, including the authors, however, calculate the trend yield for 2012 to be above the unconditional linear trend of 158.4 (see this earlier post). Based on a 2012 trend yield of 161 bushels, the forecast yield is 38.2 bushels below trend, 5.4 bushels larger than in 1988, a difference even more consistent with the differences in weather patterns.

For soybeans, the difference between actual (or forecast) yields is 5.2 bushels for 1988 and 7.7 bushels for 2012. The difference in the magnitudes of the yield shortfalls is not consistent with the observed weather patterns in those two years. Additionally, most analysts, including the authors, calculate the trend yield for 2012 to be slightly above the unconditional linear trend of 43 bushels. Based on a 2012 trend yield of 43.5 bushels, the forecast yield is 8.2 bushels below trend, 3 bushels larger than in 1988. Again the larger yield shortfall in 2012 appears to be inconsistent with weather patterns in the two years.