The rapid rise in commodity prices and farm income levels over the past few years has resulted in significant increases in cash rent levels for farm land. Last fall, I wrote a post which showed the trend away from share leases to fixed cash rental agreements in Illinois over the past 15 years. In one of this week’s posts, Gary Schnitkey discussed some other trends in cash rental agreements, including the continued increase in cash rental rates and the shift towards shorter-term or one-year leases. There are a number of reasons why fixed cash rent agreements might be preferred by both tenants and landlords. For example, they are relatively simple, provide the landlord with a fixed return, and provide more autonomy to the tenant in making management decisions. However, fixed cash rents at high levels imply more risk exposure for the tenant if crop returns fall below expectations due to price declines or yield shortfalls, or production costs are above expected levels. This is especially true for farm operators who are highly leveraged and/or rent a considerable portion of their total acres. Tenants in these situations may find it desirable to use a share or flex arrangement, but have difficulty in convincing landlords to consider an agreement which provides variable payments.

Today’s post takes a look at average rental payments resulting from two similar types of share or flex agreements in Illinois, comparing them to recent levels of average fixed cash rents. Expected rental payments for 2012 are also provided and compared to average cash rental rates. The data show that rental payments from the share and flex agreements have been consistently higher than average cash rental rates since 2008. This is true even for the 2012 crop year with yields well below expectations due to the drought.

Data from the USDA and Illinois Farm Business Farm Management Association (FBFM) were used for the following analysis. The historical share rental payments reported in figures 1 to 3 are based on average crop revenues and direct input costs from FBFM for counties in the three regions considered. Note that these are not actual share or flex lease payments; they are calculated values based on farm-level crop revenues and direct input costs. The cash rental rate data are averages for non-irrigated cropland as reported by USDA-NASS for the same counties in each of the regions. The expected 2012 yield levels used in table 1 are based on recent crop reporting district yield estimates for Illinois. The base price for corn and soybeans are the projected prices reported by the Risk Management Agency for the 2012 insurance year, and the April to September average price is based on the monthly prices received at the national level as reported by USDA-NASS.

Figure 1 illustrates average rental rates in Northern Illinois for a 50-50 share rental agreement from 2008 to 2011, where the landlord and tenant share equally in crop revenues and direct input costs (i.e. seed and chemicals). Also included in figure 1 are the average rental rates resulting from a flexible lease which provides the landlord with 40% of actual crop revenues. These two alternative leases result in similar payment levels over time. Finally, the average cash rental rate in Northern Illinois counties is provided from 2008 to 2012. 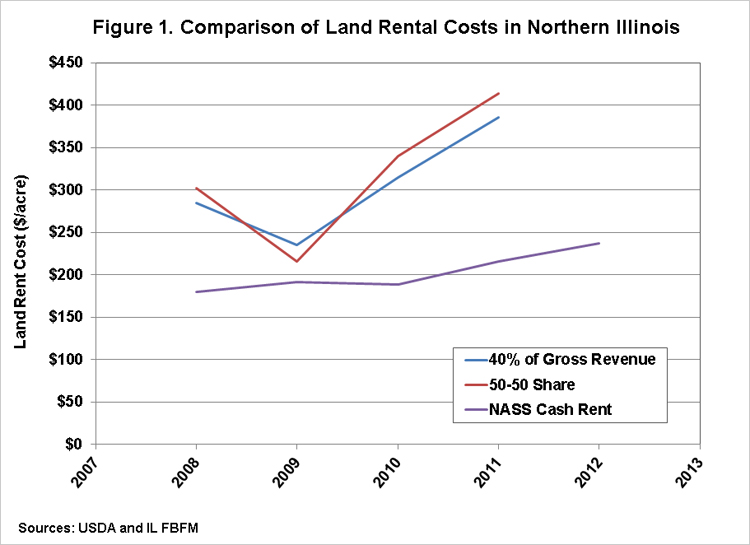 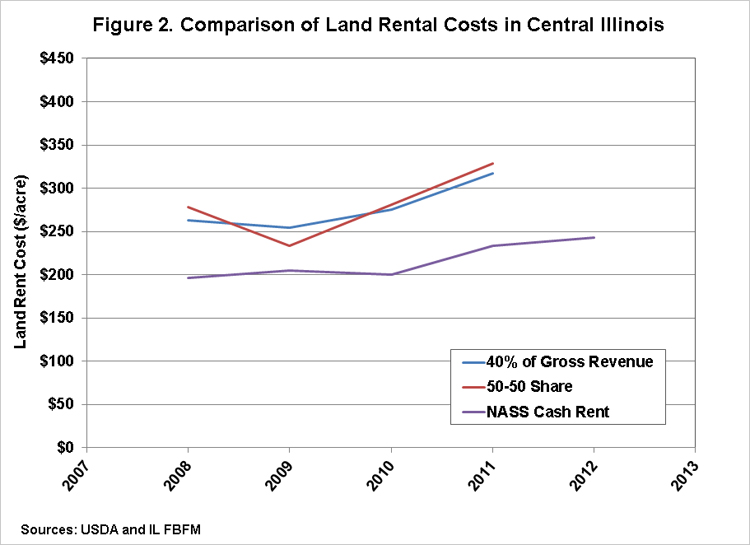 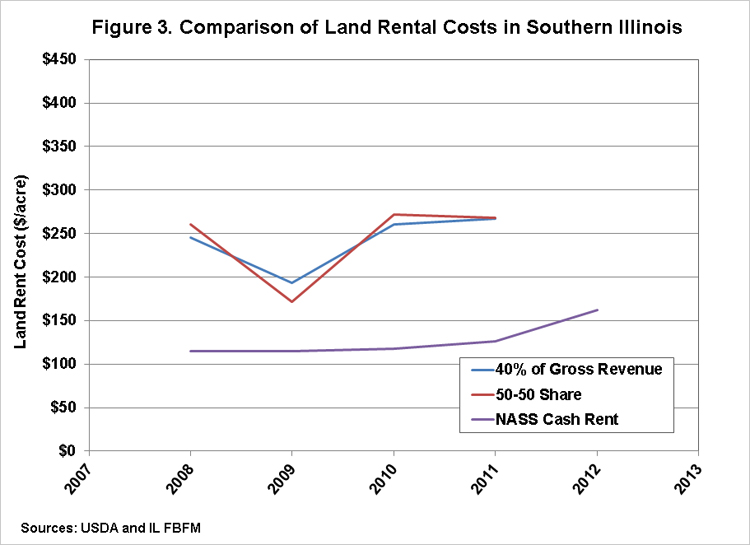 While the share and flex rental rates in figures 1 to 3 have been consistently above average cash rental rates since 2008, it is important to note that this time period was characterized by high and generally increasing commodity price levels and yields relatively close to trend. This raises the question of how a share or flex lease might perform compared with a fixed cash rent contract in a year with large yield losses as are expected for 2012. Table 1 provides some estimates for lease rates from the flexible lease. Yield levels are set based on crop reporting district estimate provided by USDA in September. Two price levels are considered – the crop insurance base or projected price, and the average price received from April through September as reported by USDA. Finally, a crop rotation consisting of 55% corn and 45% soybeans is assumed in calculating the flexible lease rental payments. 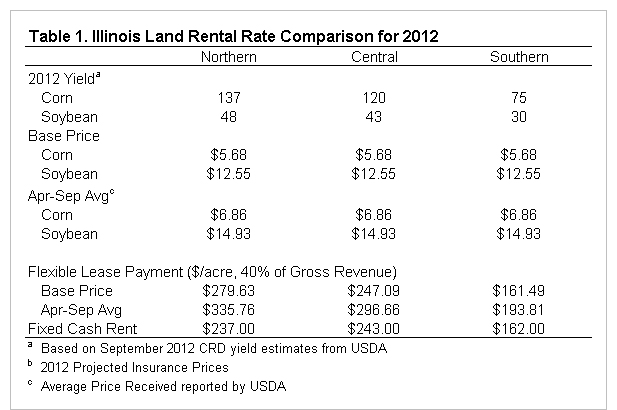 Trends in land rental rates and agreement types suggest that tenants are taking on more risk exposure. This is a serious concern for all farm operators, but especially for those who are highly leveraged and/or rent a large proportion of their acres. Given market trends toward cash rental arrangements, convincing landlords to use a share or flex lease may be difficult. Price and yield levels since 2008 have resulted in the “typical” 50-50 share lease, and a similar flex lease payment equal to 40% of gross revenue, providing payments to landowners which may exceed average fixed cash rent levels in Illinois. This might also be true for the 2012 crop year due to high commodity prices despite large yield losses throughout the state.

However, the averages for share and flex lease payments provided here do not illustrate the full variability in payment levels associated with these types of arrangements. Moving to a share or flex lease will also shift some risk from the tenant to the landlord. Farm-level yields will vary around these averages considerably, implying that share or flex lease payments for some operations will be well below comparable cash rental rates for the area. Similarly, farm-level cash rents also vary considerably around average regional values. Many operations in Illinois are currently paying cash rental rates well above these average values which might also exceed the potential flex lease payments in recent years.