In its October World Agricultural Supply and Demand Estimates (WASDE), the U.S. Department of Agriculture (USDA) increased the estimated feeding of wheat during the current 2012/13 wheat crop year by 95 million bushels to 315 million bushels. This change was prompted by the September 1 stocks report and suggests that increased feeding of wheat will join increased imports and reduced consumption as market responses to the drought-reduced 2012 corn and soybean crops. Therefore, this article examines the historic role of wheat feeding in the U.S. and the factors associated with it.

Wheat Feeding as a Share of Total Wheat Use

USDA currently projects that the feeding of wheat will account for 12.7% of total projected use of U.S. wheat during the 2012 wheat crop year (see Figure 1). This exceeds the average share of 9.1% and is the highest share since the 2000 wheat crop year. Wheat feeding has ranged from 16 million bushels or a 0.7% share in the 2007 wheat crop year to 484 million bushels or a 19.9% share in the 1990 wheat crop year. No linear trend exists over time in the share of wheat that is fed. Historically, wheat feeding is usually concentrated in the first quarter of the wheat crop year, or June through August. In fact, between the 1974 and 2011 crop years, USDA reports that 15% more wheat was fed during the first quarter than was fed for the entire year. While not possible if the use category was only feeding, this data reporting relationship serves as a reminder of the important role residual use plays in this use category. 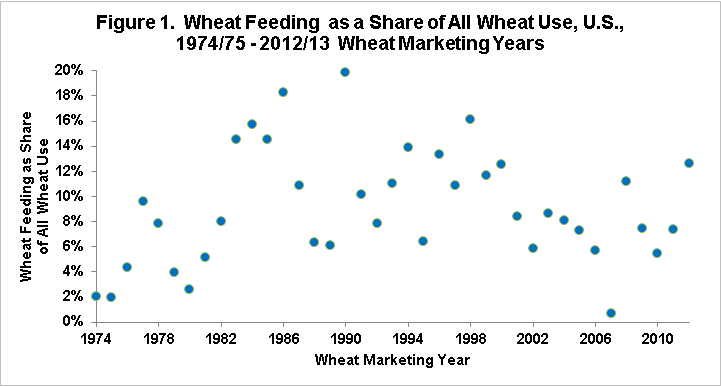 The decision to use any grain, including wheat, in feeding livestock is a complex management decision. Energy and nutritional needs in a balanced feed ration are specific to both the animal species and the type of animal within a species. Moreover, changing the mix of wheat in a ration during a feeding cycle can materially reduce feeding efficiency. Hence, livestock feeders want to be relatively certain that not only is wheat a cheaper source of feed now but will remain so throughout the feeding cycle. In other words, the decision to feed wheat is more of a longer-term strategic decision than a short-term tactical decision. This may partially explain why the share of wheat that is fed is positively and statistically significantly correlated in adjoining years: +0.42. Thus, high wheat feeding in one year is likely to be followed by high wheat feeding next year.

Given the important constraint on rations, economics suggest that the feeding of wheat should be related to (1) the competitiveness of wheat as a feed ingredient relative to the major feed grain, corn, and (2) the profitability of producing livestock and livestock products.

For those who are interested, the measurement of these 2 variables used in this article is described in the text box at the end of this article.

Everything else constant, the higher is the ratio of wheat price to corn price; the more expensive is wheat as a feed ingredient relative to corn and the less wheat that should be fed. This expected negative relationship is reflected in the downward sloping straight line in Figure 2. Over the first 4 months of the 2012 wheat feeding year (June through September), the U.S. wheat-to-corn price ratio is 1.09, close to the lowest observed ratio of 1.08 for the 1990 wheat crop year. The average wheat-to-corn price ratio is 1.43, with the highest being 1.95 for the 2007 wheat crop year. 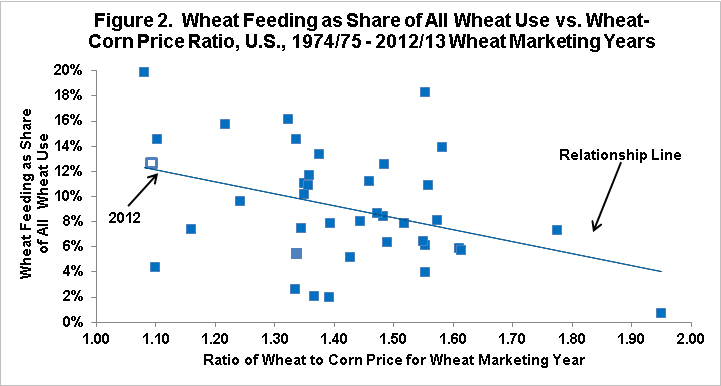 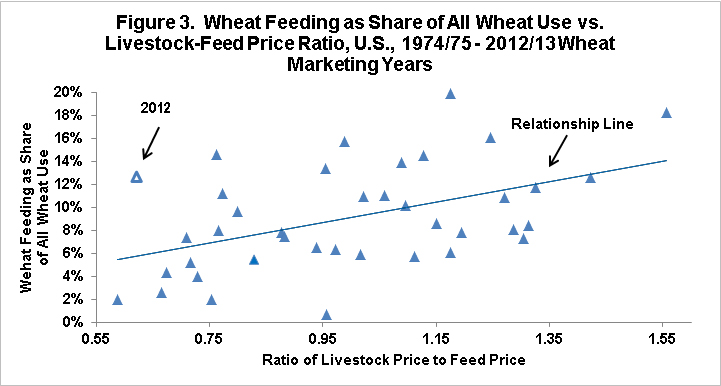 Including both variables in the analysis increases the explanation of the variation in the share of wheat that is fed (see Figure 4). Individually, the wheat-to-corn price ratio and livestock and livestock product profitability explains 13% and 28%, respectively, of the variation in wheat feeding across the wheat crop years. In contrast, including both variables together in the analysis explains 63% of the variation in wheat feeding. This finding illustrates the importance of examining the role of multiple variables when assessing economic relationships. The 2-variable relationship is presented at the end of this article in a text box. 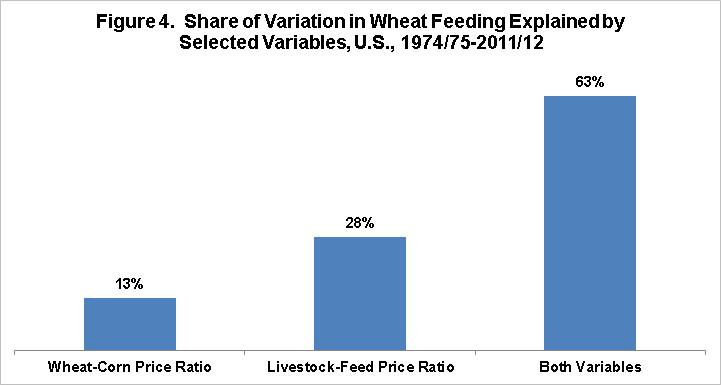 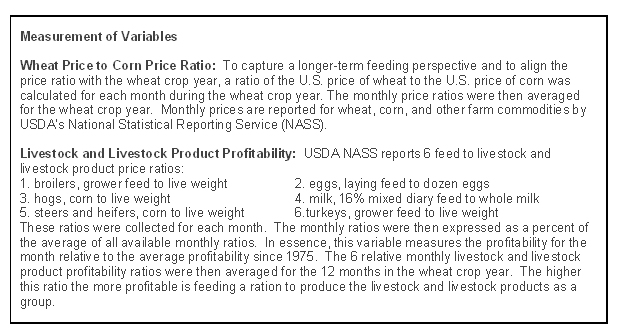