Farmers are sometimes surprised to find that the full amount of a year’s loss from farming isn’t the same loss amount that they can claim as a deduction on their tax return for the year. There are several sets of tax rules that must be met in order for a farm loss to be deductible. Farmers without crop insurance to cover losses should be aware of these rules that may limit the amount of deductible losses that can be claimed. The rules to be aware of include:

The at-risk rules generally apply to all trade or business activities, including farming. These rules apply to farms that are taxed as S corporations and all farms that are not incorporated.2 The farmer is considered to be at risk for the following amounts which are adjusted and determined at the end of each tax year:

The following debts generally do not qualify as debt included in the farmer’s at-risk amount:

Nonrecourse debt is generally debt that the farmer is not personally obligated to pay.

The amount of a loss that a farmer can deduct for the year may be limited to the amount the farmer has at risk in the farming business.

Example 1: Fred’s full-time job is working on the family farm. He purchased the farm, including buildings and all equipment in 2005 for $1 million. Fred purchased the farm with a down payment of $50,000 and a $950,000 mortgage. Fred lives in Illinois, where state law indicates that the mortgage constitutes recourse debt for which Fred will be personally liable in the event of default. After making monthly mortgage payments, Fred paid down $50,000 of the principal amount of the mortgage. Accordingly, at the end of 2012, the principal amount of Fred’s mortgage is reduced to $900,000 and Fred’s equity in the farm is $100,000 ($50,000 down payment plus $50,000 reduction of mortgage principal from making mortgage payments). At the end of 2012, Fred has a farming loss in the amount of $360,000. In addition, Fred had the following additional contributions to the farm business:

Fred’s wife, Carol, works for a medical technology company. Carol received wages in the amount of $200,000 for the year.

A simplified balance sheet at the end of 2012 is as follows. 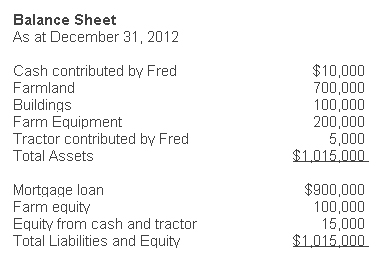 Fred would like to claim at least $200,000 of the $360,000 farm loss in 2012 to use against Carol’s income on their joint return. However, the amount of deductible loss that Fred can claim for the year might be limited by the at-risk amount he has in the farm business. Fred’s at-risk amount for 2012 is calculated at the end of the 2012 tax year4 as follows.

Example 2: Use the same facts as the previous example, but Fred during 2012, Fred had to renew his mortgage and the bank required Fred’s mother to guarantee the mortgage. Guaranteed debt does not count toward Fred’s at-risk amount. Fred’s at-risk amount for 2012 is as follows.

Starting with the 2010 tax year, the excess farm loss rules pose yet another possible limitation on the amount of loss a farmer can deduct. Farms affected by the excessive farm losses rule are those farms which are not C corporations that have received “applicable subsidies”. An applicable subsidy is a direct or counter-cyclical payment received under the 2008 Farm Bill5 or a payment that the farmer elected to receive instead of this type of payment. Any Commodity Credit Corporation loan is also considered an applicable subsidy. The disallowed excess farm loss is the amount of the year’s farm loss in excess of the greater of:

Example 3: Use the same facts as Example 1. During 2012, Fred received direct subsidy payments in connection with his farm. While the at-risk rules indicate that Fred can deduct the entire loss of $360,000 for 2012, he must also determine if the excess farm loss rules apply. Over the previous five years (2007 through 2011 inclusively), Fred had the following amounts of net farm income. 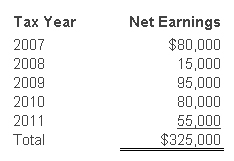 Tax rules require the farmer to classify income and losses into two categories: earned or passive. If the farmer’s loss is from a passive farming activity, the use of any resulting farming loss is limited for tax purposes. A passive farming loss can generally only be claimed against other passive income. It cannot be claimed against the farmer’s earned (or “active”) income from other sources.

The degree of the farmer’s participation in the farming activity determines whether the farming activity is active or passive. If the degree of a farmer’s activity in the farming operation meets one of the several “material participation” tests under the applicable tax rules, the income or losses from the farming operation will not be categorized as passive.6 The losses will therefore not be subject to the limitation of being used only against passive income but rather, can be used against active, or earned income.

A farmer having self-employment income from the farm operation, typically reported using Schedule F, will generally be considered to materially participate in that farming activity.7 While leasing real estate is generally considered a passive activity, special rules exist for farmers that lease land that make it easier for the farmer to meet the material participation requirement. A landlord farmer is considered to be a material participant if that farmer performs any three of the following four activities:

Alternatively, if the landlord farmer does not perform three of the above tests, material participation still exists if the farmer does one of the following:

Once the farmer has a deductible loss, there might be an “excess” loss that cannot be fully utilized within the year that the loss occurred. Here is where a good farm tax return preparer’s advice can provide the farmer with substantial tax savings with some planning and strategy.

The farmer’s loss for the year may be used to reduce taxes either retroactively or proactively. A farming loss for the tax year, after some adjustments9, may result in a farm net operating loss (NOL). Generally, the amount of farm NOL that is not used within the current year to reduce taxable income can either be:

In addition, the farmer has the option of waiving the carryback period entirely if it is advantageous to use the farm NOL exclusively in future years.13 This election is also irrevocable once it has been made. If the election is not made, the NOL amount must be carried back first. Accordingly, it is important for the farmer to obtain proper tax advice that will provide the farmer with the maximum amount of tax savings and tax refunds from the amount of any available NOL. Other considerations include whether the farmer is operating as a sole proprietor, partner, LLC or S-corporation (in which case any loss will pass through to the farmer personally for use on the farmer’s personal return) or as a C corporation (in which case the loss remains at the corporate level for use on corporate tax returns).

9 See IRS Publication 536 for details on the method used to calculate a net operating loss (NOL).