The 2013 version of the Crop Insurance Decision Tool is now available for download from the FAST section and Crop Insurance section of farmdoc. If projected prices and volatilities are the same as last year, most corn and soybean premiums in Illinois will be lower in 2013 as compared to 2012.

Corn and Soybean Premiums in 2013

Concerns have been expressed that 2013 insurance premiums would increase as a result of perceived high losses in 2012. Results from 2012 are not included in 2013 rates as information from the 2012 year was not available at the time 2013 premium rates were set. Information from 2012 will influence rates in 2014. 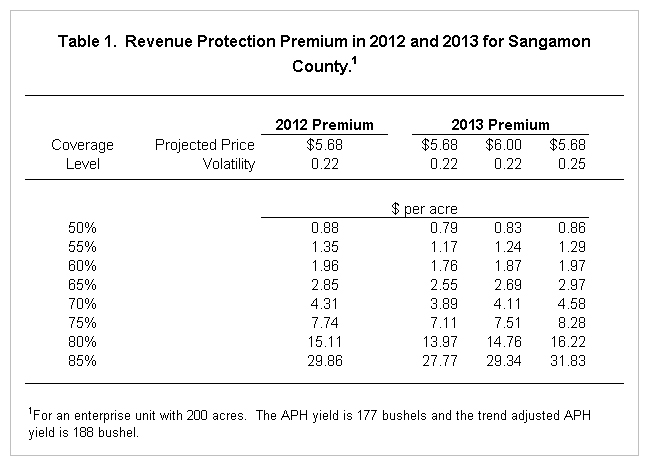 For an 85% RP policy at the enterprise level in Sangamon County, RP premiums in 2013 will be 7% less than in 2012, given the same projected price and volatility in 2013 as in 2012. Changes in premium will vary around Illinois, as Illustrated in Figure 1. The largest reductions tend to occur in the central-western portion of the state. The counties with the largest reductions are Mason County (-12%) and Calhoun County (-11%). Six counties have 10% reductions: Bond, Brown, Fulton, Green, Schuyler, and Scott Counties. Several counties in southern Illinois have increases. The counties with the largest increase are Wayne (13%0, Gallatin (12%), and Hamilton (11%) counties. 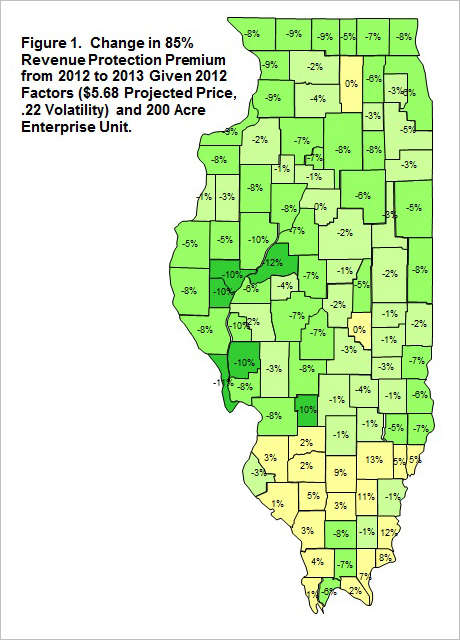 Reductions also will vary across products. Yield Projection (YP) will have larger reductions compared to RP. For example, the YP policy comparable to the above described RP policy for Sangamon County (85% coverage level, 200 acre enterprise unit) has a projected 2013 premium that is 20 below the 2012 premium. This compares to a 7 percent reduction for the RP policy.

Crop insurance premiums can be generated with the 2013 Crop Insurance Decision Tool, a Microsoft Excel spreadsheet available for download from the from the FAST section and Crop Insurance section of farmdoc. A screen shoot of the Premium Calculator tool is shown below. This spreadsheet will generate corn, soybean, wheat, and other crop premiums for most states in the eastern United States and in the Great Plains. The spreadsheet also has other tools, such as a what-if tool for evaluating crop insurance purchases. 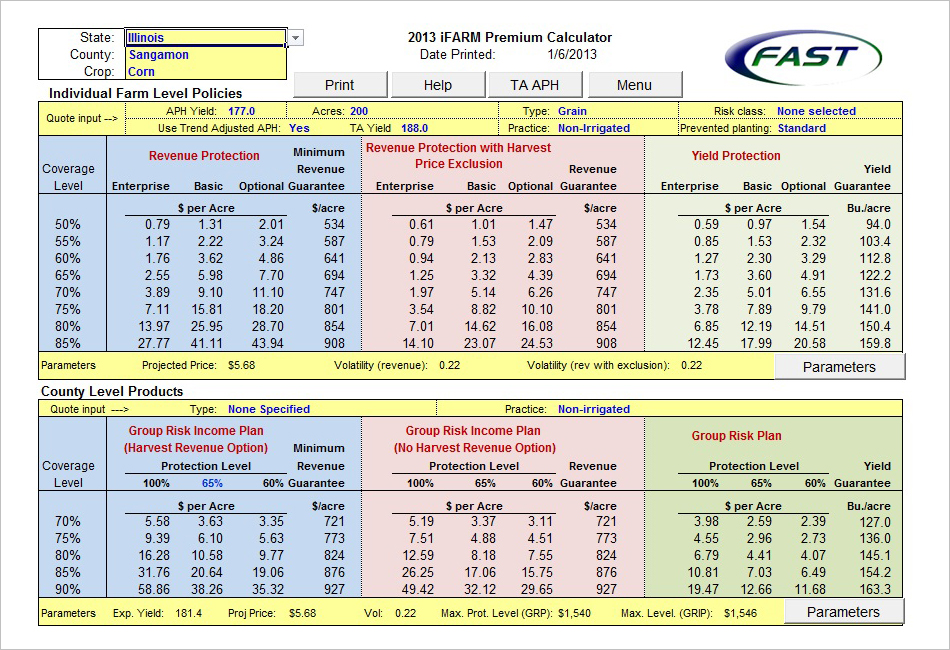