We began a discussion of the potential domestic blend wall for ethanol in a post in May of last year. The issue remains important for the biofuels industry, regulators, and policy makers. Domestic ethanol consumption is almost entirely in the form of low level blends with gasoline capped at 10 percent (E10), although small amounts have been consumed in “flex fuel” vehicles as an 85 percent blend (E85) and very small quantities are being consumed as a 15 percent blend (E15). With blending dominated by E10, the blend wall is reached when the ethanol inclusion rate reaches 10 percent of domestic motor gasoline consumption. The blend wall can be problematic since the federal Renewable Fuels Standards (RFS) require increasing quantities of renewable (ethanol) biofuels consumption for the next three years. Those requirements exceed the expected E10 blend wall (Figure 1). 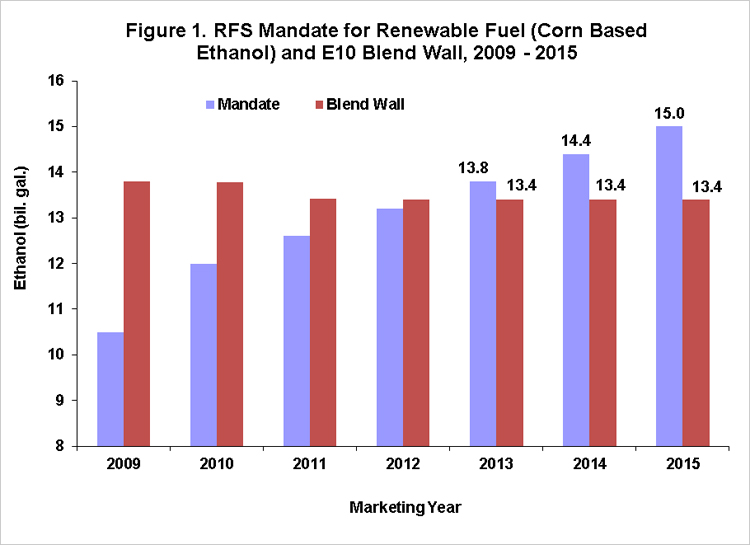 There are also two ways to expand the blend wall itself:

E85 may offer a partial solution for expanding the ethanol blend wall. E85 has been in the market for a number of years and there are currently a number of fueling stations for E85. The U.S. Department of Energy (DOE) estimates that number at 2,311, although this private source estimates the number at 3,043 stations in 2,043 cities. Based on these estimates, 2 to 2.5 percent of the fuel stations in the U.S. offer E85. Analysis by the DOE suggests that the current retail infrastructure could support E85 use of 600 million gallons annually compared to the current consumption of approximately 125 million gallons. Applying the DOE analysis to the private estimate of the number of E85 fueling stations would increase that estimate from 600 million gallons to 790 million gallons. The EPA also estimates that there are over 10 million flex fuel vehicles in service presently in the U.S. At average annual driving distances, that number is sufficient to consume several billion gallons of E85 annually.

With some additional fueling capacity, it might be feasible to consume 800 to 900 million gallons of E85 annually, which would expand the ethanol blend wall to about 14.2 to 14.3 billion gallons with no increase in total fuel consumption and no significant consumption of E15. Depending on the amount of Brazilian ethanol imports (which displaces domestic ethanol under a blend wall constraint) that would be close to meeting the RFS for renewable biofuels through 2014. The RFS for 2015, however, rises to 15 billion gallons.

It appears that current infrastructure would support a substantial increase in the consumption of E85, perhaps upwards of a billion gallons annually in the next year or two. While the infrastructure is in place for such a sharp increase in E85 consumption the big unknown is the price discount that would be required to induce U.S. motorists to start using E85 in such large quantities. According to this website, E85 has been priced about 5 to 15 percent lower than regular gasoline in recent years. This has clearly not been a large enough discount to encourage much E85 consumption. So, what discount is likely to be needed? To start, a gallon of E85 provides about 75 percent of the energy value of a gallon of gasoline, so drivers will experience around a 25 percent drop in fuel mileage compared to regular gasoline. In addition, the lower fuel mileage means more frequent refueling stops and the attendant opportunity cost that consumers place on that time. There is no hard evidence yet on the exact discount that consumers may require in light of these facts, but 25 percent is a reasonable starting point.

With this background, we can make some simple projections based on current prices. On Thursday, January 24th the wholesale ethanol price in Chicago was $2.37 per gallon and the wholesale gasoline price was $2.65. So, ethanol was trading at about 89 percent of the price of gasoline. That means the wholesale acquisition cost of a gallon of E85 should be about $2.41 (0.85 X 2.37 + 0.15 X 2.65). We can then compare this cost to the price of gasoline to find the implied discount in today’s market. That ratio is 91 percent, implying a somewhere larger discount (9%) of E85 pump prices relative to regular gasoline than actually occurred in the first three weeks of January 2013 (6% according to e85prices.com). If a 25 percent discount is needed to encourage large E85 consumption, then the wholesale price of E85 in this example would have to fall to $2.00 ($2.65 x 0.75). This raises the possibility of blenders experiencing large losses on E85 sales because in this example blenders would be acquiring ethanol at 91 percent of the price of gasoline but only selling it for 75 percent. Of course, this could also put substantial downward pressure on ethanol prices, depending on ethanol production margins.

In sum, current pricing relationships do not appear to allow E85 to be competitive in the fuel market and provide positive blending margins. As a result we do not expect much expansion of E85 consumption in the near term unless:

From a policy perspective, this analysis is an important component of the continuing story surrounding the challenges of implementing the RFS mandates. At the present time, without widespread E15 adoption and/or changes to RFS rules, there appears to be no pathway to implementing the RFS mandates beyond 2013 without some market participants incurring substantial economic losses.