Congress passed the American Taxpayer Relief Act of 2012 (ATRA) on January 1, 2013 and with President Obama’s signature the following day, ATRA ushered in broad new tax laws for 2013 onward. While ATRA’s tax changes are extensive and many of these changes will affect farmers, this article will point out the changes that may have the most impact on the farmer’s income tax bill.

One major change ATRA brings for 2013 and subsequent years is a new top tax bracket. The new bracket applies to income above $400,000 (for farmers filing as single) or $450,000 (for married farmers filing jointly). The new tax rate on income in the new top bracket is 39.6%.

Farmers with incomes below the $400,000 or $450,000 thresholds are not affected by this change, since ATRA did not make any changes to the lower tax brackets.

While the new top tax bracket is a major ATRA change, there are some other additional ATRA changes that will affect the farmer’s tax liability each year from 2013 onward.

Through 2009, higher-income farmers frequently saw their itemized deductions reduced because their income was high enough to trigger a limitation formula. This meant a higher tax bill for the year. After a three-year hiatus, ATRA brings this limit on itemized deductions back into effect for higher-income farmers for 2013 and subsequent years. The limitation affects farmers with adjusted gross income (AGI) over a threshold amount ($250,000 for farmers filing single or $300,000 for farmers filing jointly).

Generally, farmers affected by this rule will have their itemized deductions reduced by 3% of the amount by which AGI exceeds the threshold amount. The reduction is subject to a “cap” that is part of the formula which is triggered if the farmer’s income is high enough.

Example 1. Lisa is a single farmer with 2013 net Schedule F income in the amount of $600,000, which is also the amount of her AGI. She also has $33,000 of allowable itemized deductions, comprised of her charitable contributions, mortgage interest and $3,000 of medical expenses. Because her income is over the $250,000 threshold for single filers, she will have reduced tax benefit from her itemized deductions.

iii. A Return to the Personal Exemption Phaseout

The Impact of ATRA

ATRA has many provisions that may have an effect on a farmer’s income tax liability each year beginning with 2013 but the following example illustrates the impact of those changes discussed above.

Example 3. Brett is a single farmer with $600,000 of Schedule F net income for 2013. During 2013, he sold some farmland and has a long term capital gain in the amount of $800,000 from the sale. In addition, he has $60,000 in itemized deductions comprised of deductible interest and charitable donations). In the earlier discussion regarding ATRA tax bracket changes, the new ATRA tax brackets and the “non-ATRA” brackets (which would have prevailed for 2013 without the ATRA legislation) were presented. This allows some comparative “ATRA vs. non-ATRA” tax calculations to be made to determine the impact of these changes on Brett’s tax liability for 2013. The following table compares the highlights of the detailed tax calculations for Brett. 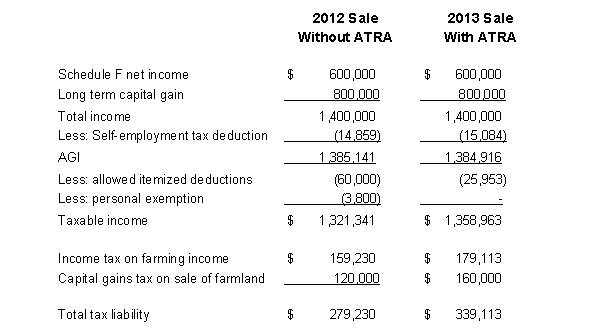 Because of the impact of the ATRA changes discussed, Brett will pay an additional $59,883 in taxes for 2013. This increased tax liability is due to the following ATRA changes:

Effective January 1, 2013, two new Medicare taxes may affect the farmer’s overall tax liability too. These Medicare taxes are not attributable to ATRA but came into effect for 2013 as a result of the Affordable Care Act which passed into law in March, 2010. Generally, these two new taxes may affect farmers with modified adjusted gross income over the threshold amount of $200,000 ($250,000 for farmers filing jointly). Briefly, these two new Medicare taxes can be summarized as follows:

Moreover, the additional 0.9% Medicare tax will apply on the farmer’s net farming income that falls above the threshold.

Example 4. Use the same facts as Example 3. The farmland that Brett sold was not land that Brett actively farmed but was land that he held for investment purposes. Brett does not meet the “material participation” requirement and the sale is considered to be the sale of property from a passive activity. Brett will have additional tax liability as a result of the 3.8% Medicare tax on net investment income on the $800,000 of net long term capital gain. Under the rules for the new 3.8% Medicare tax on net investment income, the entire $800,000 of capital gain is subject to the tax. His additional tax liability on the sale is $30,400 (3.8% × $800,000).

Moreover, Brett’s net farming income in the amount of $600,000 shown on Schedule F is in excess of the $200,000 threshold. Brett will owe additional Medicare tax on his adjusted self-employment income in excess of the $200,000 threshold. The amount of Brett’s self-employment income subject to the new Medicare tax is calculated as follows.

ATRA consists of many changes that may increase a farmer’s tax liability for 2013 onward. Higher-income farmers are primarily affected. In addition, the new rules may increase tax liability on farming activity income as well as the farmer’s tax liability on capital gains. The two new Medicare taxes (one that applies to earned income and one that applies to investment income, such as capital gains) may further increase the farmers tax liability in addition to those increases attributable to ATRA. Farmers should consult their tax advisor on the best strategies to minimize the impact of these new tax rules that become effective in 2013.