Cattle feeders have witnessed record fed cattle prices over the past few years. But they also have experienced record prices for feed and feeder cattle, resulting in record feeding losses that at times exceeded $200 per head for Corn Belt cattle feeders (Figure 1). This has occurred despite the fact that cattle supplies have been declining for several years. The USDA cattle inventory in January reported the lowest beef cow numbers since 1962 and the smallest calf crop since 1949 (Figure 2).

The size of the calf crop dictates the number of cattle available for slaughter, and many observers concluded that lower cattle numbers would translate into sharply higher prices for fed cattle and a return to cattle feeding profitability. These conclusions turned out to be overly optimistic, in part because the impact of lower slaughter numbers has been offset by heavier carcass weights (Figure 3), with the end result that beef production has remained relatively steady.

The other factor keeping a damper on cattle prices has been consumer demand. The combined effects of heavy personal debt loads, volatile energy prices, high unemployment and an uncertain economic outlook have kept US consumers cautious and limited spending on beef. In addition, competition from increasing supplies of and ample quantities of pork look have had an effect, as have weaker foreign currencies that reduce the buying power of overseas customers. 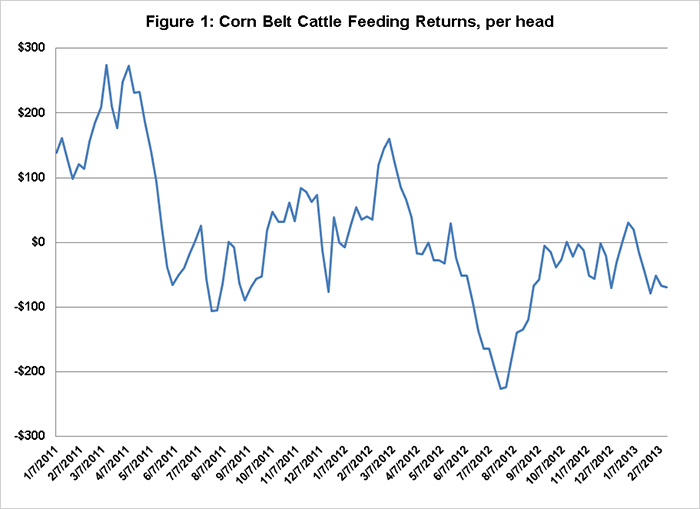 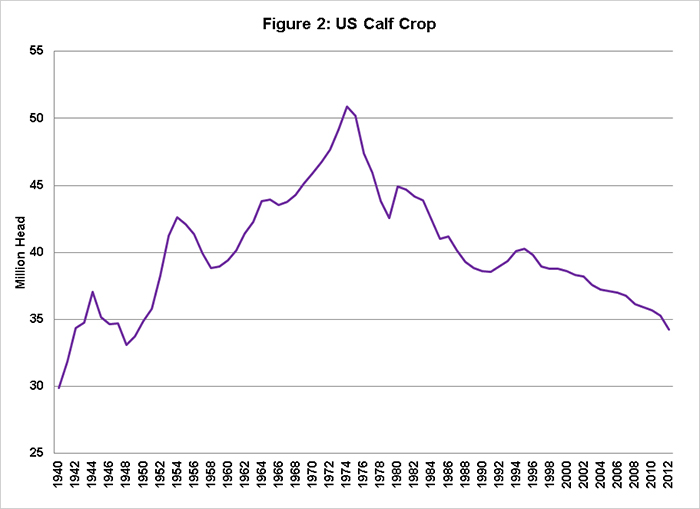 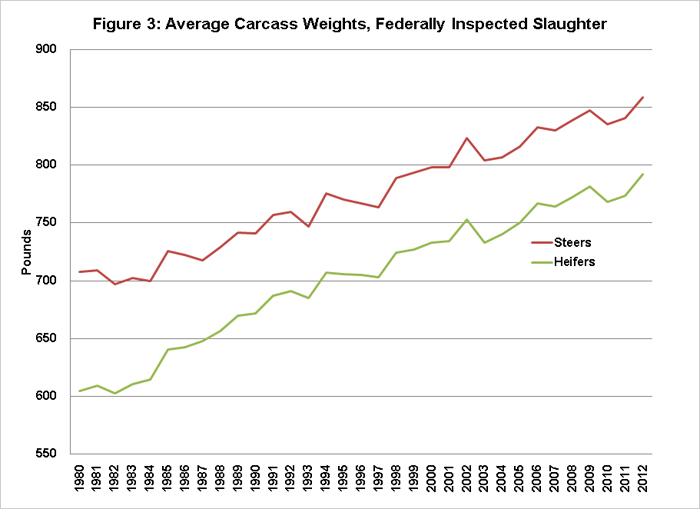 Higher prices for fed cattle will require higher beef prices, so a rebound in the US economy will be essential in making this happen. But the most improvement in cattle feeding profitability could come from lower feed prices, particularly corn. The futures market is expecting normal yields and a big crop for 2013, so new-crop prices are trading in the mid-$5 area. In addition, each old-crop month is progressively lower than the preceding month, with September more than a dollar below the July contract. Local cash prices should exhibit the same general pattern, and this price structure gives feeders a strong incentive to rely on hand-to-mouth purchases until the 2013 crop is available.

Another point worth noting is that despite the lower cattle numbers, feeder cattle futures are currently near life-of-contract lows. Apparently the feeder cattle market is discounting the possibility of a large corn crop at this point in the production cycle, and is waiting until yields are assured, or at least the crop is in the ground, to reflect the possibility of lower corn prices. This situation may provide cattle feeders with some profitable forward contracting or hedging opportunities on expected purchases of feeder cattle.

In summary, cattle feeders are encouraged to consider total returns for the cattle feeding enterprise, rather than focus on expected prices for a single commodity, when making future production decisions.