In 2007, the Energy Independence and Security Act (EISA)i revised the federal renewable fuel standard (RFS2), by expanding, among other requirements, the mandate for next-generation ethanol.ii The Environmental Protection Agency (EPA) oversees implementation of RFS2, including approval of biofuel pathway petitions for new feedstocks such as camelina (Camelina sativa) oil and energy cane (generally a hybrid of Saccharum officinarum and Saccharum spontaneum, but other hybrids have been used such as Saccharum barberi and Saccharum sinense, in the development of new cultivars).iii To date, EPA has approved 10 of the 42 petitions it has received for new biofuel pathway determinations, with an average waiting time of 1.37 years.

Under the RFS2 pathways process, EPA assess biofuels based upon an energy balance equation that considers a biofuel’s feedstock, process, and type of fuel produced.iv EPA requires that if a particular fuel type, process, or feedstock varies significantly from any of the already modeled pathways found in the regulations, then companies seeking to develop biofuel through non-modeled pathways must petition EPA to determine the energy balance of that biofuel production process.v Before conducting an assessment of the new pathway, EPA also will consider how close the new pathway is to actual production.vi Based upon priority, EPA will then determine the energy balance of the new fuel, feedstock or process, and assign it an applicable D-code that categorizes the biofuel as renewable, advanced, cellulosic or biodiesel.vii The D-code assignment allows producers of the biofuel, using approved pathways, to generate Renewable Identification Numbers (RINs) to a batch of biofuel, for the purpose of tracking its production, use, and trading.viii

Although Congress passed EISA in 2007, RFS2 regulations did not officially take effect until July 1, 2010.ix Since RFS2’s implementation, 42 companies have petitioned EPA for approval of their non-modeled pathway.x (See figure 1.) Interestingly, only 10 companies have actually received a disposition on their petition, less than 25 percent.xi (See figures 1 and 2.) The average waiting time without a disposition on a biofuel producer’s pathway petition to EPA exceeds more than 1.37 years.xii The longest pending petition has been sitting in limbo for almost three and a half years, while the shortest timeframe for a pathway approval was less than 60 days. (Figure 2.) The average wait time for a company that has been approved for a new biofuel pathway has been 290 days. For those companies that are still waiting for a determination from EPA, however, the average wait time exceeds 570 days – nearly twice as long.

Thus far the following pathways have been approved by EPA, in order of approval: 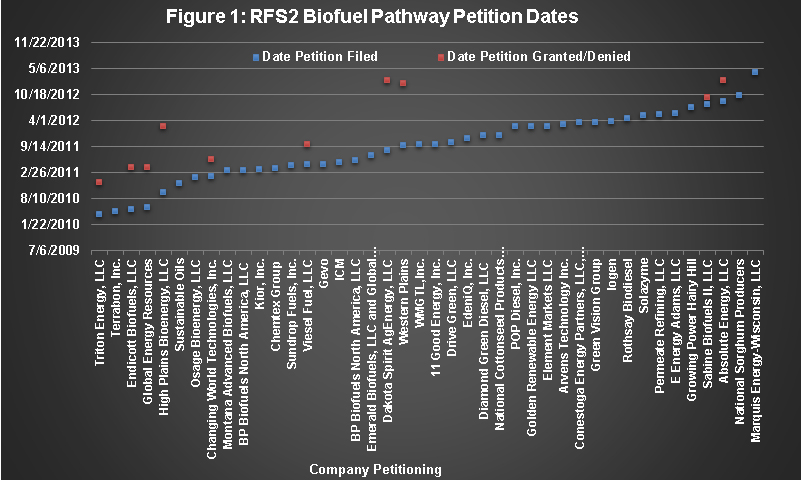 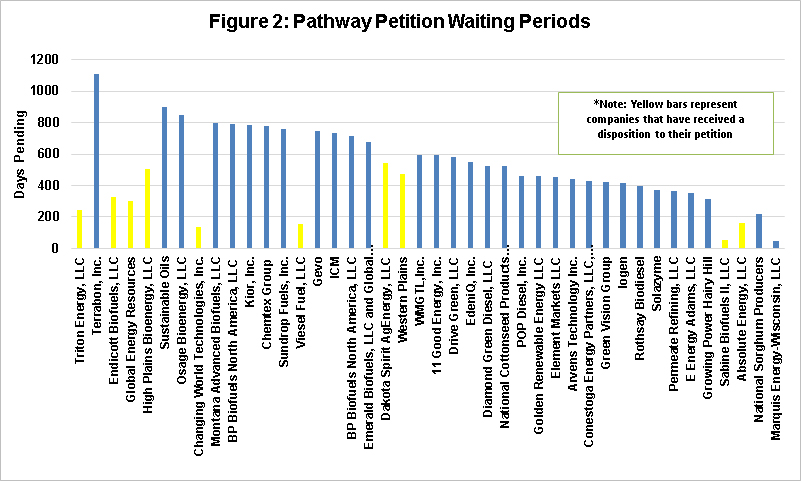 The length of time between filing of the petition and final determination suggests that there may be a lack of transparency and clarity of the data EPA needs to conduct its assessment, especially for petitions involving substances or processes other than biodiesel or corn ethanol. For example, in their rulemaking procedures it is clear that EPA does not formally address feedstock invasiveness,xiii which for at least one company stands as a direct impediment to their pending biofuel pathway petition.xiv As EPA continues to move forward with implementing RFS2, it is essential that the agency develops clear guidance on the pathway approval process, including procedures to address relevant matters outside the GHG balance equation, such as invasiveness. Minimizing these regulatory hurdles through increased transparency could better enable the nascent advanced biofuel industry to meet the RFS2 mandates.