This post is the first in a series that will examine big picture issues that frame U.S. farm safety net policy. Impetus for the series is the recent rejection by the U.S. House of Representatives of the proposed 2013 Farm Bill. While spending on food nutrition programs was a key issue, both the proposed spending and structure of the farm safety net impacted at least some, maybe many, votes. Thus, the decision by the House of Representatives suggests the U.S. is now fully engaged in a major debate about the future of its farm safety net. These types of debates are more about the big policy picture than about specific policy parameters, such as the level of target prices. This post specifically examines the issue of farm income relative to the income for the rest of the U.S. 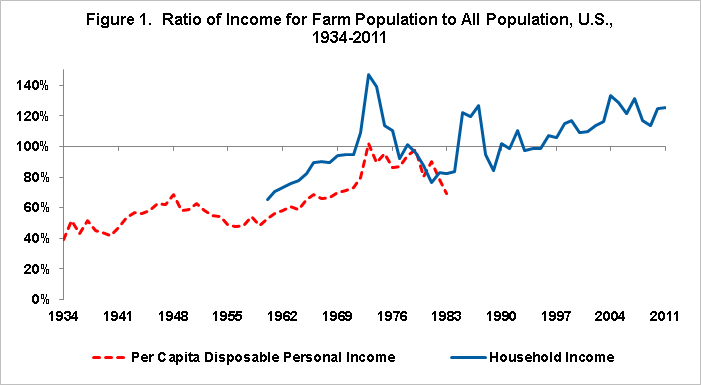 Caution is always in order when conducting a comparison over time and when comparing across different data sets. Nevertheless, the trend is so strong that it is difficult to argue that farm income is not substantially higher relative to nonfarm income now than when farm programs began in 1933. This historical perspective is relevant for the current debate because farm programs were adopted in part as a response to the poverty of the U.S. farm population, which was 25% of U.S. population in 1930. Critics of farm policy commonly mention this historical change in relative economic status.

The increase in farm income relative to nonfarm income is the result of many factors, but two stand out. One is the increasing size of the farm production unit, which in turn is partially driven by technology. The second is the increasing role of nonfarm income (also referred to as off-farm income). Figure 2 is a companion to Figure 1, specifically presenting the ratio of the income of the farm population (or households) that comes from farm sources. Nonfarm income comes from varied sources. The majority are wages and salaries from off-farm jobs, followed by transfers, such as Social Security, and income from nonfarm businesses. Farm income provided over 60% of per capita income of the U.S. farm population in the 1940s and 1950s. In contrast, farm income has provided less than 15% of all income of farm households in recent years, even including the farm prosperity years since 2005. 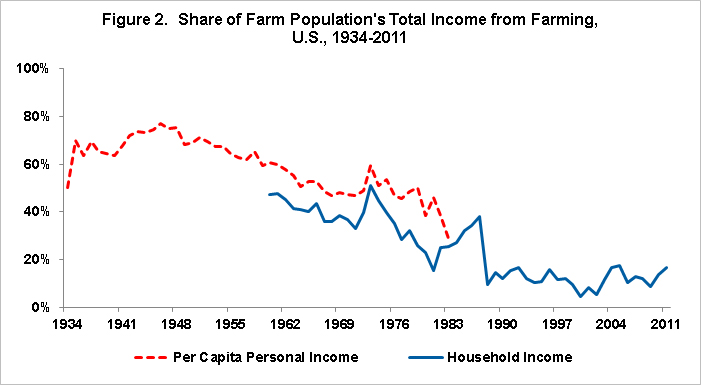 It is commonly pointed out that an increasingly small share of the U.S. population has any tie to farming, including through grandparents and friends. A related issue is the ability of the nonfarm population to relate to the size of a modern farm. Figures 4 and 5 are an attempt to illustrate how this consideration has changed over the last half century. It is the comparison of these two figures, not the individual figures that matter.

There is nothing novel in this discussion. Farm household income has increased relative to nonfarm household income. Key reasons for this increase are the increasing role of nonfarm income and the increasing size of farms. Non-farmers have an increasingly hard time relating to the larger size of farms. Each of these considerations influences the willingness of the non-farm population to support the farm safety net. However, these trends are not new. Thus, it appears that, either individually or in combination, they have not been a compelling set of reasons to substantially reduce or eliminate spending on the U.S. farm safety net.

However, their influence may be changing. The U.S. is currently engaged in updating its safety net. The key update is the extension of access to medical care to the general U.S. citizenry. This decision, which culminates a long run trend toward increasing access to medical care, is an expensive government program. There are 3 options for paying for it: increased government revenues, reducing the cost of existing medical services, and reducing spending on other government items. The answer will likely be a combination of all three. The size of the redistribution of spending from other government items to medical care will depend on the growth rate of the U.S. economy and the cost savings achieved in existing medical services.