In this post, returns are compared on southern Illinois farms that grew and did not grow wheat. Specific comparisons are for farms growing and not growing wheat, farms having double-crop soybeans following wheat, and farms having different percent of their acres in wheat. These comparisons are made for years from 2006 through 2012, corresponding to the period of higher commodity prices. Overall, comparisons suggest that farms growing wheat had comparable profitability to those farms that did not grow wheat.

Farms Included in the Study

Data from farms enrolled in Illinois Farm Business Farm Management (FBFM) were summarized for this post. To be included in this study, a farm had to meet certain criteria:

Operator and farmland returns were used to make comparisons. Operator and land returns equal gross revenue minus non-land costs. Not included are non-land costs such as property taxes and mortgage interest payments on owned farmland, cash rent on cash rented farmland, and share rent distributions on share rented farmland. Farms differ in ownership and renting structure; hence, land costs will vary across farms. Not including land costs causes ownership and tenure differences to not be reflected in the data.

Operator and farmland returns are summarized below for the following divisions of farms: 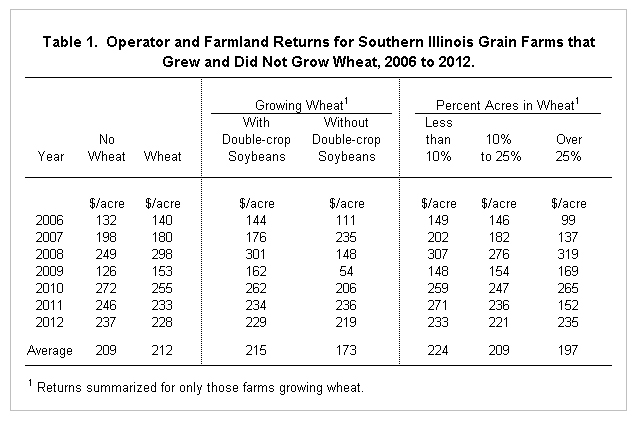 Overall, these comparisons suggest that wheat remained a viable crop in southern Illinois farms over the 2006 through 2012 time frame.