In a post on July 19th of this year we examined the reasons for RINs prices that were “going wild” at the time. We showed that if the RFS renewable (ethanol) mandate exceeds the E10 blendwall then the gap effectively becomes an additional biodiesel mandate due to the nesting provisions of the Renewable Fuels Standard (RFS). Since D6 ethanol RINs are valued as D4 biodiesel RINs in this circumstance, we argued that if one wanted to understand the pricing of ethanol RINs one had to dig into pricing in the biodiesel market. We showed that biodiesel prices had been on a tear relative to diesel prices through mid-July and this was the reason that all RINs prices had been surging. In today’s post we explore the impact of the surging biodiesel prices on the profitability of biodiesel production. 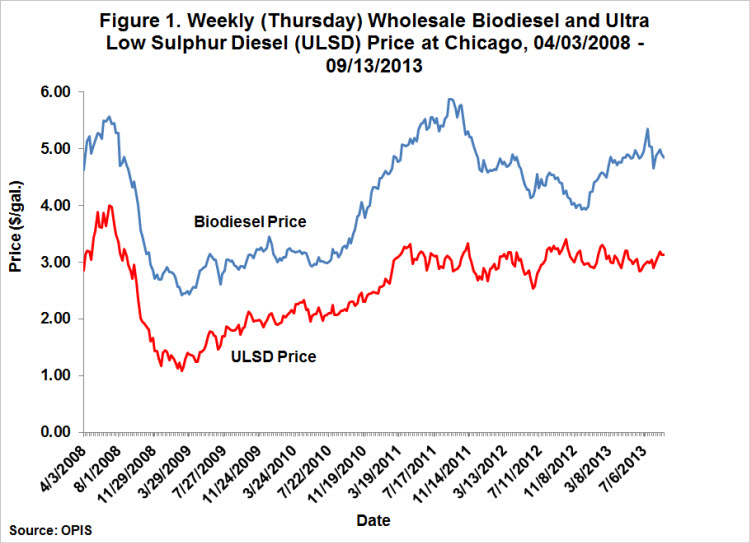 In order to assess biodiesel production profitability over time, we use a model of a representative Iowa plant developed at Iowa State University by Don Hofstrand. The model incorporates these key assumptions:

This model is meant to be representative of an “average” plant constructed since 2007 to process soybean oil into biodiesel. There is certainly substantial variation in capacity, production efficiency, and feedstock across the industry and this should be kept in mind when viewing profit estimates from the model. However, limiting the feedstock to soybean oil is reasonable since it represents about 60 percent of all feedstock used to produce biodiesel in the U.S.

To track plant profitability over time, weekly biodiesel and soybean oil prices at Iowa plants from the Agricultural Marketing Service (AMS) were collected starting in 2008. Natural gas costs are estimated based on monthly data from the Energy Information Agency (EIA). Glycerin and methanol prices were obtained from OPIS. Figure 2 presents the (pre-tax) estimates of biodiesel processing margins based on the prices and model assumptions. Profits net of all variable and fixed costs have been essentially zero except for two spikes. The first spike occurred in March – December 2011 and is directly attributable to the race by diesel blenders to take advantage of the blender tax credit that was set to expire at the end of 2011. The second and current spike started in January 2013. There are likely two explanations for the current spike. First, diesel blenders once again are motivated to incentivize an increase in the production of biodiesel during 2013 to take advantage of the blenders tax credit that was reinstated for this year only. It is uncertain whether it will be extended for 2014. Second, the biodiesel mandate under the RFS was expanded by the EPA from 1 billion gallons in 2012 to 1.28 billion gallons in 2013 and there may be a need for additional production above the mandate in 2013 in order to meet parts of the advanced and renewable mandates (the latter was discussed above). 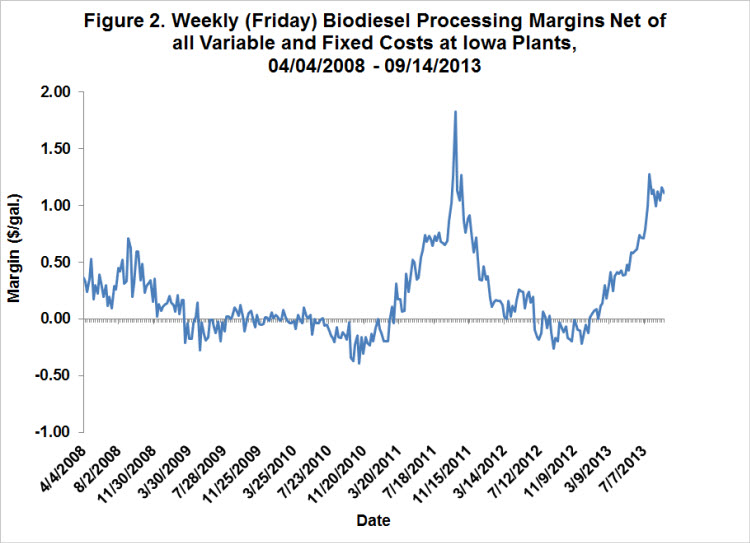 We now examine biodiesel prices and production profits together. This is done in Figure 3, which presents the biodiesel price at Iowa plants (slightly different price series than the Chicago price series in Figure 1) and a simple version of the breakeven profit relationship between soybean oil and biodiesel prices. Since soybean oil represents over 80 percent of the variable operating costs of the representative plant, all other costs are lumped into the constant term of 0.60, or 60 cents per gallon of biodiesel produced. The 7.55 slope is just the number of pounds of soybean oil required to produce a gallon of biodiesel. One can readily observe that the line for the breakeven relationship tracks the biodiesel price very closely except for the two episodes outlined above. This is just another way of saying that the market has typically priced biodiesel based on the cost of soybean oil, a markup for other variable and fixed costs, and zero profits. Another implication is that the prices of biodiesel and soybean oil track one another very closely outside of the previously mentioned periods in 2011 and 2013. 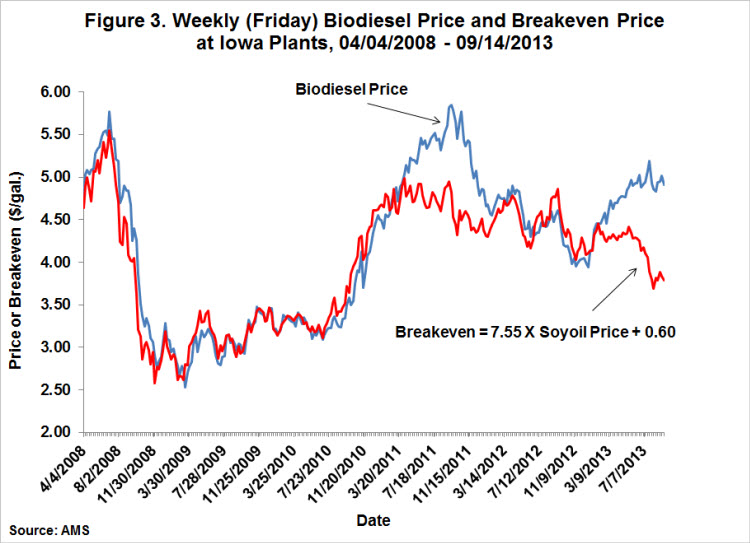 The biodiesel market is now playing an important role in determining the price of RINs. Diesel blenders have bid up the price of biodiesel since the beginning of the year substantially in relation to the price of soybean oil, the main feedstock used to make biodiesel in the U.S. In combination with falling soybean oil prices this has driven biodiesel production profits to levels rarely seen in recent years. In a future post we will take a look at the impact of the rising profits on the quantity of biodiesel produced. The response of supply to prices and profits is an important piece of information in light of the potential role of biodiesel in meeting RFS mandates in the future.