Economists pay as much attention to price ratios as to the level of prices. Within the U.S. crop sector, the price ratio that arguably receives the most attention is the ratio of soybean to corn prices. The emergence of a late season drought in much of the Midwest has the potential to make this price ratio of more relevance than normal this year because a late season drought normally affects soybean production more than corn production. Characteristics of the soybean – corn price ratio are examined in this post. The focus is on both the ratio’s historical trend and annual variation.

The price ratio is examined beginning with the 1975 marketing year. The primary reason for this decision is that, prior to 1973, U.S. farm policy was an on-going, important determinant of prices. The corn and soybean prices used in the analysis are from the U.S. Department of Agriculture (USDA), National Agricultural Statistical Service (NASS) Quick Stats program, available here. 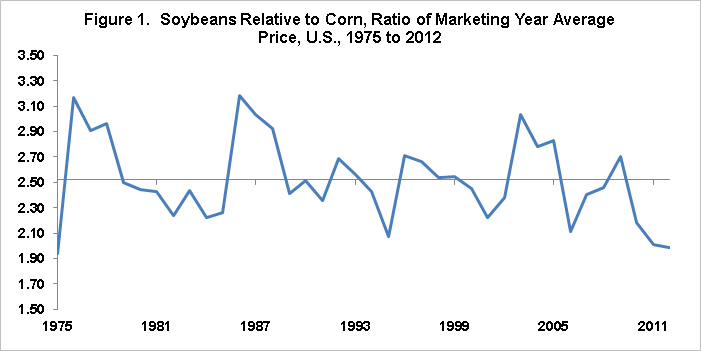 To put the historical variation observed in the soybean-corn price ratio in a more contemporary context, Figure 2 presents the range of soybeans prices for the current 2013 marketing year given the 2013 midpoint price estimate of $4.90 for corn contained in USDA’s August 2013 World Agricultural Supply and Demand Estimates (WASDE). The implied price of soybeans ranges from $9.49 using the lowest observed price ratio of 1.94 to $15.61 using the highest observed price ratio of 3.19. The average price ratio of 2.52 implies a soybean price of $12.34, with a 67% confidence range of $10.73 to $13.95 based on the standard deviation of 0.33 in the price ratio. 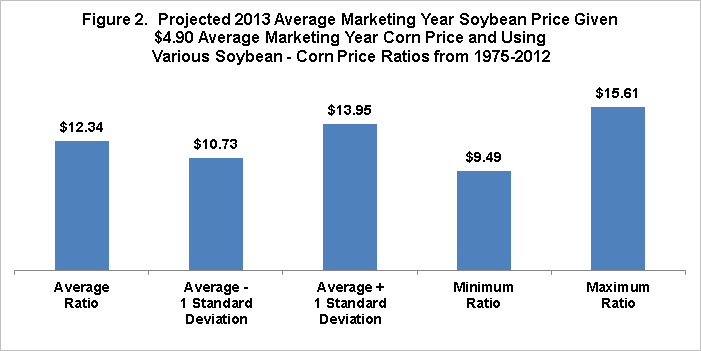 The current price ratio based on the average of all 2013 marketing year corn and soybean futures contracts is 2.75. In contrast, the August WASDE ratio was 2.32 using the midpoint price estimate. This change in price ratios is consistent with the emergence of a late season drought expected to have a greater impact on soybean production than on corn production.

The large variation in the annual soybean-corn price ratio prompts an immediate question: what explains the variation? Time constraints did not permit an extensive investigation, but one obvious potential explanatory factor is the ratio of U.S. production of soybeans to corn, measured in bushels. This ratio is presented in Figure 3. Source of the production data is USDA’s Quick Stats program. 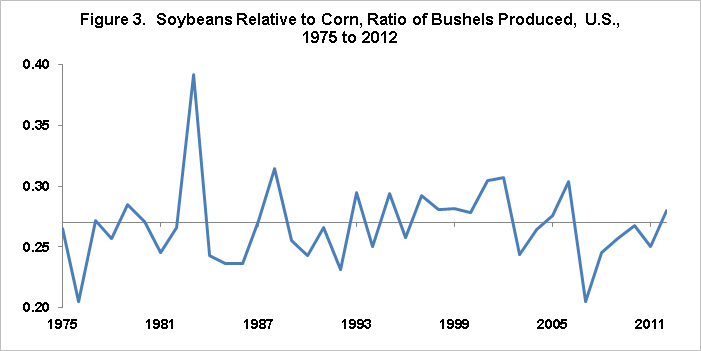 As with the price ratio, there is no apparent trend in the ratio of U.S. soybean to corn production since 1975. The average ratio is 0.27, which means that soybean production is on average 27% of the size of corn production in the U.S. The ratio ranges from 0.20 in 1976 to 0.39 in 1983. The latter year was the year of the payment-in-kind (PIK) farm acreage reduction program that coincided with a severe drought. Soybeans never have had an acreage reduction program and thus was largely unaffected by the PIK program. Excluding 1983, the next highest soybean-corn production ratio was 0.31, which occurred in both 1988 and 2002.

Interestingly, the correlation between the annual soybean-corn price ratio and the annual soybean-corn production ratio is -0.20, which is not statistically significant at the commonly-used 95% confidence level. This finding does not rule out U.S. production as a contributing determinant of the soybean-corn price ratio, but it does suggest that other factors have played a more important role historically. Other factors include the relative strength of demand for soybeans and corn and the world-wide supply of soybeans and corn. Additional analysis is needed.

A key price ratio for the U.S. crop sector is the ratio of soybean to corn prices. This ratio has importance because soybeans and corn are not only the largest acreage crops in the U.S. but are also crops that often compete for the same acre of land. Understanding this ratio is important to understanding market prices. Despite all the changes in the supply and demand complex since 1975, the ratio of soybean to corn prices exhibits no discernible trend. However, the ratio does exhibit considerable variation from year to year and over longer periods of time.