For farmland that is cash rented near average rent levels, break-even corn prices have increased from $1.67 per bushel in 2004 to the mid-$4.00 range in 2013 and 2014. Mid-$4.00 break-even prices will cause losses when corn prices are in the in the low-$4 range or below. There are good possibilities of prices being below break-even prices over the next several years.

Break-even prices were calculated by adding per acre non-land costs and cash rent together, and then subtracting government payments and crop insurance proceeds. This per acre break-even value gives the amount of crop revenue necessary to break-even. For northern Illinois in 2014, non-land costs are projected at $565 per acre, average cash rent at $264 per acre, and there are no government payments or crop insurance proceeds projected for 2014. This gives $829 of crop revenue ($565 non-land costs + $264 cash rent) that must be obtained to break-even in 2014. Given a 187 bushel per acre expected yield, the break-even price is $4.43 per bushel ($829 crop revenue / 187 bushel yield). 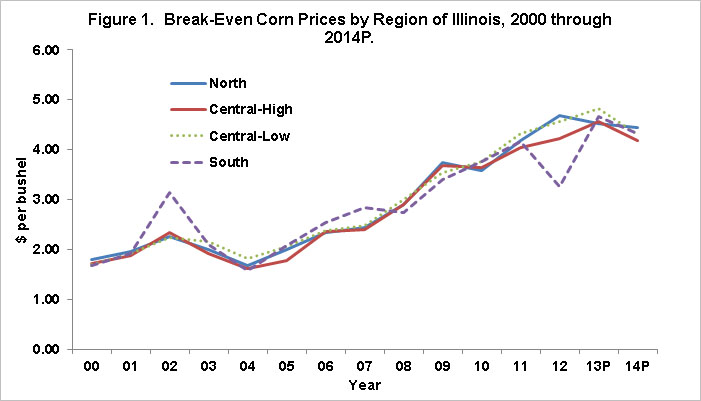