The Illinois Farmland Assessment statutes were designed with the intent to base property tax assessments of agricultural property on income derived from agricultural use, rather than on market values.  The methods were developed in the early 1980s using best available data and practices for measuring income potential across a wide range of agricultural practices and conditions.  To limit variability through time and across management differences unrelated to income potential of the underlying assets, the income measures were smoothed across time, and subjected to limits in change from year to year of 10% of the previous year’s corresponding value.  Importantly, all 50 states use some form of use-value assessment for agricultural land (Anderson, 2012).  The specific approach used in Illinois is generally comparable with approaches used in most other Midwestern states for ag-use valuation, though differences in specific methods do exist from state to state.  However, the principle remains that assessed values are intended to reflect a capitalized value of the income potential that the land represent in agricultural use and not the market value which might reflect expectations of future growth and or conversion potential for example.

The Economic Development Act of 2013 that went into effect in July of 2013 contains a modification to the language defining the limit to the permitted change in the certified assessed value from one year to the next.   Specifically, the underlined portions of the following text were inserted into the law:

The steps involved in calculating the assessed value for farmland are conceptually straightforward, involving the following steps:

Prior to the enactment of the new law, the maximum change was compared to its own prior value and the certified value at a PI point not allowed to deviate from its previous year’s value by more than 10% of the previous year’s value, notwithstanding the casual interpretation of the limit of a 10% change.  The plain language used to limit the movement to “no more than 10% of the previous certified value” did not contemplate the issue that would arise from applications of 10% to certified values that were nearly zero.  Importantly, percentage changes when applied in the fashion described are not symmetric – a 10 percent reduction followed by a 10 percent increase results in a 1% decline.  This effect was particularly pronounced near the lower end of the PI scale and during a period of time when the definition of “income potential” was particularly impacted by changed in farm programs.   More bluntly, once a certified EAV value was established near zero or a low number, the 10% limitation became unintentionally binding for a series of years.  Conversely, at higher points on the PI scale, as farm incomes increased, the variations allowed by 10% limits on far larger numbers could result in year to year variations that were extreme by historic norms, and didn’t really represent a “smoothing” control anymore.  The graphic below shows the resulting channel that developed through time with limitations on annual movements of roughly $1.50/year for low PI soils up to assessment movement of $65/year for higher PI soils. 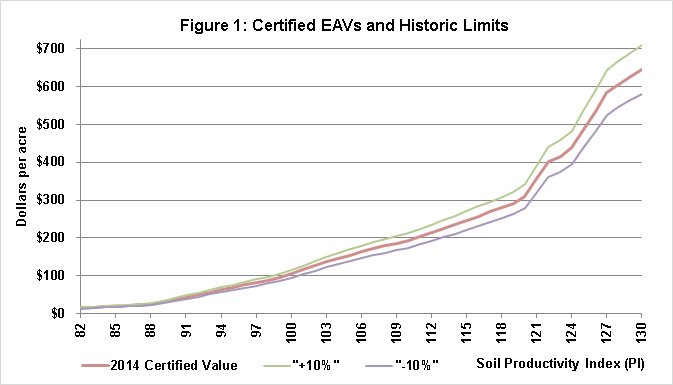 In some sense, you can think of the base EAV line as being the “target” if there were no other constraints in the system.  Importantly, it is a scaled version of income and relative EAVs are strictly proportional to income as stated and intended in the law.  Currently, base EAVs range from approximately $590 to $1,220 per acre from PIs of 82 to 130 respectively.  These values represent considerably lower ag-use values than current market values.  It is also important to note that he impact of the discount rate has been tremendous through time – if for example, you consider that a 10% discount rate results in an income multiple of 10 and a 5% rate results in an income multiple of 20, you realize that much of the upward movement is due to the reduction in the rates that have followed the recent past yield curves.  Identical changes in income, capitalization rate, non-land expense or resulting gross each should have identical impacts on EAV regardless of the location on the PI scale.  In other words, one more dollar of income resulting from any change in the inputs would be capitalized into the same change in EAV.  Low PI soils have lower base incomes, and thus are assessed proportionally lower based on the construction of the gross and associated differences in nonland costs. The figure below shows the impact of the changing 2032a rate through time via the implied income multiplier associated with the rate. 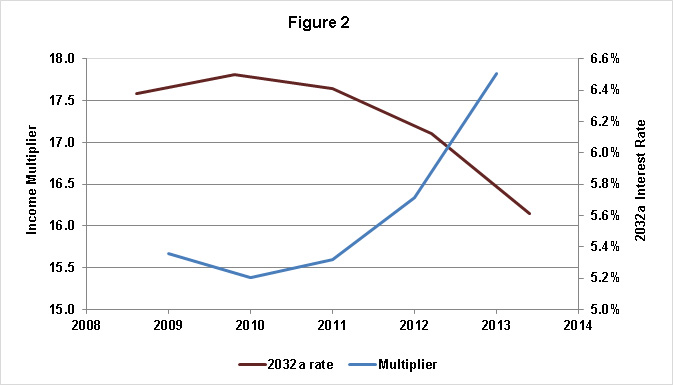 Again, the language in the revised law simply creates a different channel – uniform and defined by the typical case, and more stable through time as well.  It does not change any of the calculations of income, use of the 2032a rate, or any other item that results in the EAV calculation prior to the application of the restriction on the change in the certified value from year to year.

One important intent of both the old and new law is to reflect similar magnitude changes to any change in income that might accrue to any point of the PI scale through time.  The new language does not – despite some initially reported cases to the contrary – result in the same size change being applied to all points on the curve regardless of the income that parcel has the potential to generate, it only re-establishes a uniform channel to limit annual variations. The intent all along was that the channel restricting the movement from year to year would seldom be binding (not always be binding).  Further, the new language does not change the relationship between income and the tax rate applied after limited assessments are calculated.  That issue seems to be a bit missed in some conversations as well where arguments about the rate are treated as the problem that the change in the law was meant to address – that is not the case, though it should be acknowledged that the tax rates themselves are also sticky and do not respond to changes in assessments proportionally in many cases either.

This feature will be addressed in upcoming farmdoc daily posts that document the relative importance of agricultural versus non-agricultural tax base by county, and that further document the distribution of tax burden by PI and tax bill across the state.

Note:  The views expressed herein are solely the authors’ opinions and do not necessarily reflect those of entities with whom professionally affiliated.  All errors and omissions are the author’s alone.