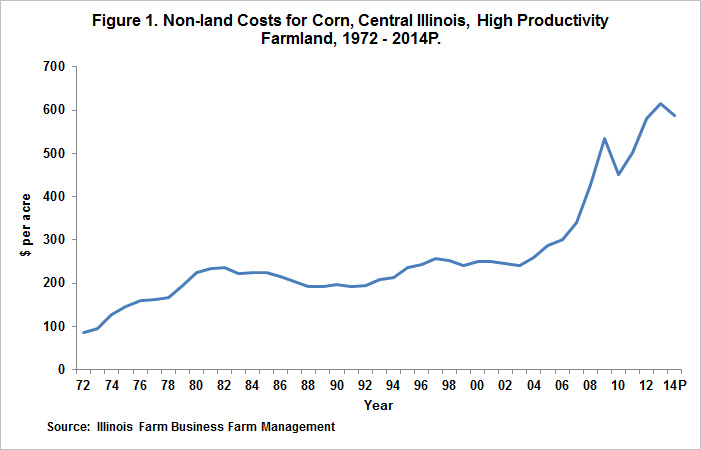 From 2013 to 2014, non-land costs are projected to decrease from $615 per acre to $588 per acre, a decrease of 4%, mirroring the decreases in the 1980s. The projected 2014 decrease resulted from lower fertilizer prices. However, these decreases may be eliminated due to high moisture of harvested grain. This could lead to higher drying costs this fall, eliminating some or all of the projected decrease coming from reduced fertilizer costs.

Moving forward into 2015, it is difficult to identify what costs will continue to decrease. To explore this issue, non-land costs are broken out to specific cost items.

Non-land costs for corn production are regularly made available on farmdoc (http://www.farmdoc.illinois.edu/manage/actual_projected_costs.pdf). Non-land costs are divided into three categories: direct costs – costs directly related to production, power costs – primarily related to machinery, and overhead – not directly related to production or machinery. These categories are further divided into cost items. Table 1 shows those cost items with their category identified. Items are arranged from the item with the highest increase from 2006 to 2013 to the item with the lowest increase. 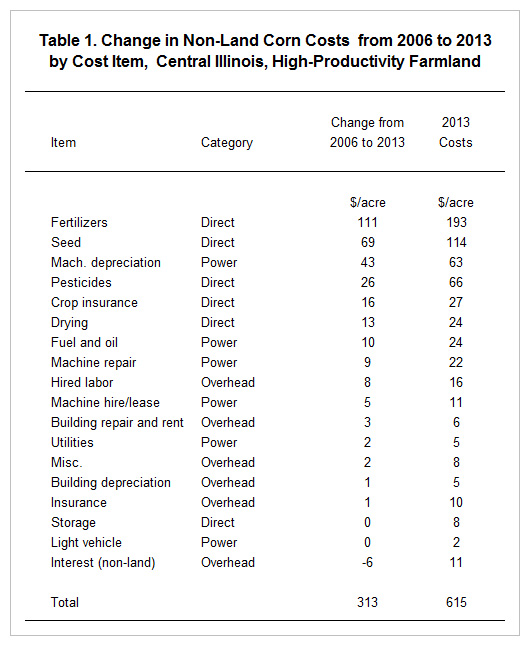 Seed costs increased by $69 per acre from 2006 through 2013, accounting for 22% of the non-land costs increase from 2006 to 2013. Several seed companies have released prices, indicating that seed prices will rise for 2014 levels (As Angela Mueller reported in a St. Louis Business Journal article on August 29, 2014). If seed prices do not decrease, any saving in 2015 seed costs will occur because farmers are purchasing lower priced hybrids.