Tomorrow’s (March 31) release of USDA’s Prospective Plantings report will focus attention on 2015 plantings of corn and soybean. Many expect corn acres to decrease and soybean acres to increase. Where acreage shifts could occur are examined by calculating 2015 expected corn minus soybean returns for counties in the United States. These projections suggest that shifts to soybeans are more likely outside the Corn Belt. Moreover, expected 2015 returns suggest smaller acreage shifts than in other recent years.

Construction of 2015 Corn minus Soybean Returns 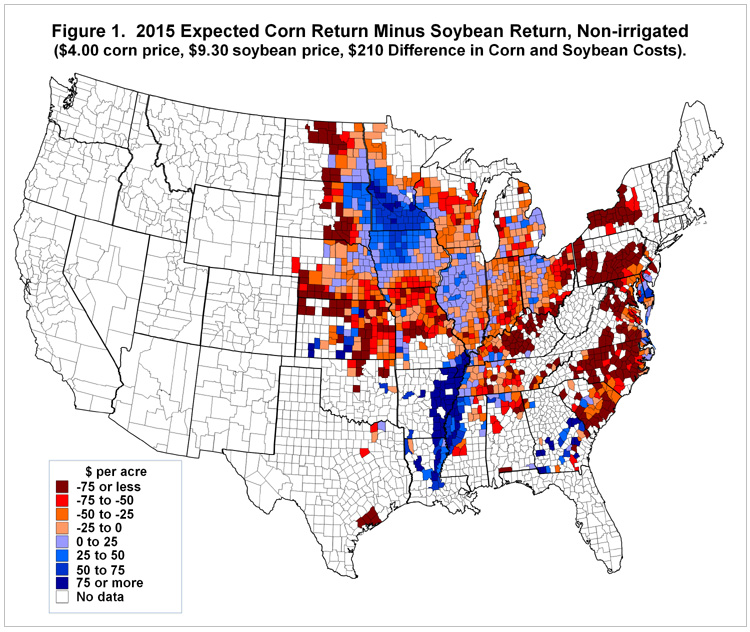 These values for each county are used in constructing the map in Figure 1:

Note that much of the Corn Belt has higher expected corn returns than soybean returns. Southern Minnesota, northern and central Iowa, and northern and central Illinois have higher expected corn returns (see Figure 1). Also, corn is expected to have higher returns than soybeans in the Mississippi Delta. Given that corn is expected to have higher returns in these areas, one would not expect large shifts from corn to soybeans in these areas. Shifts to soybeans likely are to occur outside the central Corn Belt and the Mississippi Delta.

2015 Expected Returns Compared to Other Years

Compared to several recent years, the geographical patterns shown in Figure 1 do not suggest large changes in 2015. To illustrate, two recent years are compared to expectations in 2015.

Corn planted acres increased from 92 million acres in 2011 to 97 million in 2012, an increase of 5 million acres. Soybean acres increased from 75 million in 2011 to 77 million acres in 2012. The large increase in corn acres was associated with higher expected corn returns than soybean returns over much of the United States, as illustrated in Figure 2. Figure 2 is calculated in the same manner as Figure 1 except that values in the spring of 2012 were used in constructing the graph. Corn expected returns were much higher than soybean expected returns over most counties in the greater corn-belt and Mississippi Delta. 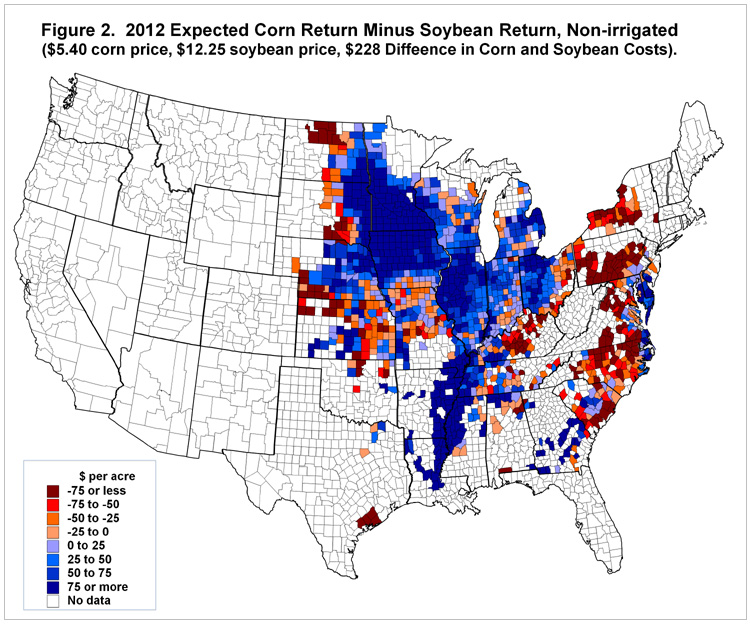 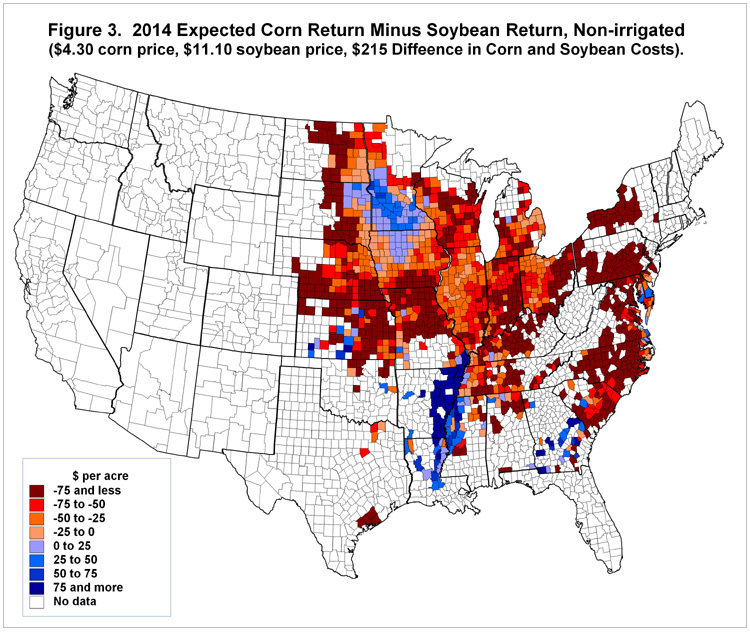 In 2015, corn has higher expected returns than soybeans in much of the center of the Corn Belt, suggesting that shifts to soybeans may occur outside the Corn Belt. Moreover, the expectations in 2015 currently do not suggest as large as shifts as occurred in 2014.

More insights into 2015 plantings will be gained with USDA’s release of the Prospective Plantings report on March 31st. This report then could lead to market reactions and changes in market prices, leading to future revisions in planting intentions.