CME Group’s recent announcement regarding the scheduled July 2 closing of most futures trading pits has triggered a range of reactions. News stories have covered related issues such as displaced floor traders and the effect on membership or “seat” prices, but there has been little discussion about the impact of these closings on the performance of the agricultural futures markets used by farmdoc daily readers. This article examines three questions of interest to market participants.

How will pit trading perform between now and July 2?

In the agricultural markets, the transition from pit to electronic has been less rapid in livestock (Figure 1) than in grains (Figure 2), but in both cases pit-traded volume has been decreasing steadily for several years. Over the next four months, pit volume will decline to zero, although it is anyone’s guess which of several possible “glide paths” these declines will take. Some floor traders will leave now; others will stick around until the very end, and possibly compete for the honor of making last trade in each market. In any event, liquidity – the ability to buy or sell without moving the price – in the pits will erode as volumes decline. Liquidity in the electronic markets may experience some modest improvement as the remaining pit-traded activity migrates to the Globex electronic trading platform. 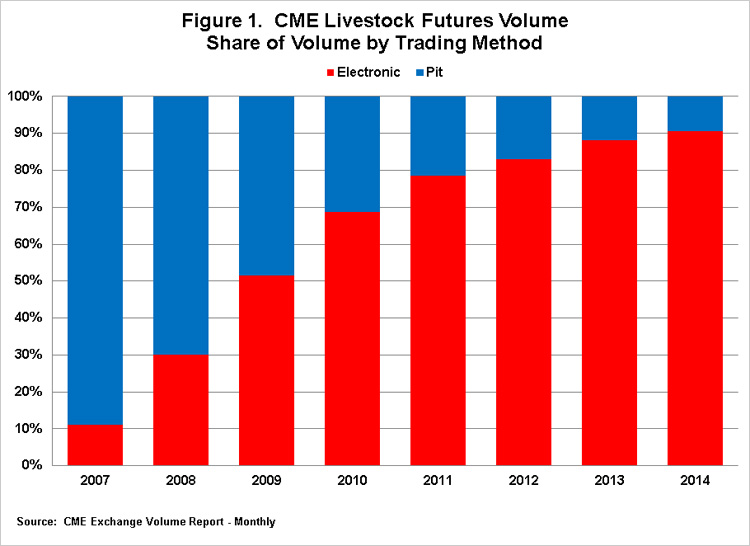 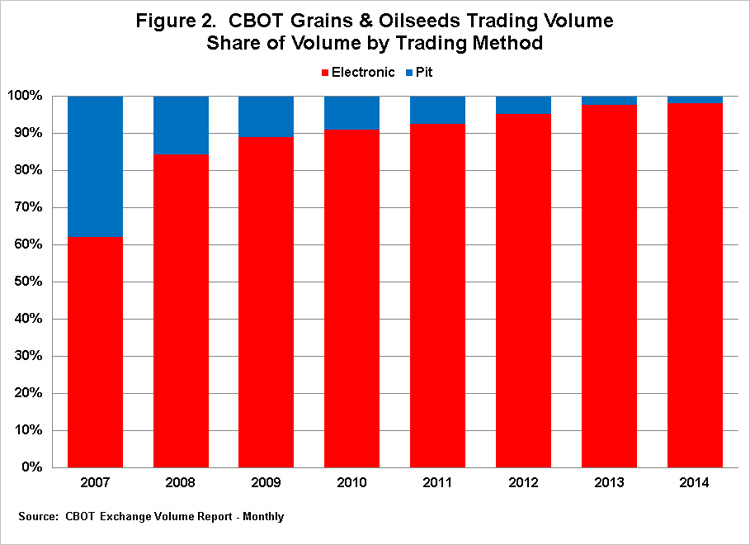 How will the decline of pit trading affect daily settlement prices?

An earlier farmdoc daily article examined the procedures used to determine daily settlement prices for a number of major commodity futures markets. Most of this information is still correct, but there has been one important change: livestock futures now use a volume-weighted average price, or VWAP. VWAP is “blended” price involving both Globex-traded and pit-traded prices, with the prices from each market weighted by the respective volumes; see here for complete details. Grain and oilseed futures including KCBT wheat use a similar VWAP procedure. One feature of the VWAP is that as pit-traded volumes decline, pit-traded prices will have a decreasing influence on daily settlement prices. This reduces the potential for daily settlements to be distorted by any illiquidity-induced volatility in the pits during the final days. When pit-traded volumes eventually fall to zero, daily settlements will be calculated using only Globex prices.

To answer this question we will first define trading costs to include all costs related to making a trade, including exchange fees, brokerage, and slippage. Exchange fees are incredibly complex: see here and here for the fee schedules used for CME contracts and CBOT contracts, respectively. When viewing these schedules it is important to remember that fees are assessed “per side” (i.e., once on the buy side and once on the sell side of each trade), so for a round-turn transaction these values must be multiplied by two (x2).

Slippage is the difference between the price at which you expect a market order will be filled – for example, the price of the last trade – and the price at which it is actually filled. This is frequently the largest part of execution costs, and is an often-overlooked cost of trading. Slippage is typically measured by the bid-ask spread, which is the difference between the highest bid, or buying price and the lowest ask, or selling price. The bid-ask spread shows how many “ticks” or minimum price increments a buyer or seller loses in getting a market order filled.

The Importance of a Tick

The End of an Era

The loss of open outcry trading marks the end of an era, much like the closing of the Chicago Union Stockyards in 1971. Also like the stockyards, pit trading is being displaced by a lower-cost way of doing business. In this sense, futures trading is like any other commodity-related business, because the lowest-cost method eventually drives out all others.