The arrest of Navinder Singh Sarao, a London-based trader, for actions that allegedly triggered the sudden collapse of the stock market, or “flash crash,” on May 6, 2010 – five years ago today – has produced an array of reactions from market observers. It has also re-opened the public debate over the impact of algorithmic trading on the futures markets, including those for agricultural commodities.

At the heart of both cases is the claim that he engaged in “spoofing,” or the placement of orders he had no intention actually executing and which were designed to mislead other traders.

In electronic trading, the total numbers of bids (orders to buy) and asks or offers (orders to sell) at each price are visible to the marketplace. This is unlike pit trading, where this information is not known. This collection of bids and offers over a range of prices is known as the order book, and it provides useful information about the prices at which orders are likely to be filled and in what quantities. The order book is constantly changing throughout the trading session as new orders enter the market and existing orders are filled or cancelled. 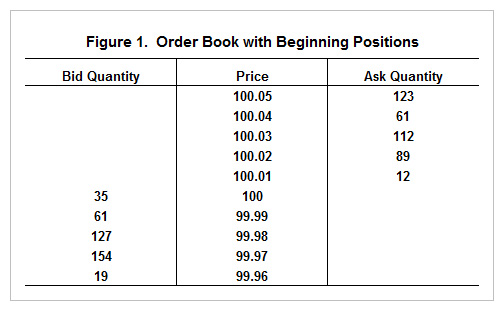 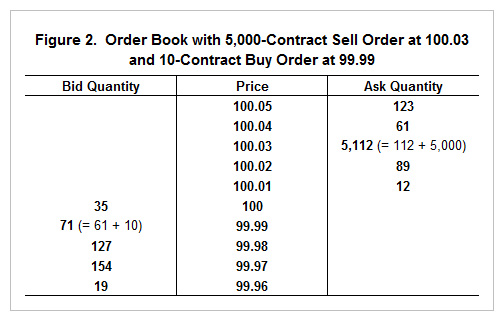 However, the sudden appearance of potentially heavy selling at 100.03 could force the market lower by causing other traders to make downward adjustments in their buying and selling prices. Buyers might lose interest if there is little chance of prices moving above 100.03, and other sellers might lower their asking prices to 100.02 or less to “get ahead” of the large pool of sell orders at 100.03. For purposes of our example, let’s suppose that the 61 sell orders at 100.04 are re-priced (cancelled and replaced) to a new price of 100.00 (Figure 3). 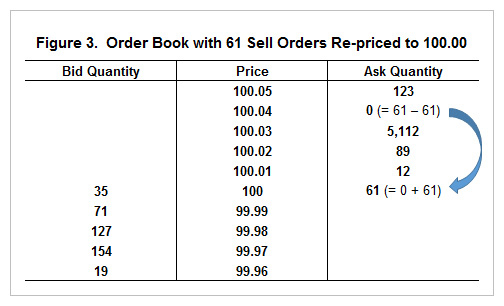 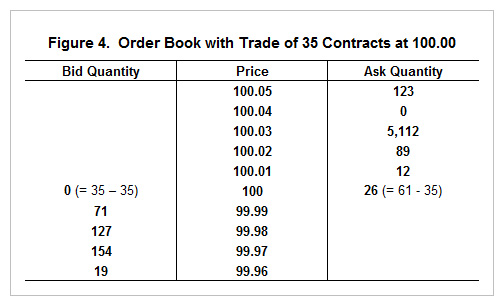 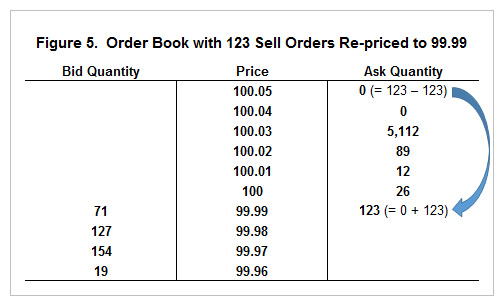 Next, 71 of these sell orders are matched against the pre-existing 71 buy orders, including the 10 belonging to our trader, leaving 52 unfilled sells at 99.99 (Figure 6). 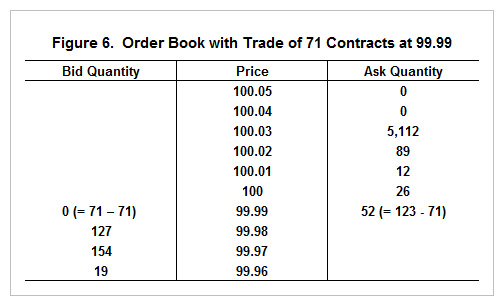 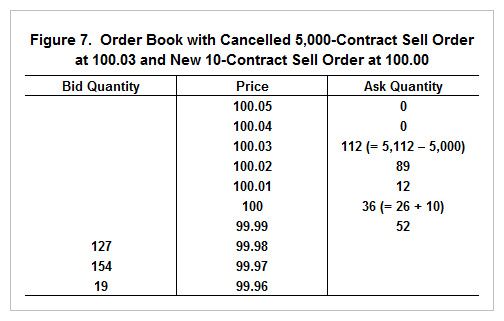 In effect, this trading strategy sets a trap for other traders below the market price, and uses the threat of heavy selling to drive them into the trap. It then removes the threat, which allows the market to bounce back so profits can be taken. Although this strategy produces extremely small profits on each trade, it exposes the perpetrator to little risk, and it can be used repeatedly during a single trading session. It also can be written into a computer program – the algorithm part of algorithmic trading – so little or no human involvement is required to carry it out. The CFTC estimates that Sarao made $40 million using this strategy, but it appears that the small size of the profits on each trade allowed him to avoid detection.

The key to this strategy is the 5,000-contract sell order in our example. Notice that the trader has no intention of actually selling at this price level, and this why it is called “spoofing.” But it may result in artificial prices as buyers and sellers react to the appearance of a large sell order that almost certainly will not be filled. This is the reason why spoofing – “bidding or offering with the intent to cancel the bid or offer before execution” – has been illegal since 2010.

What Sarao allegedly did was a little more sophisticated than our example – but only a little. Instead of placing a large number of sell orders at one price (5,000 at 100.03, in our example), he “layered” the orders at several consecutive prices (for example, 1,250 each at 100.03, 100.04, 100.05, and 100.06). Then, as the market price moved up and down, the computer program would cancel individual layers at certain prices and replace them at different prices to keep the lowest-priced layer 3-4 ticks away from the market price, and the highest-priced layer 6-7 ticks away. Presumably this was close enough to put downward pressure on the market, but far enough away to avoid having these sell orders executed. All adjustments were performed by the computer program; Sarao simply turned the program on and off.

The computer program adjusted Sarao’s position each time the market changed, and these adjustments were rapid and frequent. On just one day in 2010, Sarao cancelled and replaced orders for 7.4 million futures contracts. It was his trading activity, rather than his profits, that ultimately caused Sarao to show up on the regulators’ radar and led to his arrest.

The Rest of the Story

To this point we have summarized Sarao’s activities as described the Justice Department and CFTC complaints. In our next installment we will look at some of the details that could influence the outcome of this case.