Many farms’ net income statements are prepared using modified cost principles. Grain revenues typically includes crop sales and changes in grain inventory values between beginning and ending balance sheets. Much of the grain produced and unpriced in 2013 was valued on the end-of-year 2013 balance sheet at prices lower than that grain was sold in 2014. This resulted in sizable marketing gains, which could be significant contributors to 2014 net incomes on many farms. Marketing gains likely will not be large contributors to income in 2015. Marketing losses are likely for grain produced in 2014 and not priced until 2015.

At the end of 2013, cash grain prices were near $4.10 and many farmers likely valued grain near $4.10 per bushel on the 2013 end-of-year balance sheets. Corn prices increased during the first months of 2014, reaching highs of over $5.00 per bushel (see Figure 1). Depending on timing and amount of corn sales, farmers could have averaged $.40 to $.50 per bushel more than the $4.10 inventory value. Unpriced corn inventory of 125 bushels could have resulted in $40 to $75 per acre in marketing gains. Of course the amount of marketing gain depends on unpriced grain in 2013 year-end inventory and the price placed on this inventory, and the timing and amount of cash sales in 2014. 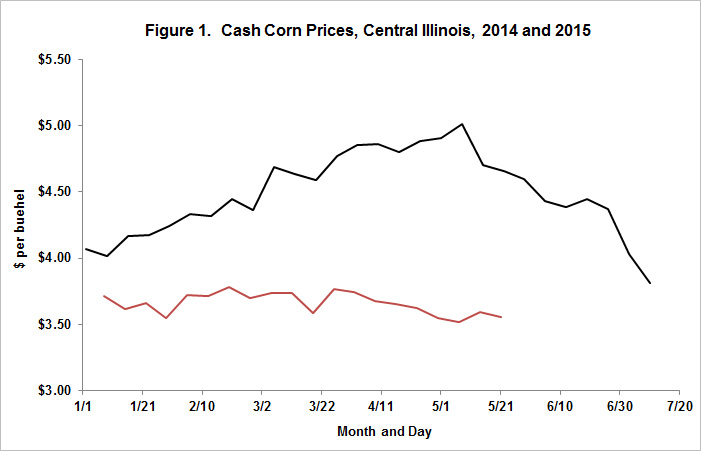 Large marketing gains for corn are not likely in 2015. At the end of 2014, corn was selling near $3.75 per bushel, and many may have used $3.75 for valuing corn on the end-of-year 2014 balance sheet. Corn prices have been stable to slightly decreasing in 2014 (see Figure 1). Many farms could have negative market gains on corn.

A $12.75 per bushel price could have been justified for valuing soybean inventory at the end of 2014. During the first months of 2014, soybean prices increased reaching highs of over $15 per bushel (see Figure 2). Marketing gains in 2014 of $1.00 per bushel are possible. If 25 bushels of unpriced soybeans were in the end-of-year inventory, marketing gains of $20 to $30 per acre are possible for soybeans. 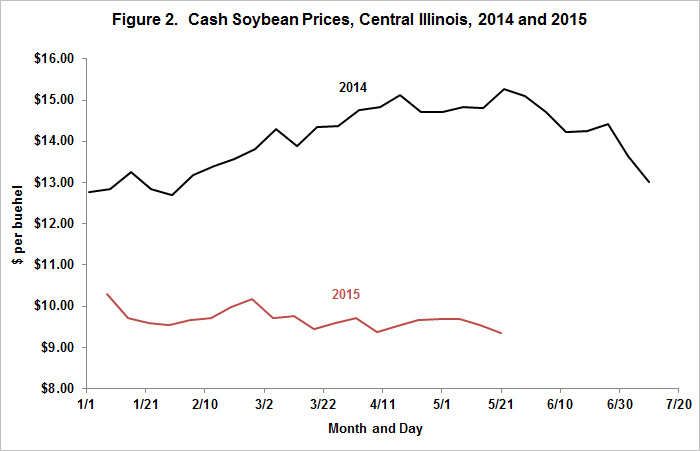 Many farms had relatively good net income in 2014. If marketing gains contributed to strong 2014 net income, the 2014 net income may not indicate the extent to which commodity price decreases will impact incomes in 2015.