download PDF
May 8, 2015
farmdoc daily (5):85
Recommended citation format: Newton, J. and T. Kuethe. "An Outbreak unlike Any Other: Perspective on the 2014-2015 Avian Influenza." farmdoc daily (5):85, Department of Agricultural and Consumer Economics, University of Illinois at Urbana-Champaign, May 8, 2015. Permalink

Historically, there have been only three recorded outbreaks of the avian influenza in the United States: in 1924, 1983, and in 2004. The 1924 and 2004 outbreaks were quickly contained and eradicated. The 1983 outbreak was more significant and resulted in the depopulation of 17 million chickens, turkeys, and guinea fowl in northeastern portions of the U.S. The current 2014-2015 outbreak is the worst case ever experienced in the U.S. It exceeds the previous 1983 record by nearly 9 million birds (and counting).

The first confirmed case of avian influenza (bird flu) during 2014-2015 was on December 19, 2014 at a backyard operation in Douglas County, Oregon with 130 mixed poultry birds. Now, more than five months since the first confirmed case, a state of emergency has been issued in Iowa, Minnesota, and Wisconsin. As of May 5, 2015 USDA’s Animal and Plant Health Inspection Service (APHIS) Update on Avian Influenza Findings indicated there have been 133 detections reported and more than 25.7 million birds have been affected in the U.S. The Centers for Disease Control and Prevention confirms that no human cases have been detected, and the risk to people from these bird flu infections remains low. 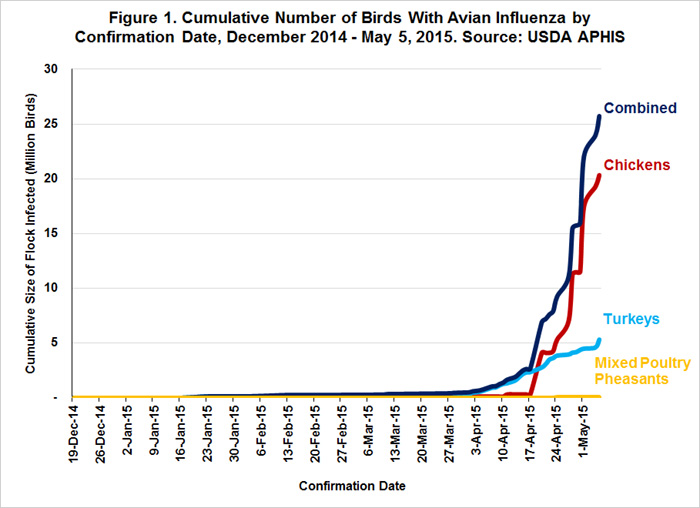 Initial reports downplayed the significance of this outbreak by comparing the number of confirmed cases with annual inventory and slaughter statistics (i.e. confirmed cases represent a small fraction of the 8.7 billion birds slaughtered each year). However, this is the largest outbreak of the bird flu ever recorded in the U.S. affecting 20.3 million chickens, 5.3 million turkeys, and 78 thousand mixed poultry and pheasant animals.

In order to put this most recent outbreak into perspective today’s article reviews the APHIS-confirmed cases of bird flu by species with respect to USDA Census identified county-level populations of layer chickens, and sales of broiler chickens and turkeys. Results suggest that the current bird flu outbreak is highly concentrated in hen-laying and turkey producing regions. While the egg supply is expected to quickly adjust, the bird flu may have longer lasting effects on the supply of turkeys available during Thanksgiving. Additionally, if not quickly contained the bird flu presents an infection risk to the broiler population in southern portions of the Mississippi flyway. Finally, based on current infection levels, the bird flu outbreak is not expected to significantly alter corn consumption for feed use during the 2014-15 marketing year. 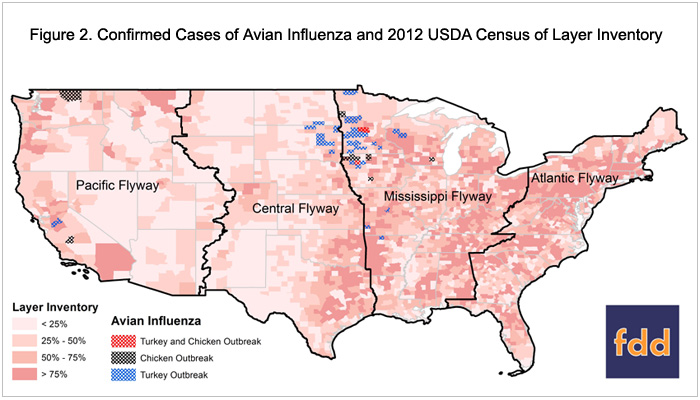 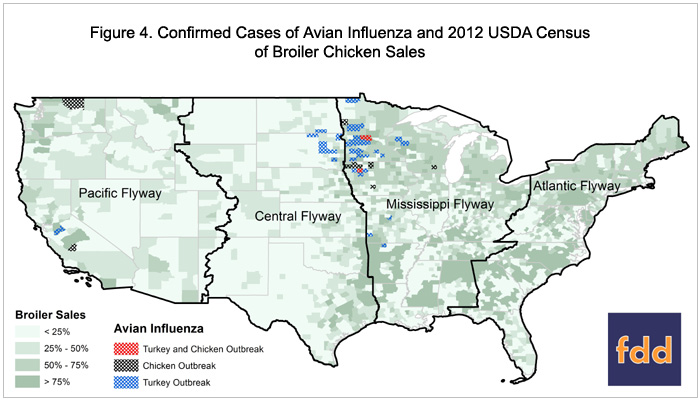 In each of the three maps, the red cross-hatching represents the two counties with confirmed bird flu findings for both turkey and chickens. The black and blue cross-hatching represents counties with confirmed bird flu findings for chicken and turkeys, respectively. The map also shows the four migratory flyways, as defined by the U.S. Fish and Wildlife Service: Pacific Flyway, Central Flyway, Mississippi Flyway, and Atlantic Flyway. The counties are shaded by the volume of poultry sales or inventory per square mile according to the 2012 Census of Agriculture. While more recent information of poultry production is available at the state level, the USDA Census provides the only record of county-level bird populations or sales.

As evidenced by Figures 2 and 3 the concentration of birds infected with the bird flu is most predominant in hen-laying and turkey producing states and is distant from states with high concentrations of broiler production, Figure 4. However, as figure 2 also demonstrates, the population of layers is highly dispersed in the Mississippi flyway. Bird flu infections along this migratory pattern have been confirmed as far south as Arkansas with 40,020 infected turkeys in Boone County. While, there have been no recent cases of the bird flu in the southern portion of the flyway, risk of the virus spreading to the broiler population in the Southeast is an additional concern for the industry as migratory birds move back into the South during the fall and winter months.

On a national level, the bird flu outbreak in chickens represents a small portion of the total layer inventory which the USDA estimates at 362 million as of March 2015. Using this estimate, the 20.3 million confirmed cases of bird flu in chickens represents just 5.6 percent of the layer population. However, this outbreak is historic in proportion to previous outbreaks, and state-level data presents a much more alarming outlook.

USDA’s April 23 Poultry Slaughter Report indicated that 19.9 million turkeys were slaughtered in the U.S. during March 2015. As a percentage of the monthly slaughter total, confirmed cases of bird flu in turkeys represents more than one-quarter of the slaughter volume at 26.6 percent. Minnesota is the largest producer of turkeys slaughtering an average of 3.7 million per month. With 3.6 million confirmed cases in turkeys in April 2015, 97 percent of Minnesota’s monthly slaughter volume is represented by confirmed bird flu cases during April alone. It has been suggested that due to the time needed to feed turkeys to slaughter and the large proportion of the monthly slaughter affected by the bird flu, turkey supplies during Thanksgiving 2015 could be disrupted.

For chickens, USDA’s April 21 Chicken and Eggs report indicated there were more than 59 million layers producing 1.4 billion eggs in Iowa during March 2015. With 18.6 million confirmed cases of the bird flu in Iowa’s chicken population thus far, this total represents the equivalent of 31 percent of the layers and more than 400 million eggs. The poultry industry will likely adjust to tighter egg supplies, but the presence of the bird flu in the chicken population will likely continue to limit export opportunities for broiler meat until the virus is contained.

Finally, with respect to feed use, USDA ERS Feed Grains Yearbook indicates that for the current marketing year poultry is estimated to represent 34 percent of grain consumption among all grain consuming animal units. Given USDA’s April 9 World Supply and Demand Estimates projection of 5.25 billion bushels of corn consumed in the feed and residual use category, corn use for feed by poultry animals is anticipated to total 1.8 billion bushels during the 2014-15 marketing year. USDA poultry inventory and slaughter data suggests that, across the U.S., a negligible percentage of the monthly poultry population is affected by the bird flu. As a result, the decline in feed use attributable to the bird flu is not expected to significantly alter the corn balance sheet.