This article examines the variation across counties in ARC-CO (Agriculture Risk Coverage -County program) payments per program base acre, using estimated corn and soybean payments for the 2014 crop year as an illustration. Understanding the variation in payments is important to understanding the impact and operation of ARC-CO, as well as other revenue and yield based risk programs. In particular, the non-trivial variation in county payments by ARC-CO implies that the decision by Farm Service Agency (FSA) to make payments based on the county in which the FSA farm is administered not the county in which the FSA farms lies also potentially non-trivial.

Estimated per acre county payments were computed for our August 6, 2015 farmdoc daily article, “Estimated National 2014 ARC-CO and PLC Payments.” The estimates were made using county yields and U.S. average price for the 2014 crop year. County yields are from USDA, National Agricultural Statistical Service (NASS) because FSA has not yet released their estimates, which are based on Risk Management Agency data or other sources should NASS data be unavailable. Other details of the analysis are discussed in the August 6, 2015 article. Corn and soybeans are a useful combination to examine because each has over 50 million program base acres, each has over 90% of base acres enrolled in ARC-CO, and 2014 crop year payments will be large for corn but limited for soybeans. Our estimate of ARC-CO payments for the U.S. total $4.1 billion for corn vs. $0.4 billion for soybeans.

Per Acre County Payment Variation within a State 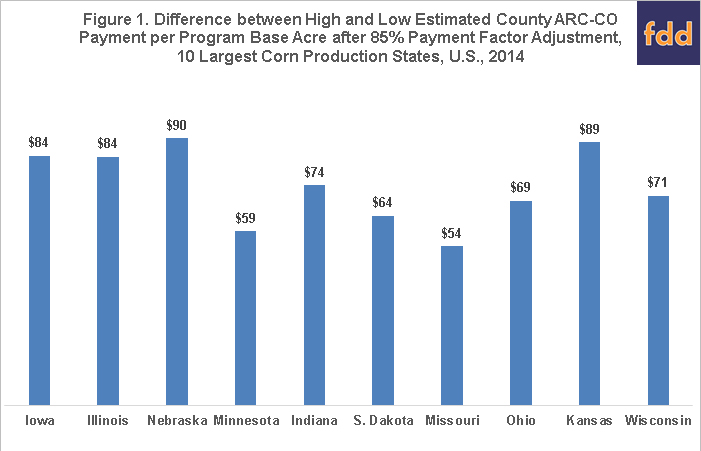 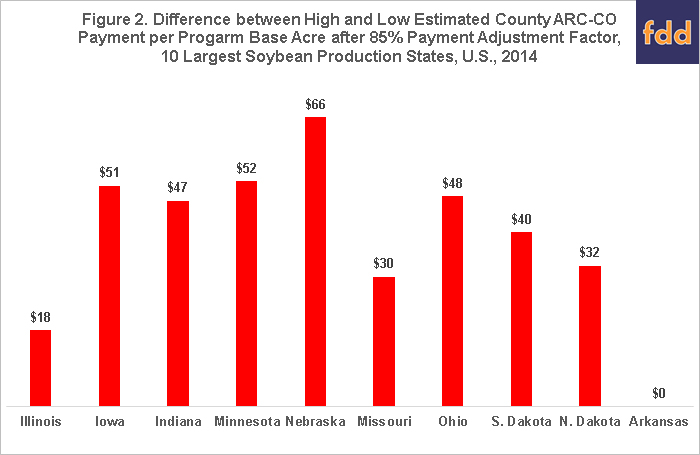 The agro-climate is usually more similar among adjacent counties than non-adjacent counties. To provide insights into the variation in ARC payments that exists among adjacent counties, a random set of data was drawn. Specifically, all counties for which ARC-CO corn payments were estimated were alphabetized by state and then by county within the state. Every 50th county was selected. Then, a direction was selected, cycling alphabetically through east, north, south, and west for each succeeding county. If data were not available, the next available county or direction was selected with the stipulation that the same county had to be used for both corn and soybeans. The resulting data set was composed of 28 counties in 21 states. No state had more than 2 counties. 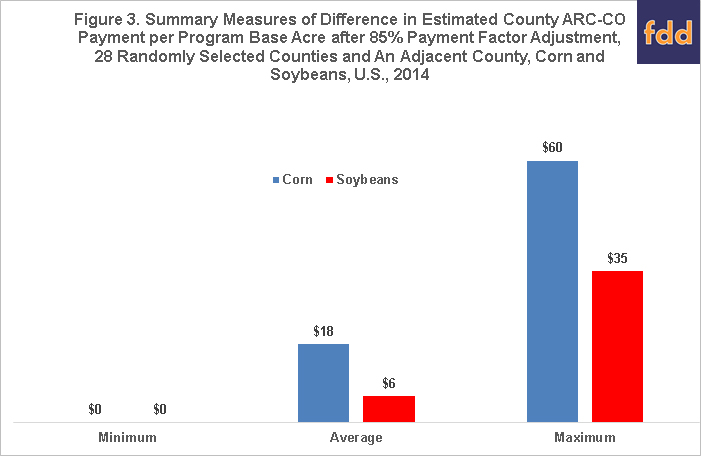 1. The no-to-low variation in county per acre payment rates in Arkansas and Illinois soybeans probably reflects the consistently high yields that occurred throughout both states.