The USDA recently released the results of the 2014 Tenure, Ownership, and Transition of Agricultural Land (TOTAL). TOTAL is a special study and part of the Census of Agriculture that collects data from landowners and landlords of agricultural land, including non-operator landlords. The survey collected data in the 48 contiguous states on landlords’ acres rented out, income, expenses, assets, debt, land transfer plans, and more. One of the most striking findings of the survey is that Illinois leads the nation in total agricultural rent at $3.8 billion. This article explores some additional highlights of Illinois landlords from the report.

Table 1 shows the number of landlords by ownership arrangement for Illinois, the Midwest, and the nation as a whole. TOTAL defines the Midwest as Minnesota, Iowa, Missouri, Wisconsin, Illinois, Indiana, Ohio, and Michigan. The results suggest that non-operator landlords – landowners who rent out agricultural land but do not operate land themselves – account for the majority of landowners in each of the three geographic definitions: 88.1% in Illinois, 84.9% in the Midwest, and 86.9% in the contiguous US. Illinois, for example, had 131,337 total landlords in 2014, only 15,684 of which are farm operators. 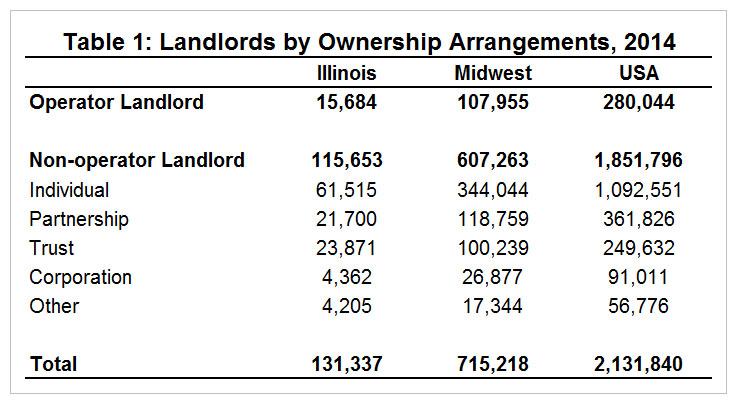 The non-operator landlords are further classified by five ownership types, the most common of which is individual ownership, accounting for 46.8% of all landlords in Illinois. Trusts were the second most common ownership arrangement at 18.2% of all landlords. Corporations and other arrangements each account for approximately 3% of landlords. Further, the proportion of landlords by ownership type and operation status is roughly equivalent across the three geographic definitions.

TOTAL reports that in 2014, Illinois was home to 15.88 million acres of rented farmland (including cropland and pastureland). Figure 1 shows how the land was divided among the ownership arrangements reported in Table 1. While only 11.9% of landlords also operate a farm (operator landlords), these landowners account for 16.8% of total rented acres which suggests current operators tend to rent larger tracks, all else being equal. The same relationship can also be observed for Corporation and Trust ownership arrangements. While Trusts account for just 3.3% of all landlords, for example, they represent 5.3% of the rented acreage in Illinois. 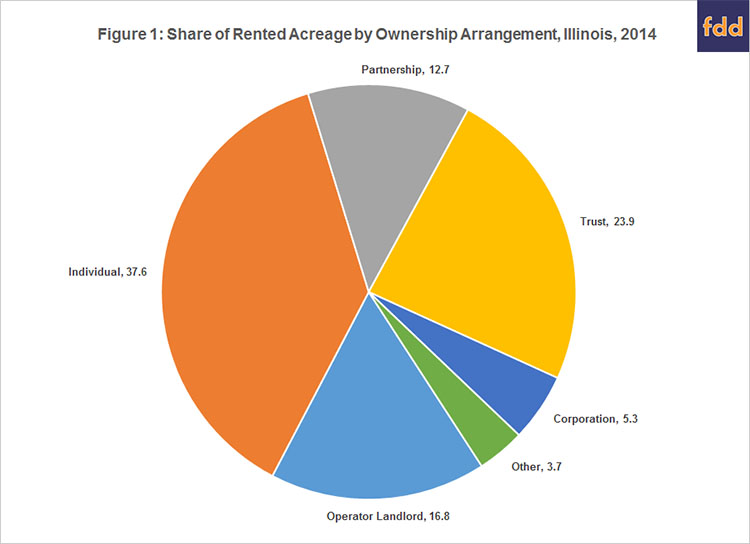 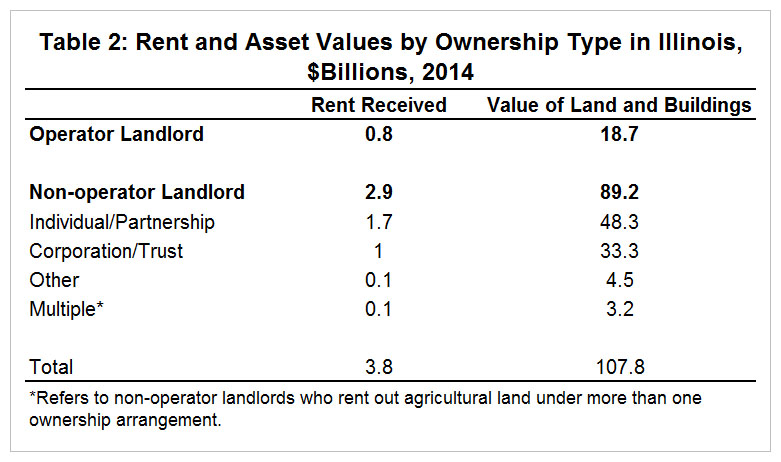