Enterprise budgets provide an estimate of potential revenue, expenses, and earnings or losses for a specific enterprise. Enterprise budgets are often one of the building blocks to creating a whole-farm plan. They are also extremely useful in computing breakeven prices. This article uses a cash crop farm in Indiana to illustrate the components of an enterprise budget and to compute breakeven prices for corn and soybeans. The format of the enterprise budget presented below closely follows that of the Purdue Crop Cost and Return Guide (here). The Illinois crop budgets (here) use similar cost items, but are laid out differently. Both budgets use all costs, thus breakeven prices could be computed using either budget layout.

Table 1 presents an enterprise budget for rotation corn on average productivity soil in Indiana for 2016. Trend yield multiplied by the expected harvest price results in a market revenue of $627 per acre. Costs are presented on a per-acre and a per-bushel basis. Both of these figures can be useful when examining a particular cost item. Per-acre costs are typically easier to benchmark (with other farms or using historical information for the same farm) while per-bushel costs are extremely useful in examining the impact on a particular cost item when making a change that impacts yield per acre. Total variable cost is $429 per acre ($2.60 per bushel). Subtracting total variable cost from market revenue and adding government payments yields an expected total contribution margin of $223 per acre. For the enterprise to breakeven, the total contribution margin needs to be at least as large as total overhead cost. For 2016, the total contribution margin for rotation corn is expected to be substantially smaller than total overhead costs, resulting in a loss per acre of $134. Breakeven price is computed by adding total variable cost to total overhead cost, subtracting government payments, and dividing the result by expected yield per acre. Breakeven price for corn is estimated to be $4.61 per bushel. 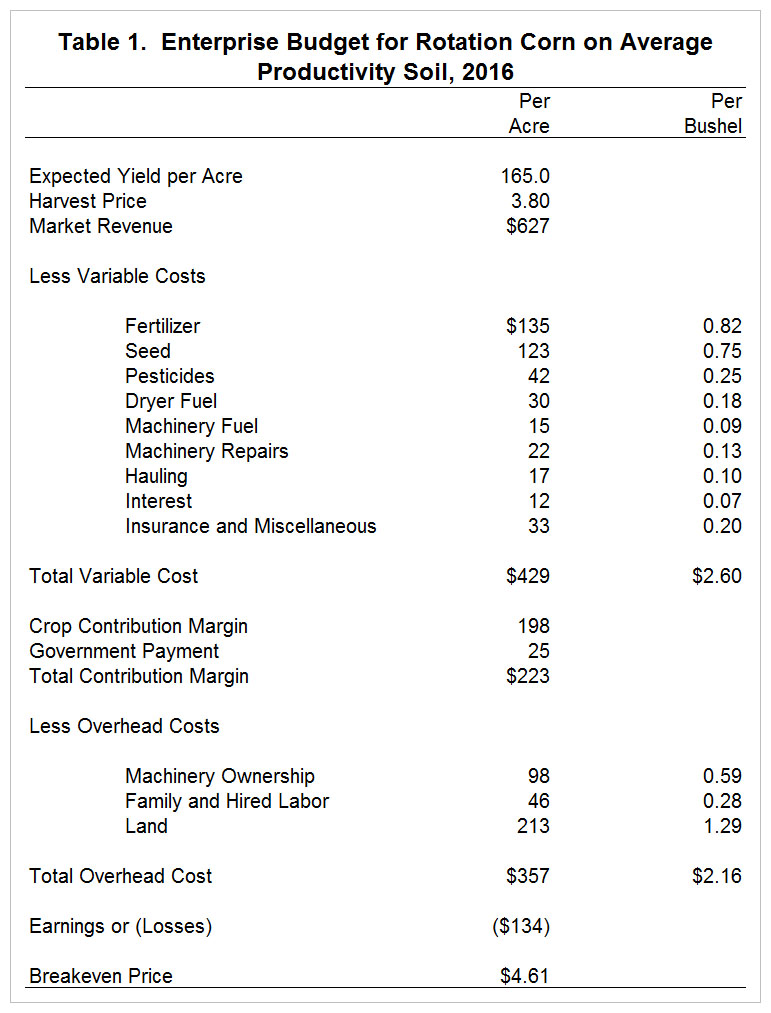 Table 2 presents an enterprise budget for rotation soybeans on average productivity soil for 2016. Trend yield multiplied by the expected harvest price results in a market revenue of $420 per acre. Variable cost is $216 per acre or $4.32 per bushel. After subtracting total variable cost from market revenue and adding government payments, total contribution margin per acre is $229. Though slightly larger than the expected contribution margin for corn, the contribution margin for soybeans is still not large enough to fully cover overhead costs. Expected loss per acre is $128. Breakeven price for soybeans is estimated to be $10.96 per bushel. 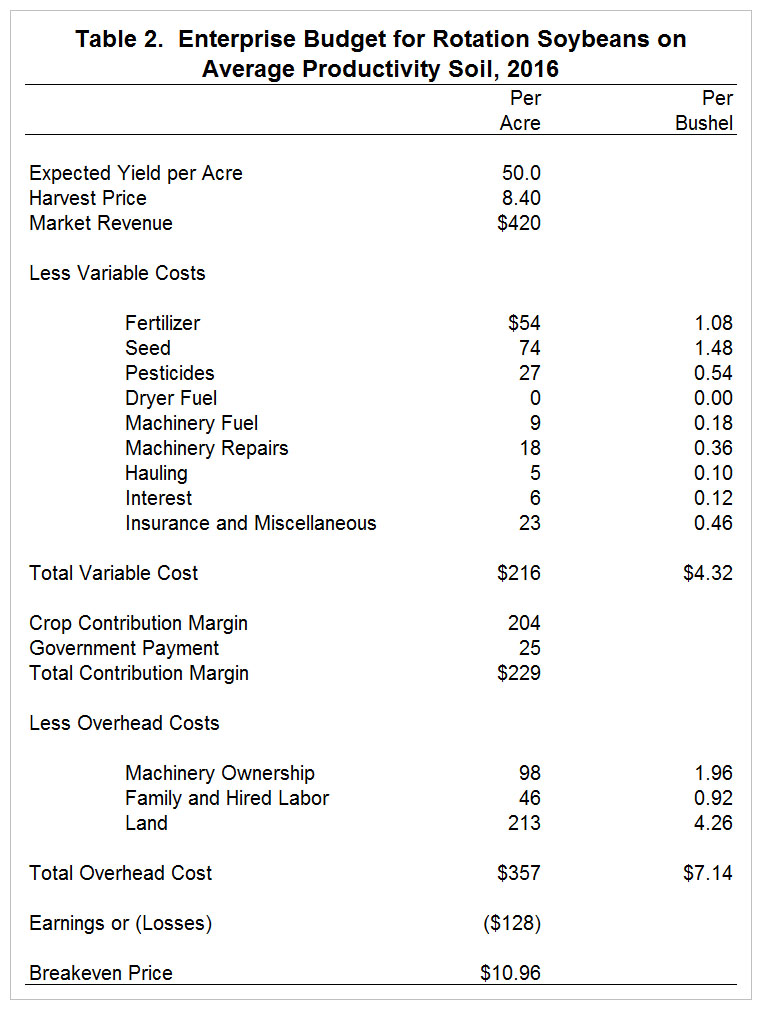 It is important to note that opportunity costs for unpaid family and operator labor, owned machinery, and owned land are included in tables 1 and 2. If we want to compare revenue, costs, and earnings between farms; it is important to include these opportunity costs. Also, if we want to gauge the return to operator time and owned assets, these opportunity costs need to be included in enterprise budgets. The negative earnings or losses per acre depicted in tables 1 and 2 suggest that owned assets are not receiving market rates of return.

As a final note, enterprise budgets can be used to make cropping decisions for the upcoming year. Though both corn and soybeans show losses in tables 1 and 2, the loss per acre for soybeans is less than the loss per acre for corn. The contribution margin for both crops is positive. In the short-run, a farm should continue to produce if it is covering variables costs (i.e., the total contribution margin is positive). In the long-run, all costs (variable and overhead costs) need to be covered. The higher contribution margin for soybeans does not imply that the farm should produce all soybeans. It does, however, imply that the farm should consider producing both corn and soybeans, rather than focusing on corn, which some farms have done since the start of ethanol boom in 2007.