Big Data already is being extensively employed at the genetics and consumer ends of the food and ag supply chain. This article will stress the potential for capabilities and knowledge generated at these levels to affect new opportunities within production agriculture. This is the fourth of a six part series on Big Data and Agriculture.

Production agriculture is the focus of this article series. However, managers in many industries have learned that strategic change often can emerge from firms and technologies that aren’t their direct competitors. In the early 1990s, Walmart, Kmart, and Target undoubtedly understood the competitive landscape of US retailing. The firm called Amazon did not exist. Shortly thereafter, Amazon and others used novel technologies and approaches to redefine retailing.

Changes that could be strategically important to the farm sector can originate outside of agriculture. Therefore, this article illustrates how Big Data is fueling change in the broader food sector. In addition to being of interest in themselves, such developments have the potential to affect how output from the farm will be produced and marketed.

Consumers, Genomics, and Everything Between

The actions and attitudes of consumers are an active source of Big Data. Figure 1 identifies just a few initiatives of major retailers and manufacturers in the food sector. 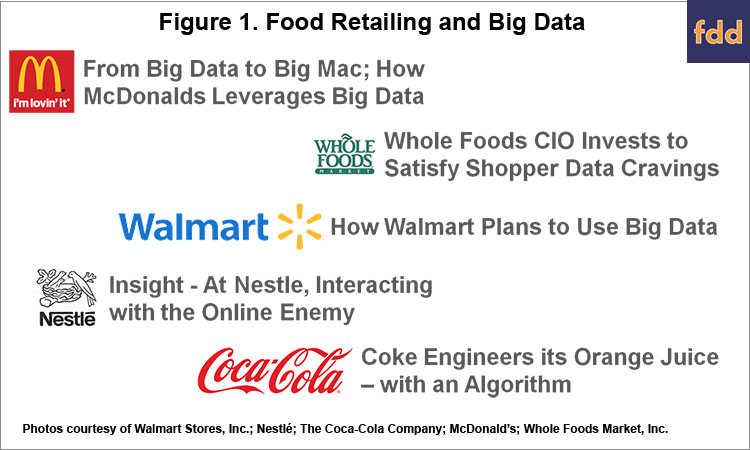 The range and extent of these initiatives provides insights as to likely directions for food retailing. For example:

It is interesting to speculate about the direction by which the motivation for change and the adoption of Big Data could occur. As illustrated by the preceding Coca-Cola example, needs identified at the consumer level can now be transmitted to affect operations at the farm level.

However, Big Data’s application and the potential for strategic change exist at the beginning of the food supply chain as well as at the consumer end. Genomics is today’s application of genetics. Figure 2 provides examples of the emerging role of Big Data there. 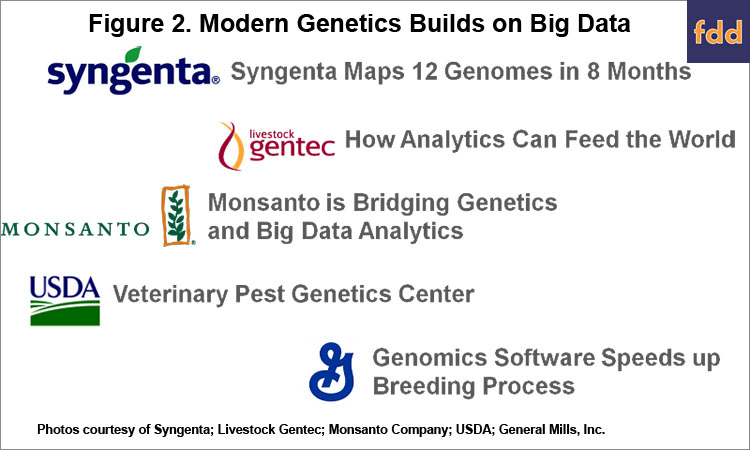 The consumer and genetic level applications shown in Figures 1 and 2 present just a small sampling of headlines documenting Big Data application in the food sector. These applications are perceived as sufficiently important that food retailers and manufacturers strive to be recognized as leaders in Big Data implementation.

Headlines from several media articles were listed earlier in this article. These focused on exciting potential applications of Big Data throughout the food sector.

Figure 3 emphasizes the linkage role of data. Traditionally in agriculture, data management (capture, analysis, and communication) has been relatively expensive. Commodity production and marketing systems developed to optimize performance -given that data management was costly. Advances in the range of technologies associated with Big Data, however, are markedly changing those cost/benefit relationships. 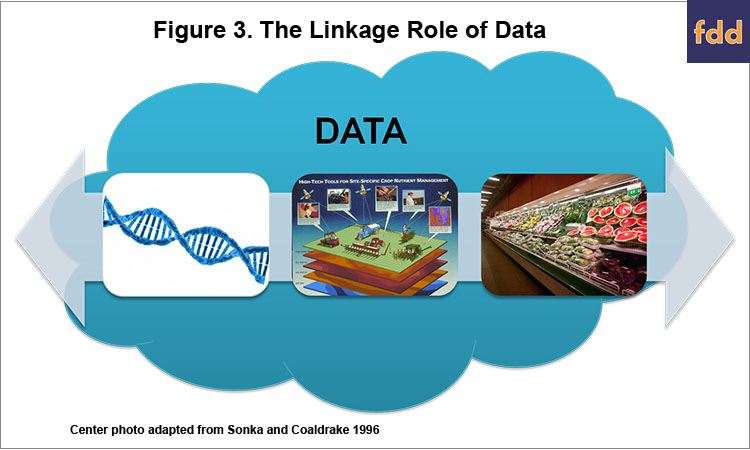 Novel technologies and their application are driving these changes in costs and benefits, not only on the farm, but also throughout the food sector. Many, and probably most, of the insights regarding consumer preferences and genetic capabilities that are discovered through use of Big Data tools will be directly employed there. Other times, maximizing value creation will require linkages with and through the farm sector. Exploiting those possibilities could provide profitable opportunities for some at the agricultural production level.

Roush, W. "Inside WalmartLabs: How the Former Kosmix Team Plans to Help the World's Largest Retailer Get Social and Mobile." Xconomy, August 1, 2011. http://www.xconomy.com/san-francisco/2011/08/01/inside-walmartlabs-how-the-former-kosmix-team-plans-to-help-the-worlds-largest-retailer-get-social-and-mobile/.